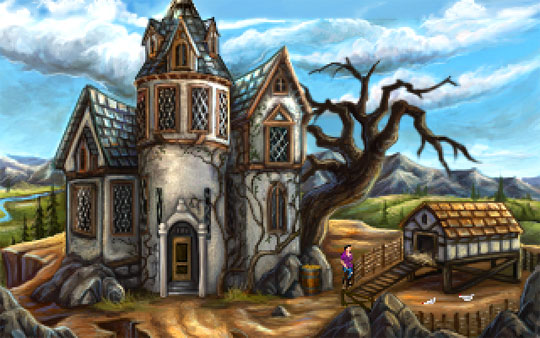 This is an old-school RPG, which means gameplay requires a lot more patience than many modern games. You click on everything in a room to see if you can pick it up or move it to find a clue. You use the eye icon to click on everything in sight and most of the information is pointless. You have to figure out what item to click on before you talk to someone to get the information you need. You pick up everything the game will let you but you have to time it right otherwise you could suffer severe consequences. At the end of the game your inventory will probably have a bunch of stuff you never needed but you had to pick it up because maybe that bowl would be needed an hour or two later into the game and the only way to pass that point is starting back at the beginning. When you first start playing you start back at the beginning several times, back in the day you wouldn’t have been surprised if you had to lose an hour of playtime or more because you missed a book on a shelf or forgot a spoon hanging in a kitchen. You save after just about every thing you did (a habit I still follow today) and starting back at your last save point a couple dozen times to try to figure out what you had to do next was just part of the game. It can be frustrating and even boring to some degree but once you figure out what you are supposed to do next when you haven’t been given the slightest clue what you are supposed to be doing there is a really strong sense of accomplishment. It requires a great deal of patience and attention to detail that has been phased out of most games over the years. It also helps to develop strong problem solving skills and patience in getting things accomplished which are pretty good skills to have in general. Controls are point and click, with a pull down menu to choose different actions such as look, walk, touch, etc. 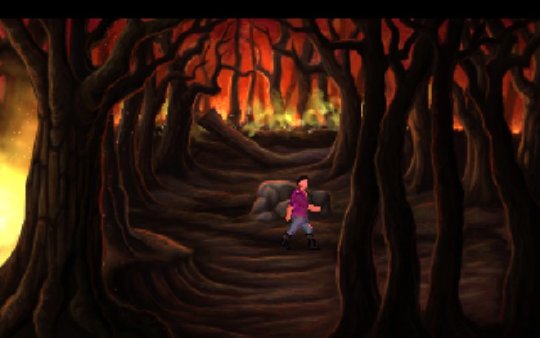 Graphics/Audio:
Though cleaned up like an old print of a film, the game retains its graphic style and sounds which makes it a fun blast back to the past. The graphics are so low resolution that a lot of gamer rigs will actually not be able to get down to the recommended level of resolution but I found getting close is good enough. If you try to play the game without lowering the res you will either find yourself unable to see the game screen or it will be in a box smaller than a PSP screen which makes it kinda hard to see and difficult to click on things. It is nice to see the hand painted backgrounds and portraits, this was obviously a labor of love, which maintains the graphic feel of the original.

Playtime/Cost:
Playtime will drastically vary depending on each person’s decisions and problem solving skills. The potential time is enormous for someone who isn’t used to the game. But since it is completely free it is a game to try out and if you don’t like it you are out nothing but time and if you love it then you can fill lots of hours with it.

Last Call:
This game is a gift, not just because it is free but because it gives older gamers a chance to relive their roots and younger gamers the opportunity to experience gaming history. I recommend everyone get it to try it out, but I particularly would point it out to parents to help their children learn the consequences of actions and improve problem solving skills and patience, which are three things no person can have too much of!