Alright, I’ll be the first to say they asked for it. Okay, maybe not the first since there has been TONS of debate, but I will say it at the beginning of my review. Two Worlds publisher Zuxxez’s Dirk Hassinger really stirred up a hornet’s nest in the gaming community when he said in his opinion that Two Worlds was deeper and more complex game than Oblivion. Two Worlds is an excellent game and Oblivion is an excellent game. While they have similarities that could be compared and contrasted for pages, I will judge Two Worlds II – the latest game in the Two Worlds series, on its own merits (or lack thereof) and leave the Oblivion/Two Worlds debaters to their YouTube comparison posts.

Atmosphere:
This game starts off setting a great atmosphere with an excellent cinematic opening scene where the story is quickly established through one character’s flashbacks. I won’t spoil anything but they set the mood and give you a pretty strong suggestion of who are the good guys and who are the bad guys while also showing the dark times that have befallen the land. The cinematics throughout the game are excellent as is as the musical score. They create tension when there needs to be and peaceful sounds accompany moments when you are just traveling and taking in eye candy. It is subtle but well done, honestly if I wasn’t reviewing it I might not have been looking for such things and just gone with the excellent flow the atmosphere develops. Also, when the game wants to limit where you go it doesn’t just stop you at an invisible barrier. It first thins out your interactions with other creatures to hopefully make you bored of traveling that way and, if that doesn’t work, it puts a landmark such as a mountain ridge in your way to help maintain your gaming suspension of disbelief. One of the only problems with all this is that it can be taxing on the system and, since it is pulling all this graphically-rich expanse from a disk, it pauses to load things often. This frequent loading can dampen the mood and get the player a little edgy, because it means that either a big piece of eye candy is about to load or a big bad beastie. If you are riding fast on your mount, you might get both at the same time! Another point to bring up are the seemingly out-of-place, random sections placed in-between cinematics at the beginning of the game. A good example of this is a cinematic that leads to a bridge and ends. You then walk the character across the bridge and, as soon as you reach the other end, yet another cinematic starts. This may simply be a way for the designers to break down larger cinematics into more manageable ones but to the player it just comes across as strange. For the most part, the voice acting isn’t too great either – sometimes surprisingly bad like watching a late night ‘D’ movie. It almost becomes comical which, unfortunately, also distracts from what you should be paying attention to. 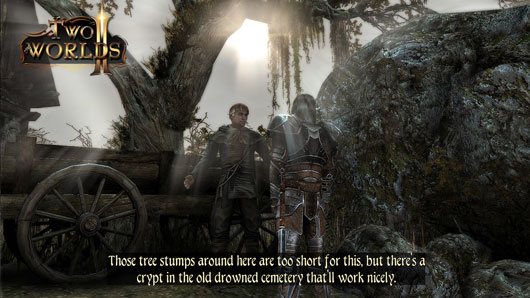 Gameplay:
Most of the time the player is in third person mode but, on occasion, the player has the opportunity to enter Sniper Mode – a first-person shooting mode. This is a nice mix similar to Mass Effect 2 and, once you get used to the controls, can be transitioned back and forth between quite easily. You also have the opportunity to ride mounts which have different control sets but are also well done and effortless once you get the hang of it. Targeting is character facing for initial lock and, though a lock can sometimes shift if more than one enemy is in front of you, it holds well and allows for guerrilla tactics – hit, retreat, or sidestep to avoid their attack and attack again. Range attacks are particularly effective in this kind of play, though there is definitely something to be said for a nice sneak assassination. With the skill table set up the way it is, this is completely an option. Skill points are given to be divided among all the classes and professions so you can decide if you want to get your lockpicking up before your fire arrow skill or blacksmithing ability. It is possible to make a very well-rounded character, though in the end it might prove better to make the character strong in one class and profession instead of spreading your points too thin. If you decide to do that or even change class emphasis between dungeons and map exploration you can do so by going to an NPC called the soulpatcher who will respec your points for a reasonable amount of in-game cash.

The game really tries hard not to limit your gameplay options by allowing an almost sandbox-like environment, filled with side quests and achievements while also having a main storyline that can be strictly adhered to. There are even multiple ways to achieve certain goals – some shady, some noble, and some where too much trust or naivety causes you to fail. The choices are yours and will effect how some NPCs respond to you for the rest of the game and, in some cases, whether or not a quest can be completed at all. When exploring, it is very easy to head in some direction too far and wander into an area with big baddies that can kill you in a single blow – so, explore with caution and save often. The game has auto-save, but I found sometimes the auto-save might glitch whereas the selected saves always worked. On the subject of the baddies – one of the few complaints I have about Two Worlds II is that there isn’t much of a variety to them. When you run into a new type you get excited and sometimes go on a killing spree (poop flinging baboons!) and then move onto another section of the map only to find the same enemy, maybe just a little tougher or a slightly different attack style. There really aren’t that many different enemies, in most cases it is just a variation on the same ones with either a slightly different name or maybe slightly different color. For a game with huge maps and great graphics, it almost felt like they ran out of time to develop enemies so they just used the same bunch over and over. Luckily, the ones they do have are fun to fight. 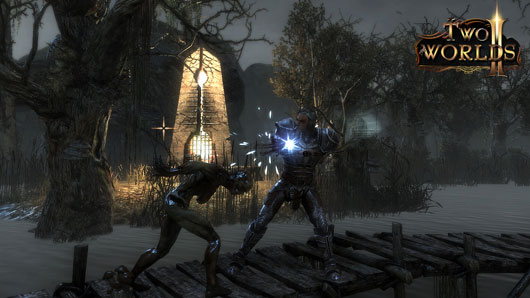 Controls:
The controls are pretty good, but they definitely have a feel like they were originally designed for the PC and then adjusted to work on a console. In some ways I find this appealing, because generally RPG content is considered to be more expansive and in-depth on the PC. If the developers tried to keep all the positives of a keyboard/mouse system and adapt them to a limited amount of buttons and sticks, then there is a good chance that console gamers will get a treat. The only drawback is that, to achieve this some buttons, had to be assigned a whole bunch of tasks that a whole keyboard and mouse did before. So, instead of scrolling over an enemy, there is the auto-target system. Also, the A button gets a lot of use – just about every type of action utilizes it. The A button opens doors, climbs on mounts, picks flowers, chooses attacks and a whole bunch of other tasks which if you want to do more than one of has to be prioritized. Let’s say you want to choose a certain spell when you are about to dismount, pick an herb and then go through a door… all of those are located on A so you have to choose carefully or you might find yourself with a door open to an enemy while you are picking an herb instead of preparing an attack. Little things like that come up and actually though some people might have found it frustrating I found it kinda funny because the designers really were trying to give you the most game they could fit on a disk and holding a weed while you get one hit is pretty funny.

Graphics/Audio:
Solid graphics, very rich environment with lots of detail simply for the sake of looking really nice on many occasions. Did the setting sun need to stream over your shoulder and light up the face of the npc you are talking to with a golden glow? Did the vendors in the market place need to walk from their houses, exchange pleasantries and yawn and stretch while opening their shops? They just add to the already great visual experience. The sound isn’t shabby either as sometimes it was hard to tell if the crickets were in the game or outside my window! Also, when you hear horses walking, you can actually hear the distinct sound a horse’s hooves make when you cross stone as opposed to high grass. And, you also hear animals calling to each other in the distance, sometimes alerting you to a feces-flinging baboon or just letting you know a giant ant is about to attack you from behind. Some of the best sounds and sights are just eye candy, others are potentially life-saving!

Multiplayer:
If you have friends to play the game with, the multiplayer will prove to be a blast. Different types of matches and maps are available or unlockable and are all fun to play. At the time of this review the online populations were a bit low however, resulting in some matches proving to be too wide in scale so that a level 1 may find themselves in a duel with a level 50 or a level 8 might find themselves in an adventuring group trying to complete level 38 quests. When creating the games, variables can be added to prevent too great of a gap in levels but often the higher levels will create wide open matches in hopes of getting easy low level kills or an adventurer will become so desperate to populate their game that they create a level limitless match in hopes that a high level might run them through a hard section of quests. I wouldn’t be surprised if future patches deal with some of these issues and I imagine once word gets out that this is a great game more people are likely to play it and help the online populations. 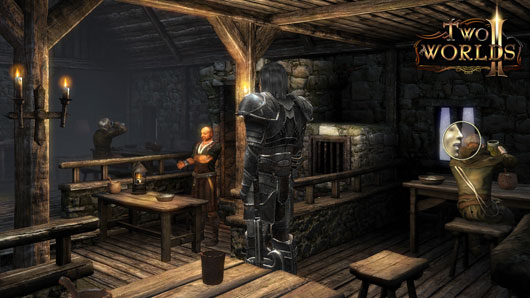 Playtime/Cost:
With tons of single player options on how to play and how to build and lots of multiplayer choices, this game has a virtually unlimited playtime, though you could still get more than your money’s worth if you just played the main quests and stayed away from multiplayer.

Last Call:
Two Worlds II is an excellent game, a very solid RPG with MMORPG potential if it catches on. The disk loading can be a little annoying but is definitely not a game-breaker. I enjoyed it very much and would recommend it to a friend so we could multiplay together. I won’t however, discuss how it stacks up against Oblivion… It would be as futile as debating domestic beers, types of computers or console versus PCs. All such discussions are based on taste and faith and so are no-winners. Play what you enjoy and this game is definitely enjoyable. 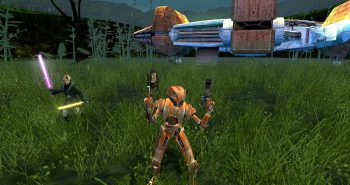 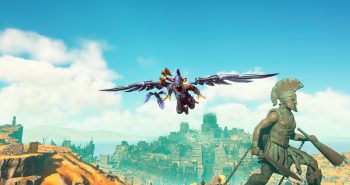 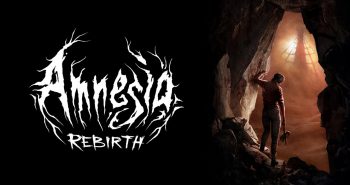