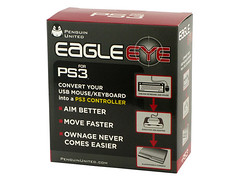 Xbox 360 gamers looking for a keyboard and mouse control system for their console have thus far been out of luck. The few systems out there are not implemented well and do not lend themselves to efficient fragging. Penguin United, creator of the Eagle Eye system for the PS3, has announced an Xbox 360 version to be release during CES in January.

The Eagle Eye for the Xbox 360 will retail for $59.99 and allow you to use your favorite USB keyboard and mouse to control your console titles.