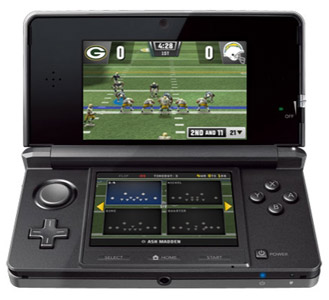 EA Sports has announced that it’s first offering for the upcoming Nintendo 3DS platform, Madden NFL Football, will be available in the first half of 2011 in time for the handheld’s launch. Madden NFL Football promises a variety of gameplay modes, such as 11 on 11 football as well as a Season Mode. The game will also include the ‘GameFlow’ play call system seen in its larger console brethren.

Checkout some new screenshots from Madden NFL Football, After the Break!