STORY
Kane and Lynch 2 takes place a few years after the original game and Lynch has set up shop in his new home of Shanghai. The seedy underboss ‘Glazer’ has tipped off Lynch to a gun smuggling deal and Kane makes his way to Shangai at the request of his dear friend. This is where things go South as they do in any violent, buddy flick and, without going into the story too much, these two guys have both seen better days to say the least.

The story in Dog Days falls flat on several different occasions in the game. The writers focused too heavily on where the game needs to go after this game is finished rather than focusing on the meat of this story. The player can find themselves lost several times throughout the plot with no real direction or read on what is happening. The filler for the story seems to be in the ‘buffering’ screens but, even with those, it is still really hard to figure out what is going on. 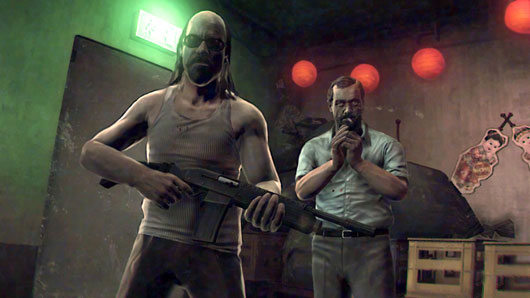 The characters in Dog Days are deep and have the potential to be standout stars for video game players everywhere. Unfortunately, the writing team behind the game does not do them justice and the ending of this game was one of the worst I have seen and really drove home the fact that IO Interactive needs a new writing team for future Kane &amp;amp; Lynch titles.

GAMEPLAY
Dog Days plays like your normal third-person shooter. The left stick operates your movement and the right stick your camera view. Unfortunately, the camera is your worst enemy as it can get stuck in places you don’t want it to be. The right trigger controls your shooting and the left is your normal zoom options. This game is pretty simple and boils down to taking cover behind objects and popping out to shoot your foes. The cover system is, at times, wonky as it glitched out several times when trying to hide behind an object. There is nothing like attempting to hide behind a barricade when instead it vaults you over into their gunfire. Additionally, one of the shoulder buttons can initiate a vomit-inducing shaky cam run. Thankfully, there were very few areas in the game where you needed to do a sprint thus it is better to stay away from it altogether.

The gameplay in Dog Days is pretty simple: Run to cover, pop up, shoot. The only problem is that the people you are going up against take about thirty bullets to kill. These Shanghai gangsters must have been shooting up some sort of super hormones because they can take some serious bullet-riddling. Of course one wrong bullet and Lynch can be killed in an instant right? Whatever drugs these guys are taking need to be passed down to our boys too. This was a very frustrating part of play as it makes some levels become quite boring as you attempt to kill the same people over an over again. 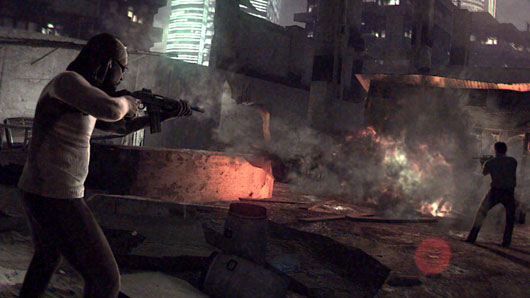 Dog Days can be described as ‘Warehouse: the game’. Every single level seemed to take place in a warehouse or stockyard. I have never been to Shanghai but, after playing this one, I can only imagine that they have a huge industrial network. It would have been nice to see some varied locations to spice things up. While the singleplayer was very short and left a lot to be desired, Dog Days has a pretty good multiplayer experience. The number of included maps is a bit low but the cops and robbers mode is aces. There is nothing like deciding to turn traitor against your mates just to take home the cash.

GRAPHICS and SOUND
The developers behind Dog Days set out to totally change the art style in the series/ Kane &amp;amp; Lynch 2 is delivered to the player as if they were watching a snuff film that as found on the ground. Loading screens are replaced with ‘buffering’ segments like a streaming movie and everything is filmed from a shaky cam point of view. While this can produce some vomit inducing moments, the take on the genre is really unique. It was refreshing to see developers taking a risk with their art style that paid off. The art direction is the best part of the game, although there is one complaint: Whoever decided to ‘pixelate out’ the ultra gory scenes in the game should have been bonked in the back of the head. When you are touting your game as a one filled with such violence and seediness there is no reason to pixel it out. You are already taking risks, so why leave that part out? It really looked poor in the presentation and doesn’t keep the player hooked to the art direction. The visual art of the world was really well done despite the lack of level locations. After playing this game i am not sure I ever want to visit that part of the world.

The sound in Dog Days was average but that could be blamed mostly on the dialogue writing. How many times did Kane and Lynch have to be surprised that they were in a sticky situation? Every single time a wave of enemies came after them the player will get a ‘Where the hell did they come from?’ type of line. This got really old after awhile and spoke to how bad the writing on the game is. The ambient sound effects were fantastic as gunshots rang out and explosions melted the screen. 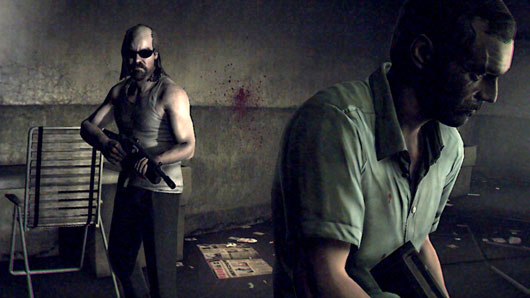 FINAL THOUGHTS
If you played the original game then it is worth buying Dog Days just to round out the story. If this is your first experience with the franchise I would hold off on running out to buy this. However, while I can’t recommend you run out and buy this game right away, Shogunites, it does deserve a rental just for the art style alone.