I can remember when I was standing in a video arcade with my friends waiting for our turn to play Hydro Thunder. Two arcade cabinets were set side by side and we each climbed into our chairs and felt the rev of the engine as we waited for a high speed race through wild maps in our choice of vehicles. It wasn’t long before the game hit home and we were playing it on consoles, with the Nintendo 64 letting four friends get in on the action at a time instead of the usual two. A plan to make a sequel was made then fell through and the game was lost, relegated to arcade collections. Now XBox Live as part of it’s ‘Summer of Arcade’ has brought Hydro Thunder back in the form of Hydro Thunder Hurricane with brand new maps, great game play and a mixture of old school boats and new ones with unlockable skins and achievements. You can even race Rubber Ducks. 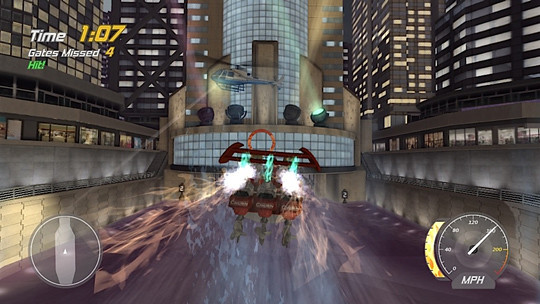 Atmosphere:
The maps are visually amazing and interactive with the racing vehicles, the sounds are crisp and the animations are so clean that it all pulls you into the game. When your boat lands after a jump, the screen gets splashed and water drips down it. The controller shakes with the rumble of the engines and stereo sound makes it so that you are sure you just heard a tropical bird squawk in the next room as you fly past lush jungles and ruins. The atmosphere pulls in people just passing by and soon they are sitting right next to the racers watching the game enthralled.

Game Play:
The game has 8 different maps with 4 styles of single player modes; Race, Ring Master, Gauntlet and Championship. Race is what you would expect from a racing game, taking on 15 opponents by drafting, rubbing and boosting your way around the tracks to beat the AI players. Ring Master pits you against pre-determined times as you race around the tracks trying to follow certain racing lines to pass through rings. Passing through rings enables you to use your boost, missing them takes it away and gives you time penalties. One of the best aspects of Ring Master is the rings take you through some of the hidden passages built into the 9 tracks. Not all of them, they still want the players to explore, but Ring Master will show you the long way around the course as well as a few shortcuts. Gauntlet is a fun mode to play and a great mode to watch. Barrels of explosives line curves and cliff jump landings, as well as just random locations players tend to hit the walls, waiting for a boat to drift into them and explode. Reflexes and nerves get challenged as players try at the last second to stop physics and keep their boats from becoming burning hulks. This mode is quick to bring jeers and cheers from spectators. Championship combines the different game modes with the different maps so that the player has to complete a certain number of game determined races and place 1st, 2nd or 3rd in overall standings against AIs. Race and Gauntlet both allow you to pick Novice, Pro, or Expert level to compete at, the game determines the skill level required for the races in Ring Master and Championship. To complete single player you have to place 1st, 2nd or 3rd in over 50 races (Championship mode has 10 overall race series that start at two tracks and work their way up) and that is where you kinda begin to really feel the lack of tracks. Once you have raced it in each mode in up to three difficulty levels you not just know the tracks well you almost feel a little burned out. Don’t get me wrong, the tracks are AMAZING but I look forward to some new maps hopefully in the not too distant future. 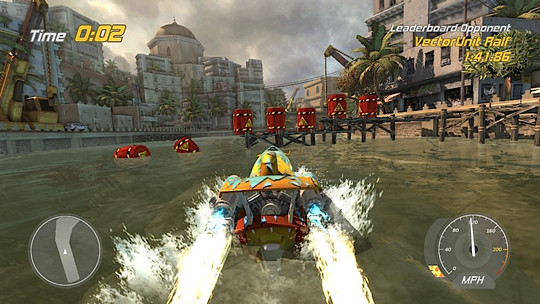 Multiplayer Play:
This was the best aspect of the old game, so it is a vital part of the new one. All maps are available but only one previous single player modes, Race. So up to four players can race locally and up to eight players can race via Xbox LIVE against each other and AI. The lack of single player options being translated to multiplayer options was a bit of a surprise because honestly I think one of the funniest modes would be Gauntlet which would let players rub each other into explosive kegs. There is a unique vehicle and player mode that helps make up for this a bit though called Rubber Ducky. In Rubber Ducky players are divided into red and blue teams and one player on each side is assigned to be the rubber ducky. Then both teams do everything they can in Race mode to help get their team’s rubber ducky across the finish line first. The rubber ducky vehicle is also available in multiplayer Race Mode. 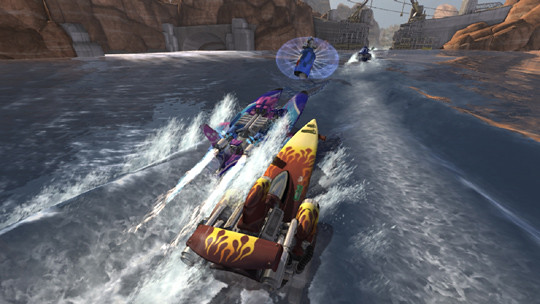 Controls:
Controls are pretty straight forward, triggers for gas and brake, A for boost, X for boost jump and the left thumb stick to steer. The ease of controller setup is nice because when you get into the Pro and Expert vehicles they can get a little squirally and the smallest adjustments mistimed with an incoming wave and you can literally find yourself steering your boat down a sidewalk. Warning: your friends and family will laugh at you for this.

Graphics/Audio:
The graphics have been greatly improved, without giving too much of the gamplay animations, there are moments where you just stare at what is happening around you with your fingers glued to the gas and boost. The sound rumbles in time to the vibrating controller and the music fits a racing game. There is a voice over in single player which seems to be your crew chief but all he says most of the time is ‘this is crazy!’ or ‘want to go back, I think there are a few walls you missed.’ I think I only heard him say one helpful thing but he adds to the fun of the game.

Playtime/Cost:
Single player will take you several hours if you have your racing game skills honed, probably a few days if you don’t. Multiplayer you can just start playing and have fun with, but with only eight maps you might want to have another game around if you plan to play the whole night with the buddies. I imagine there are new maps along the way and those would definitely kick the playtime up with friends by quite a bit. The game only costs 1200 Microsoft Points though so you definitely get your money’s worth, it is even cheaper if you buy it as part of a current game bundle.

Last Call:
They seem to put more effort into the single player aspects than the multiplayer, which is a bit of a surprise considering the multiplayer was the game’s big draw before. Still there is plenty of content for your buck, the game looks and plays great and being on XBox Live gives it room to grow. 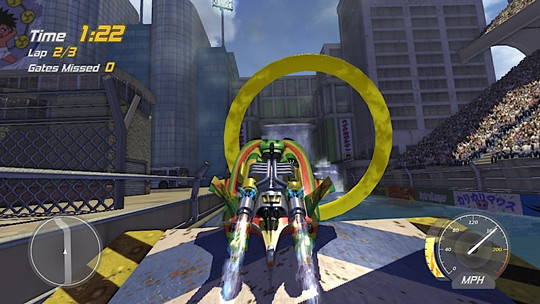 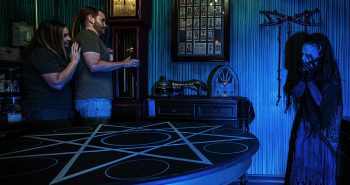 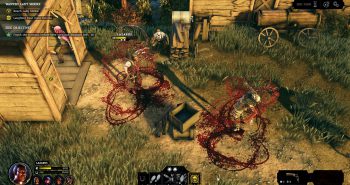