Thanks to SEGA we were able to get our hands on the Bayonetta Xbox 360 demo before it launches to the public. Bayonetta is a supernatural action game where you are a killer female going up against dark magic and even the forces of heaven. Check out our full preview after the break!
The Bayonetta demo throws you right into the action. It really gives you a ‘WTF?’ moment as you have no idea what is going on story wise. You are thrown onto this falling rock fighting what you think are angels but you are never really sure. I believe this was meant as a tutorial but it was really just mass confusion. The controls are simple button mashers that set up different combos for stronger moves. Bayonetta is equipped with super kung-fu moves and guns in her shoes. What’s really interesting is that you can do a dodge move which activates a bullet time like system resulting in some killer super moves. Nothing like a giant high heel flying across the screen to smash monsters.

After the crazy tutorial you are thrown into a little bit of a story element. To be honest I had no idea why I was this well built woman and why people in dark cloaks are coming after to me. The opening level consisted of angels coming after you in a button smashing fight. While the game looks pretty lets be honest here Shogunites. Bayonetta is really just Devil May Cry with a well built female lead. SEGA tried to mix the action with the revealing nature of Bayonetta’s outfits and I am just not sure it works. 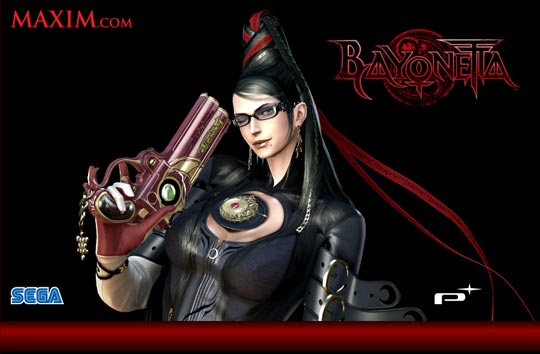 The demo levels were simple in the fact that you really just needed to lock on to targets and start mashing your attach buttons. One frustration many gamers will have is i saw no checkpoints in the demo even when going up against one of the larger boss type monsters. In classic SEGA game play if you die you get to start it all over. This is one of my major pet peeves with games these days.

When the full version of Bayonetta releases to the public it will provide a fun adventure for fans of action games such as Devil May Cry. My hope is that the story fleshes out some more and it is not such a confusing ride. If all else fails SEGA has found a new lead character that I am sure will have some legs to stay in the race with their other IP’s. The Bayonetta demo is set to launch soon and this is something that fans of the genre will want to try out and judge for themselves.

Bayonetta releases January 2010 for the Xbox 360 and Playstation 3 consoles.