CM Storm – you may know them as Cooler Master’s new gaming division. Putting out peripherals and accessories with serious attitude, we recently gave their Sentinel gaming mouse some very high marks. Being new to the gaming mouse market, we were shocked that they got things so right on their first time out. Now we get to take a look at their new Sniper Black mid-tower gaming chassis.

DESIGN &amp; FEATURES
According to the Sniper Black’s official product page, the design of the chassis was inspired by ‘military weapons’. While I am not sure about that entirely, I will say that the design reminds me more of gritty, sci-fi military weaponry than a modern-day SCAR-H or M16A4, but I digress… The point is that the Sniper Black just looks mean. Anyone who sees you with it at a LAN tournament will be impressed. In fact, the Cooler Master HAF-922 is very reminiscent of the Sniper Black in style, and they both looks like they could be related to the same bad-ass gaming case progenitor. 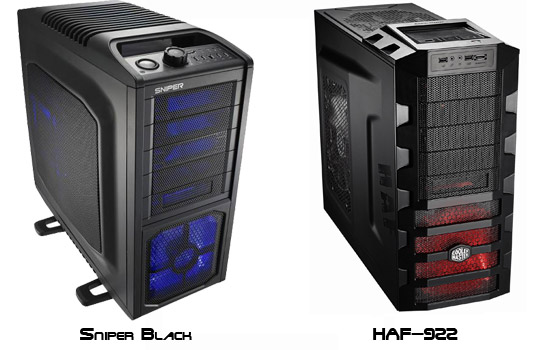 Being a sizeable mid-tower, the Sniper Black’s dimensions measure out to 22.3”(d) x 10”(w) x 21.7”(h). Furthermore, the Sniper Black weighs in at 23.42 lbs stock. This is mainly due to the unit’s steel skeleton. Now, not all of the Sniper Black is steel – some of it is a tough ABS plastic and some cheaper-quality metals for the ‘mesh’ areas of the case, which run down the bezel and a good portion of the side-panel.

Where most gaming chassis will have one or two 200mm case fans, CM Storm has chosen to include three of them here. That’s some serious air-flow, and coupled with a 140mm rear exhaust fan and clever vertical heat-dissipating design, it will ensure that your components stay cool. This ‘vertical’ system ensures that the fans which draw air into the case are located on the side and lower half of the case whereas the exhaust fans are placed on the upper half and rear. This takes advantage of a dominant feature of heat, in that it likes to rise naturally. Some cases like to draw air in from the top – fighting heat’s natural tendencies. If you need even more air-flow, there is room for an additional 140mm fan at the very bottom of the chassis.

The three 200mm fans are all tied to the Sniper Black’s control center which can be found on the upper-front of the chassis. On this control center you will find not only the power and rest buttons but also a rotary fan-control speed knob and an LED control (the 200mm fans all have blue LEDs on them to illuminate the chassis). Other nice features of this control center include a microphone, headphone, and eSATA inputs as well as four USB ports and a FireWire port to boot. It’s one of the most full-featured control centers I have seen on a gaming chassis.

INTERNAL DRIVES
Utilizing the 5.25” drive bay locking system found on the Cooler Master HAF series, the Sniper Black can be equipped with up to five 5.25” drives and five 3.5” drives. Installing and removing these drives could not be easier thanks to the previously-mentioned locking system which requires no screws to keep things in place. 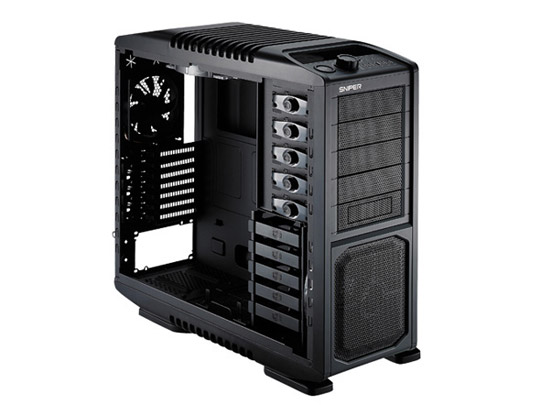 COMPONENT INSTALLATION
Installing components into the Sniper Black chassis is really straight forward. Some of you may be a little put off by the drive locking mechanisms or the bottom-mounting PSU, but give yourself a little bit of time and you should be fine. CM Storm has really put a lot of thought into just how much physical room is necessary to install modern components and it shows. Even our GTX 280 fit inside with no issues. Also, cable management in the Sniper Black is much easier to pull off thanks to the raised motherboard tray. Behind it, you will find about a half inch of breathing room with which to braid your cables about. It is also worth noting that the Sniper Black features a totally screw-less install. This means that you need no tools to put your components in the chassis other than your hands.

Those of you who buy this case will undoubtedly be using a non-stock CPU cooler, perhaps even an all-in-one, liquid-cooled solution. There is roughly 7-inches of clearance between the CPU and mesh side-panel, more than enough for most aftermarket coolers, including the Thermaltake SpinQ and Cooler Master V10 models! Even better is the fact that the motherboard tray has a large square notched-out for bottom-access to the CPU cooler pegs. This means that you will be able to install the cooler without having to fully-remove the motherboard from the tray. 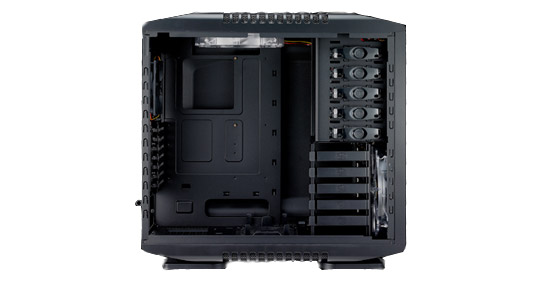 CONCLUSION
The CM Storm Sniper Black gaming chassis retails for roughly $160 dollars right now from online retailers such as Newegg. While this may be pricey for some, if you are looking for an exceptional mid-tower gaming chassis with some of the best air-flow around, you would be hard-pressed to find a better solution. Couple this with the Sniper Black’s user-friendly features and picking this one up is simply a no-brainer.