Have you ever felt like loading up in a space pod and dropping down upon your enemies below to rain down some serious pain on their space faces? We got to do just that as Timegate Studios and SouthPeak Interactive gave us a hands-on preview of it’s upcoming FPS frag fest Section 8. check out our first impressions of the PC version after the break!
Section 8 is a futuristic FPS multiplayer shooter where you have the choice of playing one of two warring factions. The 8th Armored Infantry is in constant battle against the Arm of Orion for control of several alien worlds. This is a return to squad based online action and I was chomping at the bit to load in and get to playing.

I started out by going through the option menus and configuring my load outs for the particular class I wanted to play. A big draw with Section 8 is the ability to change your load outs to whatever you want. This is a unique feature for FPS shooters as it gives the player a way to tailor the class he wants to play however he wishes. 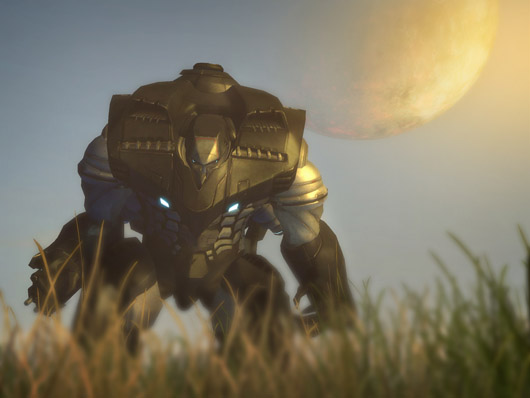 After configuring my load out I picked a server from the easy to use server list and hopped right into the class selection. As I already configured my load outs I knew that I was going to be playing as a recon. Recon is the Section 8 version of the sniper class but the other usual classes are there. You have your heavy gunner, engineer, and several types of assault characters. After selecting my class it was off to pick a spawn point.

One of the other touted features of Section 8 is that there are no spawn points. You can drop in via space pod to any point on the map you wish. Now before you think about dropping in behind enemy lines you might want to worry about what is waiting for you. I made the fun mistake of dropping in and my space pod being blown to bits by anti-air guns. This really made you think of a strategy with the class you are playing. 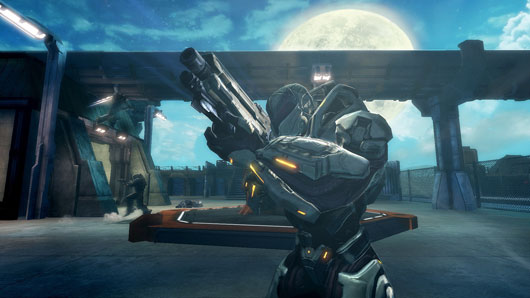 Being a recon class I thought it best to drop in on what I thought was a mountain or hill next to a enemy base. As the rest of my time went about capturing control points I wanted to use my sniper advantage to pick off some defenders and maybe blow up some AA cannons. I landed safely and tucked myself into a nice groove in the rocks where I had a clear shot. A enemy defender walked right into my sites and I hit a clear head shot. Only that enemy did not die and instead launched a rocket that blew me to kingdom come. This is where I found out that in Section 8 there is no thing as a one shot one kill. This is a disappointment to me as a player because if you are a sniper you want to be that force that can turn the tides in a game. I understand the point of this stops the camping system but the recon seemed really underpowered to me. It took 8 shots to kill one single target so hopefully this is something they can look at once the game launches.

I had the chance to give the other classes a shot and they were just like you would expect them to be in a FPS shooter. The cool factor comes in the mech and vehicle combat. There are mech’s to command, tanks to drive, and airships to blow things up from above. Feeling like bringing some friends along? You can do just that as some of the vehicles offer spots for fellow teammates. The vehicle combat really added a a bit of fun to the normal situations you would find in an online shooter. 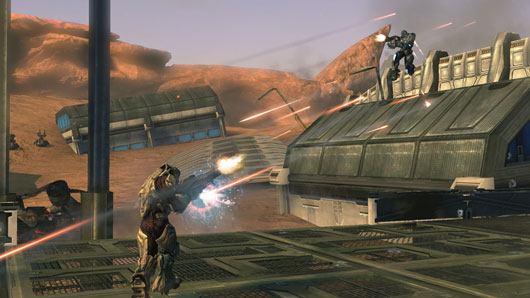 The last thing i got to play with was the level status of your player. As you capture spawn points or rack up kills you gain experience and levels. With each skill up you gain the ability to command on demand drops from your forces. With a simple click of a key you can pick from supply depots, AA guns, radar, and several other items. Like a RTS you place these where you want on the map and they construct before your eyes. I personally haven’t seen this in a FPS before and it was a pretty cool feature. A cool feature until an enemy airship flies in and blows up what you just built leaving you on your knees screaming ‘why god why?!’

Section 8 has the potential of a fun pick up and play FPS shooter. While we were only able to test the PC version the Xbox 360 version will be the same game. Hopefully the developers will find a way where 360 owners can play with PC gamers however at the time of this article there was no news on that front. As the game just entered open beta the community feedback will be very valuable to the developers in fine tuning the game. Section 8 is set to be released on September 1st for both systems and you can jump on in to the open beta at the Section 8 website here.