Walking over to the Electronic Arts Gaming Lounge across the street from the San Diego Convention Center on Saturday, foremost on my mind was getting some first-hand time with BioWare’s Dragon Age: Origins. Having been a fan not only of BioWare’s Baldur’s Gate series but also their later works, I have been watching this one develop very carefully.

Settling down inside the DA:O area of the lounge (which, by the way, was a brilliant retreat from the show floor booth), game producer Fernando Melo hooked me up with my own kiosk running the PC version of the title.

The first thing Melo and I spoke about was the main character’s ‘origin story’ campaign, which occurs after character creation is complete. This origin story campaign basically sets up your character’s point of view on the world as well as some initial events which happen in the characters’ life. Most amazing to me was that this origin story, according to Melo, will take approximately two hours to complete!

Melo also told me about… (cont.)
(cont.) …the game’s social system, with regards to how you are treated by others in the world, which seems very complex. The main example he elaborated on was when the player chooses the race of Dalish Elves for the main character. In the land of Ferelden, the Humans have a very racist attitude towards them and this racist attitude can cause many to simply NOT speak with you. This, in fact, closes off some of the game’s quests and storylines for good. Of course this can change for some when your Dalish Elf becomes a Grey Warden. Being that you are a Dalish Elf you are reviled but for being a Grey Warden you are respected – humans are so easily conflicted…

For my demo, I chose to play a male Dwarf Noble (the second-born son of the Dwarven King, actually) and proceeded to customize my character’s physical features. The character customization system allows for a plethora of phenotypic variations for every character you create. You can even select the type of voice your character should have, something PC gamers might remember from the old Baldur’s Gate days. Clicking through that, DA:O brought me to the start of my character’s origin story.

Finally achieving his first military command and asked to attend a party in celebration, I decided to first stop by the proving grounds to get some feel for the game’s combat system. Growing up a hardcore PC gamer, I was very use to the control system seen in the Baldur’s Gate series. My concern was that, even though BioWare developed DA:O for the PC first, due to its console versions it would be ‘dumbed down’ or made more ‘x-treme’ (or other corporate adjective they think draws in the younglings). Thankfully I did not find this to be the case at all. Sure, BioWare decided to speed the combat up a bit to accommodate not only different weapon styles but also garner more mainstream attention, however it still has the option to be a tactical game. You can hit the space bar at any point during combat, pausing what is going on and allowing you to assign commands to all your characters that will be carried out as soon as you un-pause the game. 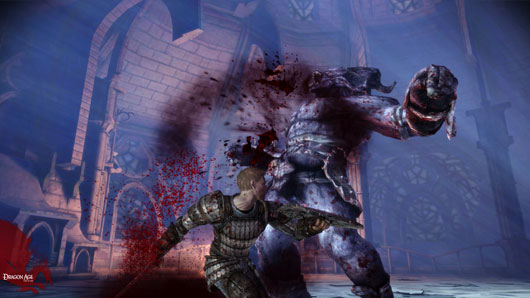 In the proving grounds, it was just my character facing off against a series of opponents, each more difficult than the last. Controlling my character in the 1v1 matches was entirely simple and any modern MMORPG-gamer should be able to pick it up without problem. You select your character and then right-click on the enemy you want them to attack. Each character has an array of skills they can utilize on a quick-bar at the bottom of the screen. Once selected, the character uses the skill and then it takes a certain amount of time to recharge to be used again.

My character started with a very cool shield bash ability that executed smoothly and without glitch every time I used it. BioWare has really made it so that the animation doesn’t miss a step in going from a basic attack to a special one. Seeing my stout Dwarf reel back with his shield and drive it into his opponent really looked like it had a lot of force behind it. My helpless foe would fly back and smash into the ground from the force of the attack. This shield bash leaves enemies stunned on the ground for a short time, giving you the ability to hit them once again when they are down. It is a great way to interrupt an opponent in mid swing. Combat is brutal and full of blood spraying-action. In fact, I even saw that my character had some of the spray on him after a sufficiently-bloody swipe. 1v1 was visceral and I can’t wait to see the carnage which will ensure in a full party battle.

Melo and I also spoke of the difficulties in developing DA:O on the console platforms after it was primarily developed for the PC. Due to the virtually-limitless hardware capabilities of the personal computer, graphics can be scaled up quite a bit unlike the consoles which have a static hardware configuration. This meant the team would have to tune down extraneous graphic elements in order to achieve stable frame rates. Melo said that gamers should not worry though as every effort was made to only tune down things that were in the backgrounds such as extra grass and fauna so that major visual elements such as characters were left, more or less, unaffected.

Apparently work on the PC version of the game is all but complete and the primary job now is finishing up the Xbox 360 and Playstation 3 versions. Also mentioned was that there was a huge number of celebrity voice overs in the game, but Melo proved to be a tough customer and just would not crack under the barrage of my inquiry on the matter. Next time, Melo, next time!

One full playthrough of the game should yield the gamer up to 100 hours of gametime and, even then, you will not see everything the first time through. Like Bethsoft’s Fallout 3, replayability is being built-in on a design level.

From my time with the PC version of Dragon Age: Origins at this year’s San Diego Comic Con, I can safely say that I will definitely be purchasing it on release day. The game should prove very entertaining for both older gamers and younger ones alike. BioWare is not skimping with the story department with Dragon Age: Origins and players will find themselves steeped in a very rich and detailed world.

*I would also like to thank Fernando Melo, Mike Laidlaw, Chris Priestly, and Jay Watamaniuk of BioWare for helping make this preview possible. 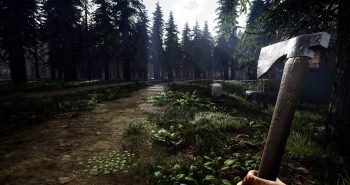