GamingShogun met with Bethesda on the first day of E3 2009 to preview their upcoming water-wasteland title: Brink. Brink is being developed by Splash Damage (makers of Return to Castle Wolfenstein).

Set about 40 years in the future, global warming has caused the oceans to rise, flooding most of the surface. The last refuge for humanity is the Ark, a floating city which originally built and designed as a social engineering project… (Cont.) Movement within the world of Brink has a new feature.  In addition to the standard controls, Brink introduces S.M.A.R.T. movement.  S.M.A.R.T. stands for Smooth Movement Around Random Terrain.  Simply point your character in the direction you want to go, hold the S.M.A.R.T. button, and your character will take the ‘smartest’ route towards that point.  Sometimes this means walking around obstacles, sometimes it means jumping a ledge, grabbing a bar, and swinging up a level.  Without a hands-on demo, it’s hard to tell whether this feature will be a novelty, or will dominate how you move through the game. When engaged it is very reminiscent of Mirror’s Edge movement system (only automatic). There are two main playable factions in Brink:  refugees, and the security forces attempting to maintain order for the social elite living on The Ark.  Characters are highly customizable, allowing each player to make a truly unique avatar.  One truly unique feature is the ability for gamers to take their single-player mission character and continue their campaign in multiplayer mode.  Need help on a mission?  Call a friend! The preview highlighted a mission to Container City (picture a shanty town made of lego stacked cargo containers).  The developers showed us how selecting different objectives mid-mission can help guide your team through the action.  If an engineer is needed, but there are no engineer NPCs in the mission, the player can change classes on the fly to fill whatever role is needed. 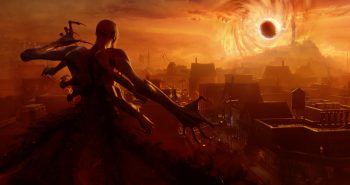