When looking at the Novint Falcon, the first thing I thought of was some sort of new computer-aided design peripheral. Little did I know that Novint Falcon was specifically-designed to be used with virtual game environments (those pesky ‘video games’ as the kids say). So it was with great, geeky enjoyment that I hurriedly un-boxed the Novint Falcon as it sat on my desk. Pulling out the pod-like peripheral, I could not help but think about the artificial life-forms known as ‘Exocomps’ from Star Trek: The Next Generation.

Our Novint Falcon’s main pod is white with silver accents (there is also a black-accented offering) and it sits on two bowed, silver legs. The Falcon actually has a wider overall footprint than I had expected but, at 9”x9”x9”, it still fits in the space usually taken up by my mouse pad. Installing and setting up the unit is straight forward. Simply install the drivers via included CD and then plug the Novint Falcon into the included AC adapter. After, plug in the USB cable and you are all set.

While the included mini-games do a fine job of introducing the user to the full Falcon experience, we were more interested in how the peripheral works while doing some hardcore gaming. So we downloaded the demos for the HaptX ( Reachin’s SDK Engine) enabled Penumbra: Requiem, Penumbra: Black Plague, as well as the HaptX mod for Crysis. Having been a fan of Frictional Games’ Penumbra series, I figured it would be a good place to start.

For those of you who do not know, the Penumbra titles are really Portal-style puzzlers wrapped up in a survival-horror skin. The dank and dark atmosphere of Penumbra: Requiem’s opening room washed over me. It is some kind of cell and you awaken there with no idea where you have been taken or who brought you there. This is creepy enough without the Falcon, but I was about to find a whole new level of immersion awaited me. Walking over to the table, there are several drawers which can be explored. So I moved the Falcon’s control orb inwards and to the right. That’s right, ‘inwards’. The Falcon is capable of the movement in three dimensions at the same time which allows for inwards and outwards motion. So as I move the Falcon control orb inwards and to the right, hoping to match up the reticule on the screen with the door I am met with a sudden and jarring stop. I did not control the reticule correctly and, instead of gracefully moving to the drawer, I collided with the table. I was completely impressed with the force the motors inside the Falcon are able to produce. I could not budge the thing with any normal amount of force. Sure, I could have really tweaked on it, but that would have undoubtedly broke the Falcon which is not your intended goal. I pulled the orb out a little bit to retry my approach at the drawer. Upon successfully mating reticule to handle, I depressed the grab button on the orb and pulled outwards, opening the drawer. The experience which the Falcon provides in puzzle titles is comparable, albeit with realistic forces and control limiters, to the experience of using the Nintendo Wii’s wireless Wiimote in a game like, say, Elebits. For 3d puzzle titles, the Falcon is a huge leap forward in PC peripherals and we were soon blown away with the other Penumbra demo we downloaded as well. 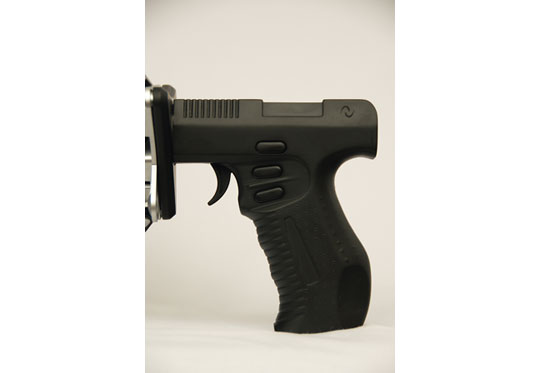 Puzzle games are all well and good but sometimes a gamer needs to do a little bit of ‘wet work’ and fire off some rounds from his or her battle rifle at enemy troops, am I right? So we switched over to the HaptX enabled mod for Crytek’s visually-breathtaking Crysis. Crysis places you in the role of a special operative working within a team of soldiers selected to employ a new power-suit in the field. The field, in this case, being an island near the Philippines. Again, the Falcon blew me away with its delivery of in-game forces to my hand. Driving around in vehicles actually provides you with acceleration and inertial forces while switching suit modes to the ‘armor’ setting will lessen the amount of knock-about force you feel when getting shot, which hopefully doesn’t happen for you as much as it does me… But I digress.

The standard orb-grip does a fine job of allowing the player to navigate 3d space, but for a shooter title we felt that we needed to step up our game and, thankfully, Novint was way ahead of us. Enter the Novint Falcon Pistol Grip. For a very reasonable $19.99, you can swap out the standard orb grip with the handle and trigger of a semi-automatic pistol. This allows for a much more realistic control of in-game weaponry and even makes recoil effects feel that much more authentic. The beauty of this switchable grip system is that any number of grips could be created for the unit for all manner of applications and we are excited to see what they will come up with next.

Gamers should be warned about taking the Novint Falcon into a death match tournament environment unless other players in the game were using the peripheral as well. Due to some of the movement restrictions presents in navigating 3d worlds as well as force feedback effects, this can actually make you slower to respond than other gamers who don’t have to contend with them at all. For heightened single player and co-op multiplayer experiences however, the Novint Falcon just brings it to a whole new level. Just be ready to relearn how to ‘play’ your favorite games while you get used to the peripheral. There are different muscles used in controlling the Falcon than your standard mouse and you will need a bit of time to adjust.

On the whole, the Falcon may seem expensive during this troubled economic time at $190 dollars. However, hardcore gamers looking for the best gaming experience possible would be remiss to pass up on the chance to use the Novint Falcon, especially with the pistol grip! It has added a whole new dimension of immersion into some of my favorite titles and looks to be adding support for more at a rapid rate. The beta version of a HaptX-enabled Left 4 Dead was absolutely incredible, with the controller even getting all sluggish when splashed by a ‘boomer’. There is also a good message board community on Novint’s official site to help with technical issues and the developers seem to patrol it frequently, taking consumer questions and opinions when not finding out where the demand for the next HaptX-enabled titled lies. If you can afford it, the Novint Falcon is not to be missed!