At a hotel across the street from the San Diego Comic Con convention going on last weekend, we got a chance to checkout Cheyenne Mountain’s Stargate Worlds and even play it for a bit!

The first thing we saw was a video showing off various landscapes in the game. Stargate Command looks amazing, and we were told that they have fleshed the base out quite a bit more than what was seen on the show. It will be interesting to explore the locations we remember from the show as well as all the new nooks and crannies in Cheyenne Mountain. 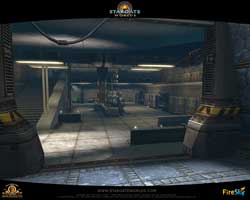 Then it was a bit of Q&amp;amp;A with the dev team showing us the game. We learned that human characters will still loot mobs in the field and equip any items they wish. Items that are not wanted can be sold, traded, or broken down into their constituent components for crafting later on. Also, new items can be researched and, if you are good enough, you will gain new item blueprints to build from later on. The weapons are being custom designed by Cheyenne Mountain, based off of real-world weaponry but the P-90 will definitely be making an appearance (much to the delight of fans everywhere).

The dev then played a bit of the game, showing us the ropes and, most importantly, the cover system they have devised. Combat is handled with old-school ‘internal dice rolls’ ala EverQuest. Players will, of course, have special attacks and abilities (with cool-down timers)to use as well. This cover system is what will really separate the combat in Stargate Worlds from other MMOs, however. 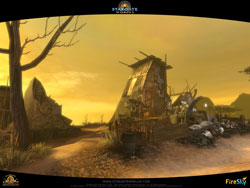 Players have a circular indicator on their screen which will tell them from what arcs they are covered by surrounding objects, etc. Enemies will also appear as blips on this display. If they are inside one of your covered arcs, you will receive a defensive bonus. If they are outside of it, then you better move your butt to some better cover! When you target an enemy you will see their cover arcs as well. If you maneuver outside of their cover, you will gain an attack bonus against them.

The enemy AI is based off of different sets of behaviors, which not only allow the mobs to react based on their own needs to find and exploit cover, but also what is happening to other mobs around them. According to developers, an AI opponent might decide to change tactics in mid-combat if, say, their stronger friends get taken out. The enemy AI could decide to go into a totally defensive mode against the players. Then again, if they are the only one left, they might decide to charge you (not a good plan).

Also, players can run and shoot at the same time (albeit with a to-hit penalty) which makes combat a cool mix of old-school MMO and contemporary actioner as players move from cover to cover as necessary to gain a tactical advantage over the enemy. Teamwork will be crucial, as having multiple team members at multiple angles of fire is one of the greatest ways to overcome an enemy. 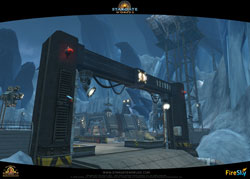 This feature will, hopefully, keep the Leeroy Jenkins’ charges to a minimum as without thinking through your tactics your goose is surely cooked.

Vehicular combat is missing from the base game, as the developers said they wanted to get the ground-game as the primary focus of Stargate Worlds. Although, it seemed fairly obvious that vehicular combat would be in serious consideration as an expansion at a later date should things go well for the game in this helter-skelter world of MMOs.

We also learned about the Archaeologist and Scientist character classes (available only to humans). The devs want to make these extremely necessary in the grand scheme of the game, as in many MMO’s the specialty classes end up being an after thought. These two classes are vital for not only researching and creating new weapons, etc, but also in completing special ‘mini-games’ encountered on missions. These mini-games are how players hack into doors and other technologies. Early on, anyone will be able to do them. However, at later levels they will be virtually impossible for anyone else to do other than the non-combat oriented classes, which get special abilities and tools that allow them to complete these tasks. 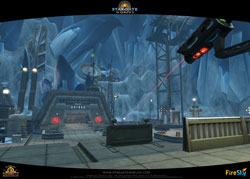 The mini-games are all done on a Flash layer (though processing is still server-side so don’t get any funny ideas).

Then it was our turn to take the reigns. Unfortunately, the hotel’s network connection was being flooded at the time so we dealt with some lag here and there, but the cover system kept the action moving nicely. It was a pleasant mix of taking cover then running to new cover when needed and helped capture the gun-battles of the show, in which the small SG teams take on outnumbering foes by the use of tactics instead of raw force. And in the Lucia Flats where we were engaged at, there was plenty of rubble to use. Those pesky Lucian Alliance guys…

We were impressed by Stargate Worlds and can’t wait to get a chance to go through the gate again.