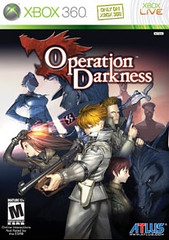 The demo for Operation Darkness, a WWII TBS game developed by Atlus U.S.A. Inc, has been release on Xbox LIVE for your playing pleasure. The game blends the fantasy genre with the modern strategy game by integrating the use of magicks and the existance of werewolves. What, you mean werewolves aren’t real!?!

You can find the official Operation Darkness website here.

Official Release:
Atlus U.S.A., Inc. today announced the launch of the official Operation Darkness demo on Xbox LIVE Marketplace. This epic fantasy WWII turn-based strategy game demo features one mission, offering a variety of attack options and access to some of the more unique spells in the game (werewolves, anyone?).

Operation Darkness is currently scheduled for release on June 24 for the Xbox 360&#174; video game and entertainment system from Microsoft.