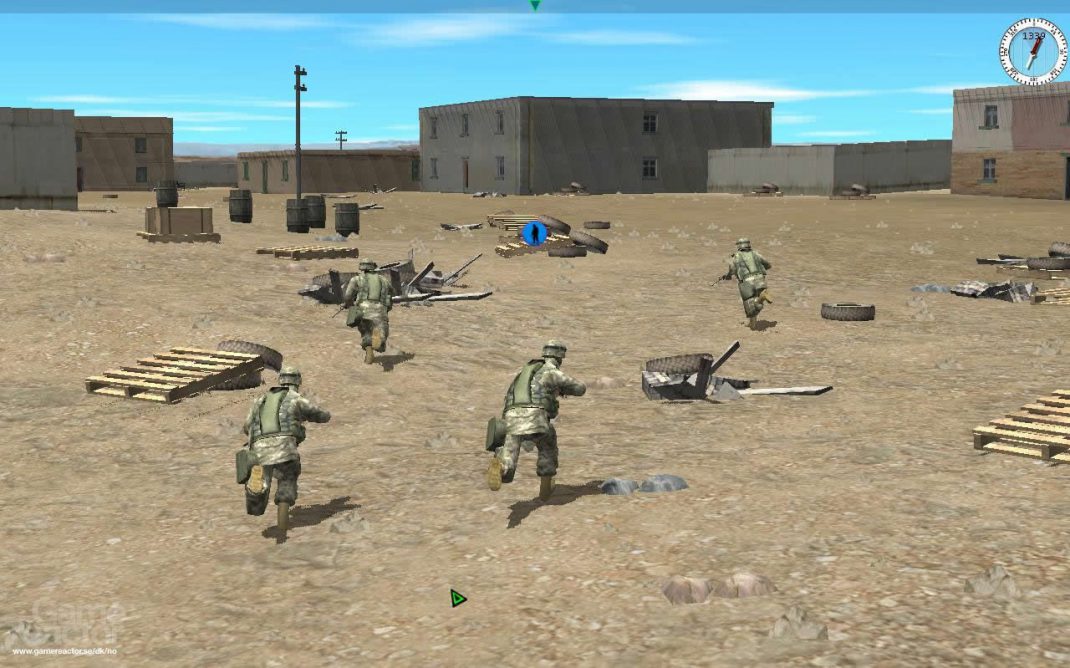 About the Game
Combat Mission Shock Force (CMSF) is a real-time or turn-based strategy game set in the modern world. This is in opposition to the rest of the Combat Mission series which have been set during World War II. CMSF features a single-player campaign which chronicles an invasion of Syria by the United States as well as a Quick Battle generator and Scenario Editor. It also features several multiplayer options including play-by-email.

Gameplay
Combat in CMSF depends a bit on what gameplay mode you choose to play in (real-time or turn-based). In real-time play, it runs alot like any other RTS. However, with CMSF, you can pause the game and give orders for your units to carry out when play resumes. This is an exceptional ability as strategy is the single most important element in successfully playing CMSF. While in turn-based mode (which uses the ‘WeGo’ system found in other CM games), the game runs in phases. Players will first issue orders to their troops and then set the action phase in motion. In that phase, which lasts one real-world minute, orders can no longer be sent and you get to watch the consequences of your choices unfurl, good or bad.

There are a multitude of orders to give units, and are split into four categories: Movement, Combat, Special, and Administrative. Different movement orders trade speed for vigilance, for instance, there are even orders for a unit to cover a specific firing arc – useful when running vehicles together in formation. Infantry can go into buildings (any of the various floors including the roof) for shooting position and cover, and can even tire out from running too far of a distance. All commands are stackable to help make sure your unit’s next action is not its last. In addition, morale plays a huge part in determining your troops’ willingness to follow your orders and their success in battle.

Players can command many types of units, from M1A2 battle tanks, to ‘unconventional’ forces. The armament of each unit was taken from military spec and it shows. The previously mentioned unconventional units come in many shapes from ‘Technicals’ to foot soldiers which can plant IEDs across the battlefield.

Replayability
CMSF offers the single-player campaign, a host of single missions, and a quick-battle generator which randomly creates a mission on-the-fly, based on your selected options. This greatly extends the life of this title, as every encounter is different.

AI
Enemy AI is fairly good once higher difficulties are selected. In the lowest settings, we found that enemy units will tend to sit in one spot during quick-battle missions. In fact, the higher difficulty settings can be too much sometimes. In one quick-battle, I was running my forces through a city attempting to engage the enemy at the far end (or so I thought). Much to my surprise, they had taken up residence in a building alongside one of the roads which one of my Strykers was traveling up. They proceeded to effectively ambush the Stryker, destroying it with an RPG. The ensuing chaos of locating available assets, diverting them to assist, and at some point attempting to storm the building was extremely eerie given today’s urban combat environment.

Graphics
CMSF features very functional graphics. They are sometimes very pretty, but almost always have that ‘military simulator’ look to them. The saving grace of the graphics in the game are the units, which are modeled, amazingly, to the smallest detail. Unit animations are pleasantly fluid as well. However, the graphics go to the ‘plain’ side quickly when looking at the environment. The far-off background seems parallaxed but it is of a lower resolution and appears slightly distorted. The street objects such as buildings, light poles, etc are all of low-polygon count but with the detail work on the units, you really don’t notice. The camera is nicely controllable, and can get to virtually any angle a commander could need to get battlefield awareness. Tracer fire runs rampant in CMSF, and when a battle starts heating up, the rounds fly and ricochet all over the place. It can truly be a spectacular gaming sight.

Initially, we were having some difficulties getting solid frame rates out of the title and out test rig is running an 8800gtx in Windows XP Pro 32-bit. As it turns out, there is an optimization in the Nvidia graphics card that was causing a whole host of troubles called ‘threaded optimizations’. After being disabled, the frame rate improved considerably. We expect it to get even better given Battlefront’s track record of long-term product support and patching.

Sound
Sound design in CMSF is very realistic, and all the vehicle/weapon noises were recorded from their real-world counterparts. Sound is positional, allowing you to go from faint weapons fire when hovering on high, looking down at the battle, to the bone rattling roar of vehicles moving about and even idle infantry chatter from a soldier’s eye-level.

Music
The score for CMSF is of the standard action-fare, with hard drumming military marches, electric guitar madness, and even the occasional sitar.

Multiplayer
Multiplayer can be done several ways in CMSF. The first way is to play over IP or LAN. The game can also be played on a single PC in a ‘hotseat’ mode or even a play-by-email option. Not many games allow play-by-email these days and it is a welcome addition for when friends cant play together at the same time.

Conclusion:
After spending quite some time with Combat Mission Shock Force, I have to say it is one of the most fun battle simulations I have ever played. It has the eerie realism of an embedded journalist’s footage coupled with the fun of a puzzle game. As previously stated, strategy is everything in this game. The game has a moderate learning curve but, once gotten the hang of, it is very rewarding.