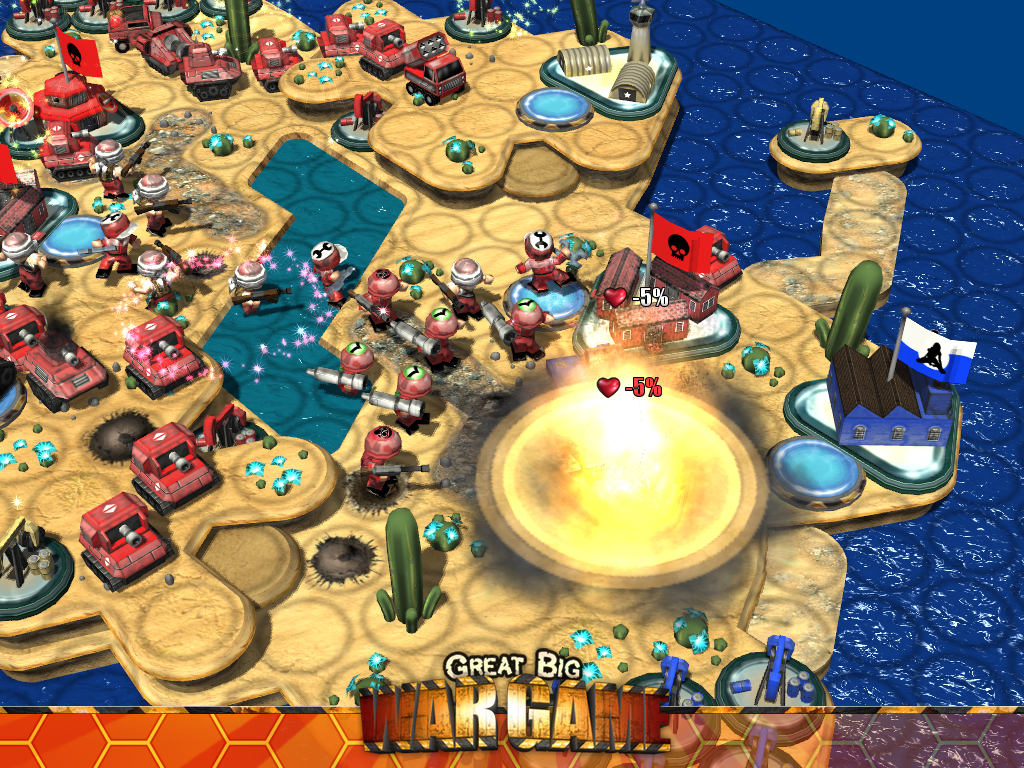 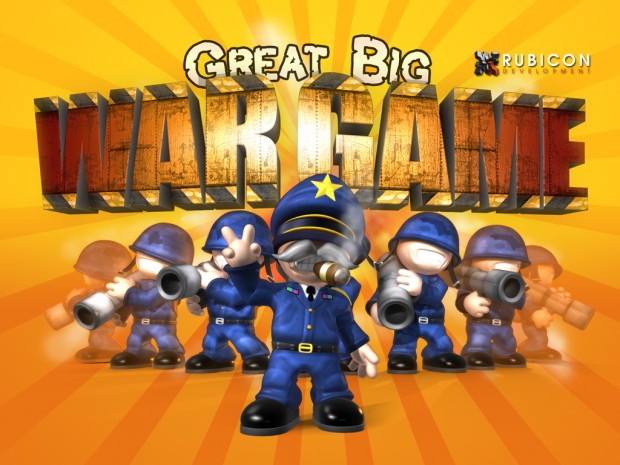 I saw the preview for this game and was immediately psyched and skeptical at the same time.  The game looked just a little too good to be true for an iPhone game and I figured the trailer had to be cutscenes.  Great Little War Game was good and a legend in the gaming community, the graphics could be a little better but I figured that just had to be the sacrifice to make the game work on the platform.  Then Great Big War Game came along and lived up to the legacy of the series and plays even better than the trailer.  Wait, did I mention it is $3? 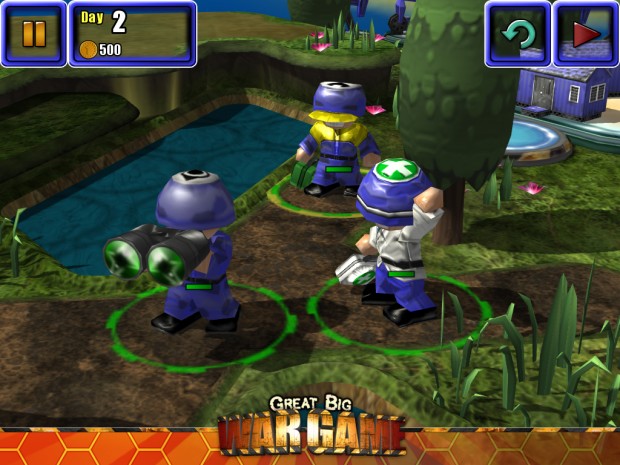 Graphics are hugely key to this game and are one of the reasons I not only find this a fun game but a family one as well.  Simply the graphics remind me a lot of the Worms franchise though in a 3D environment instead of Worms mostly 2D side view.  You can turn on blood settings but it doesn’t make it much worse and the silliness of the graphics isn’t lost then.  Audio was fun music, silly sounds and funny comments fill the playtime.  It is its own game, with its own gameplay but visually it feels very similar to the fun of Worms which is a very good thing.  Worms is one of the most family friendly video franchises of all time and if it keeps it up the Great War Games franchise will get the same notoriety.  The graphics and audio are both exceptionally clean, no pixel issues that distract from gameplay, this is one of the cleanest graphic games ever seen on an iPod and that is a big boast. 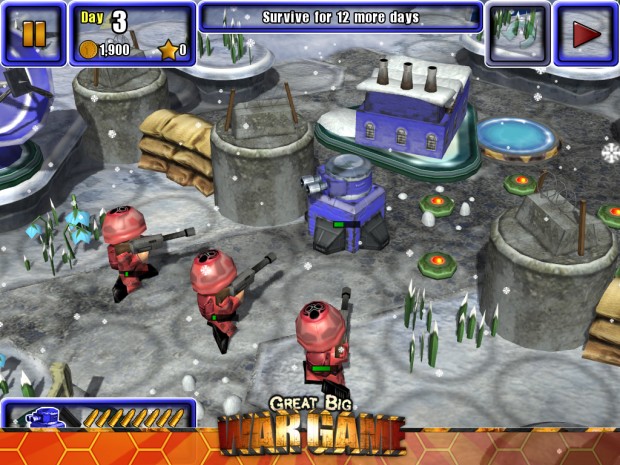 So we know it looks like the fun silliness of Worms but don’t let that trick you into believing that this is a simple game aimed at a very young audience.  This game has all the strategy of the Jagged Alliance and Command and Conquer games.  It is a hexagonal turn base game like JA but it has the Command and Conquer play style when it comes to use of resources and vehicle usage and allocation.  It took the best elements from both those games and mixed them together in a very intelligent manner.  The AI is very smart, the 50 campaign maps all have their own challenges and surviving, or not, depends on every troop movement.  Luckily whenever it is your turn you can save at any point during it, so saving at the beginning and ending of each turn is highly recommended in case you make a move you later regret.  There is a skill tree involved which you may change your mind on where to put your points as well. 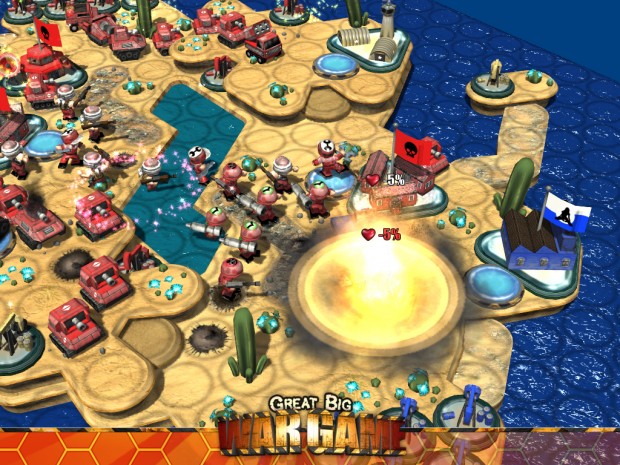 There are also plenty of save slots to keep you from running out and enable you to save a couple turns.  It is all touch based so the controls have been made easier than either JA or C&C but every move requires thinking three ahead.  All this on a silly fun looking game?  Yes please!  Single players can choose campaign mode where you go through 50 missions or you can pick a skirmish for a quicker game, though either way you can save on your round at anytime and go back to the game whenever you want for a few minutes or a few hours.  As a result Great Big War Game has all the challenge of a PC strategy game in a small program on a small system.  It even has Fog Of War so that all you see is clouds and hear an occasional vroom if you don’t have eyes on that part of the map. 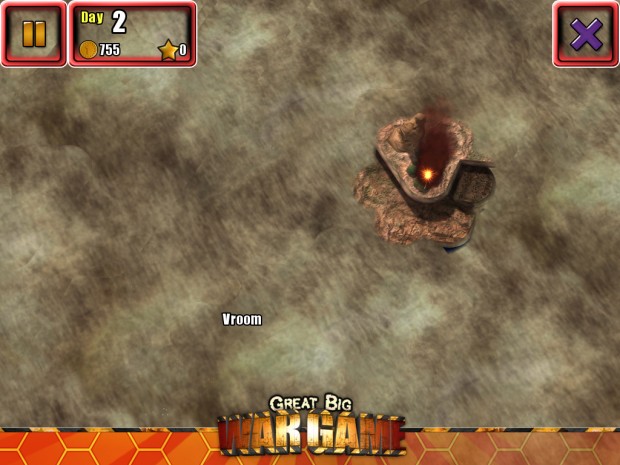 Multiplayer has even more maps and makes the absolute best use of the turn base play that it possibly could.  This is where it has borrowed from the Words with Friends in the sense that you make your moves, end your turn, then wait for you opponent to make theirs.  So a game could take hours or days depending on how active the players are and how well they think ahead, you just wait for your turn, see what the enemy did, respond to it and make your moves then end your turn and see when you get your next move.  The mass number of maps available makes it so that you don’t have to worry so much about someone memorizing moves and strategies for all the maps and you don’t have to worry about burning out on it too fast.  As a result the game stays very fresh since with so many maps and so many opponents available it shouldn’t ever be the same game twice! 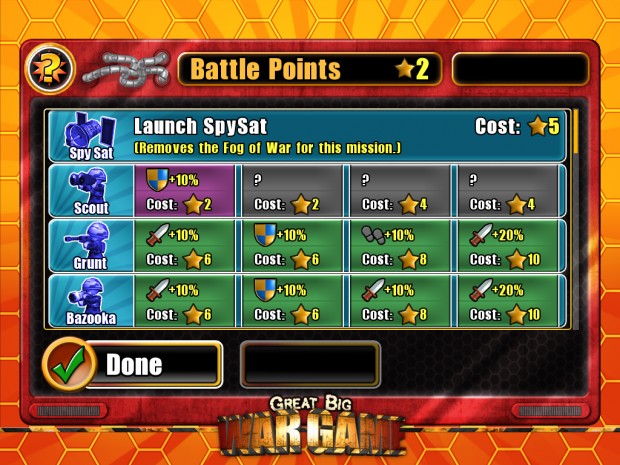 It was tempting to lump this feature under multiplayer but I have learned painfully recently that multiplayer doesn’t necessarily mean local co-op.  When you are playing on a little phone you can’t exactly both be holding it and playing it at the same time so maximizing the feature of turn play this game has a pass and play feature so that you and a buddy can take their turns just like against an AI or multiplayer then hand it off for the other person’s turn.  This is awesome for hanging out with a buddy in a line or on a road trip or just hanging out in a room. 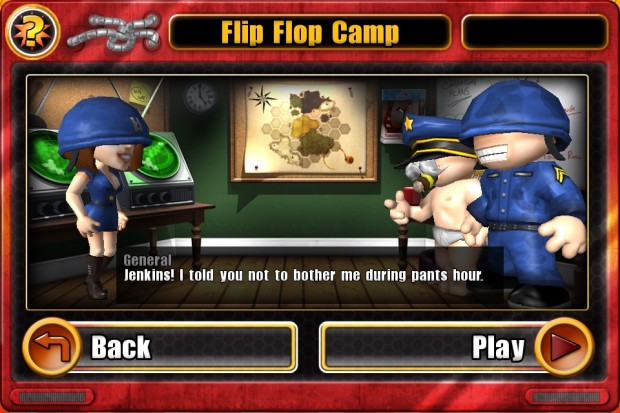 This game’s name is meant to be humorous but the fact is it is spot on.  This is a great big war game on a small platform, don’t let the silly fun of the graphics deceive you or the fact that most of the best strategy games are on PC or console.  Great Big War Game is a polished, challenging and amazingly, well-built game that truly makes the most of all the features it’s build can offer.  I kept suffering from “one more round” syndrome even when it came time to actually stop playing and write the review.  I will be playing it when I am running around, when I am in bed getting ready to sleep, riding shotgun in the car… you get the point.  Just because I am done reviewing this game doesn’t mean I am anywhere near done playing it some more.  Thank you Rubicon for bringing this gift to gamers for $2.99 and trust me I will be picking up the DLCs next for between $.99-$1.99.  If you like Worms, Jagged Alliance or strategy games like Command and Conquer or Starcraft or Words With Friends or better yet all of the above, do yourself a favor and pick this up. 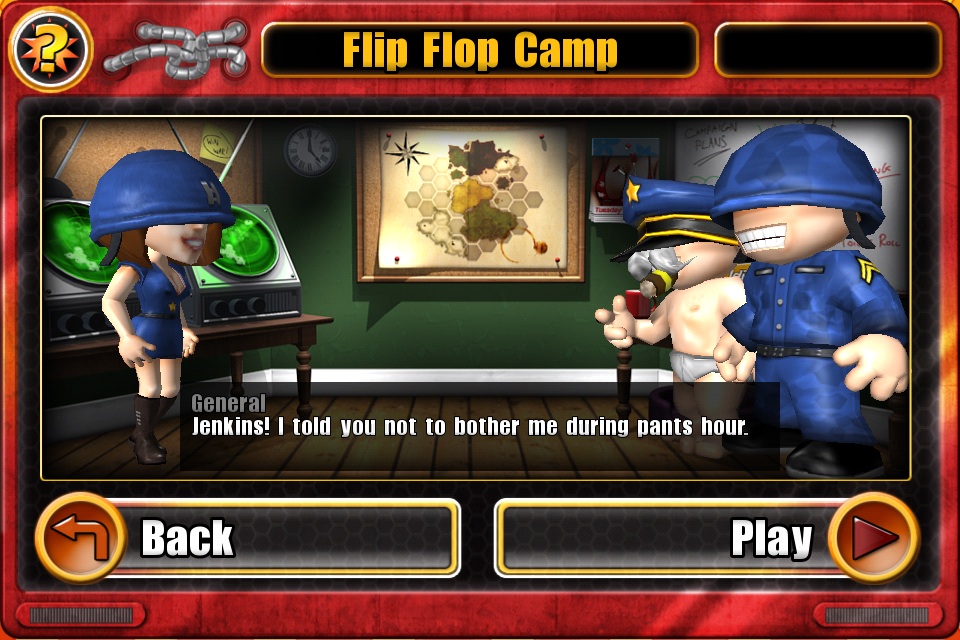 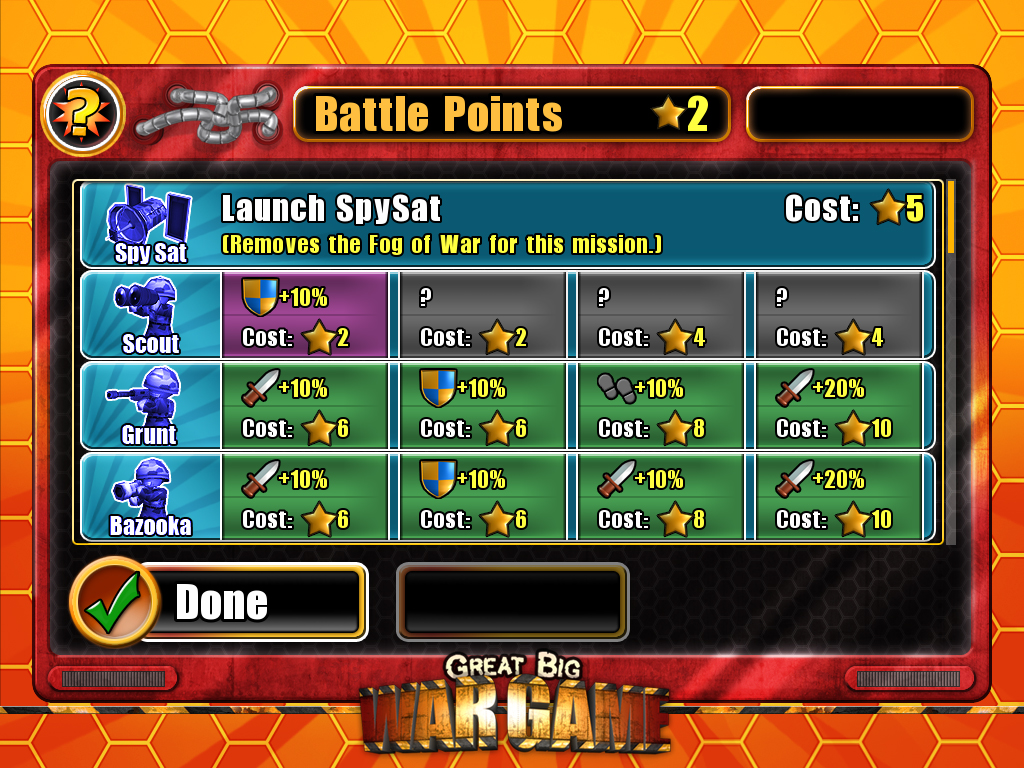 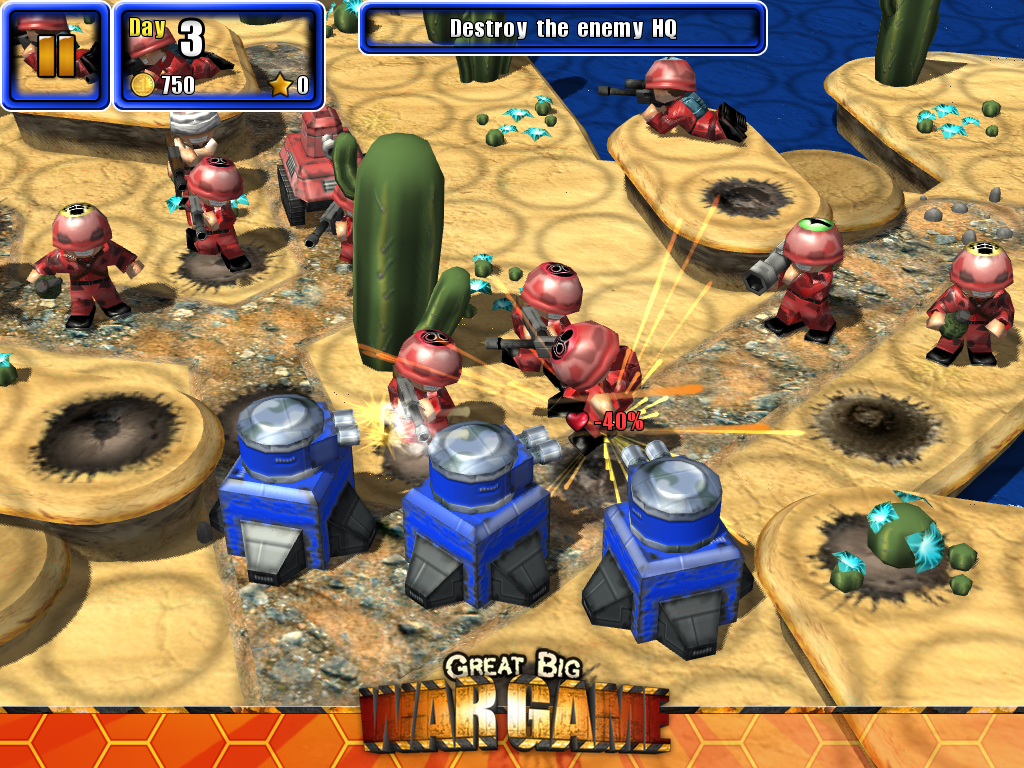 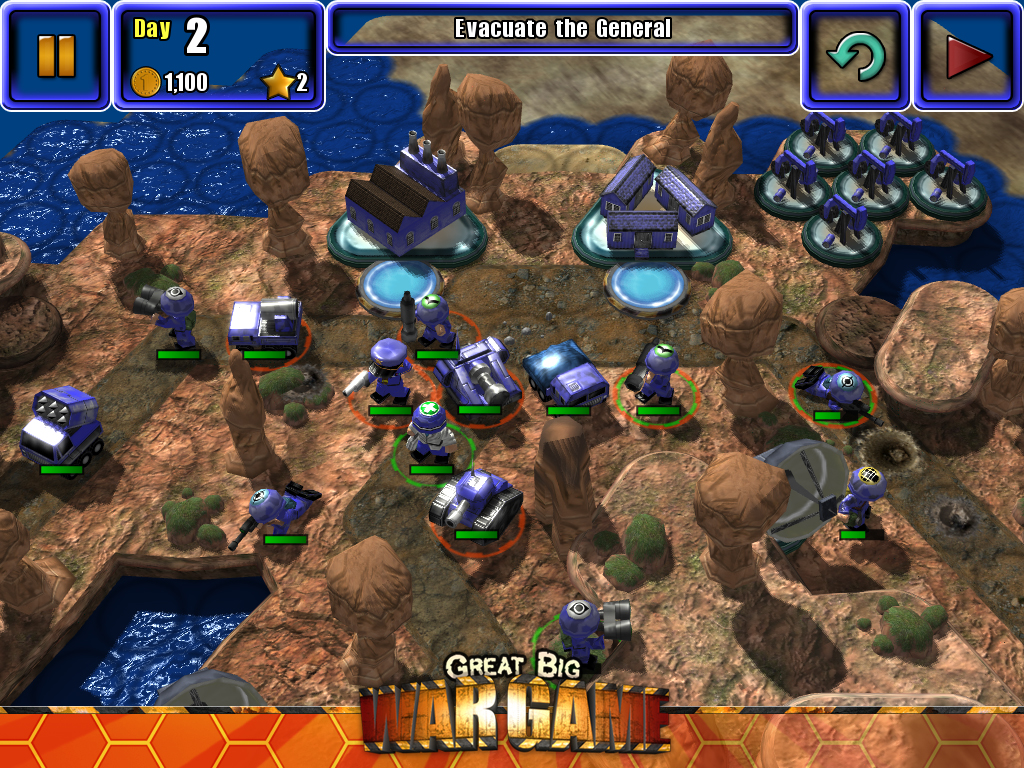 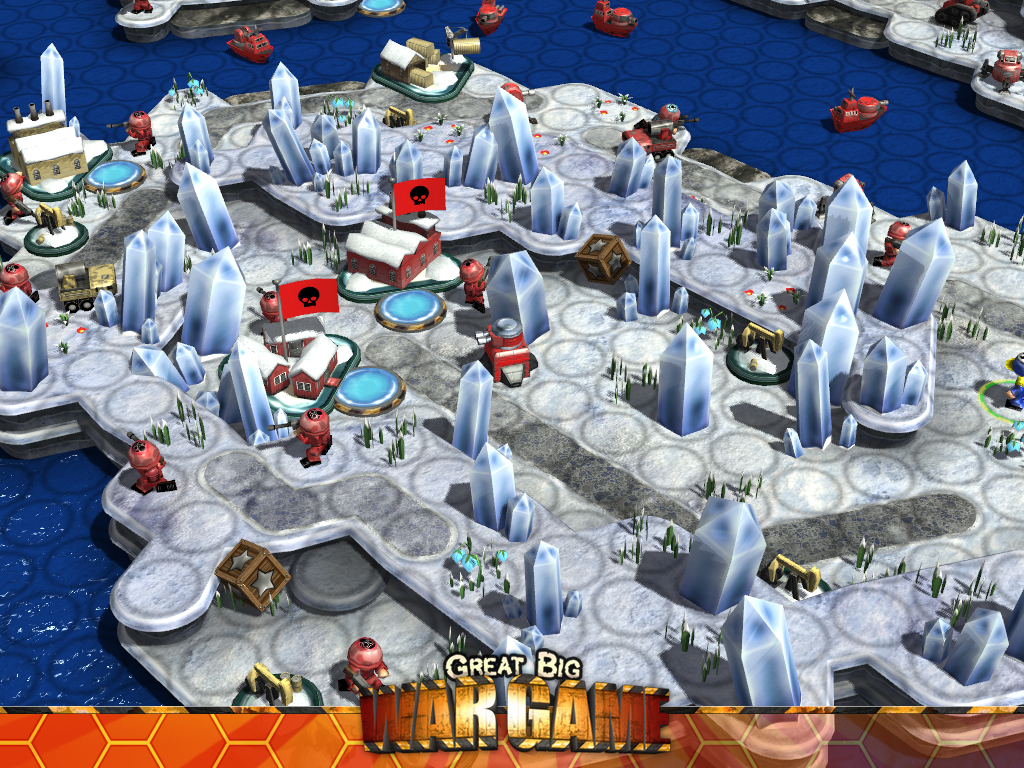 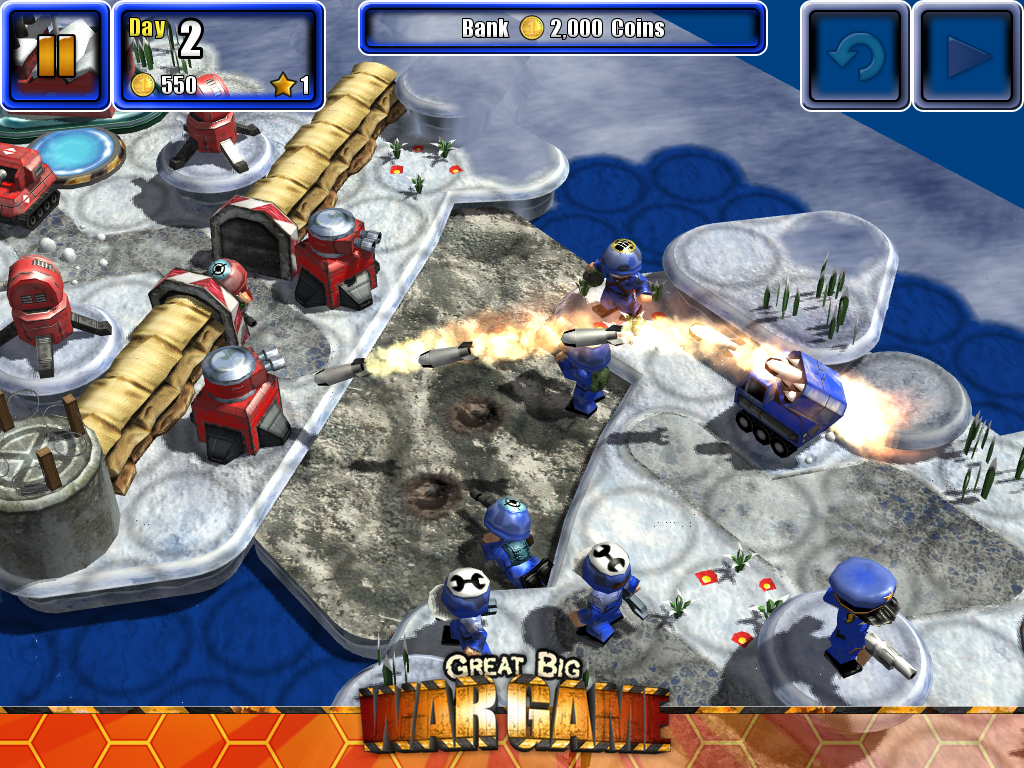 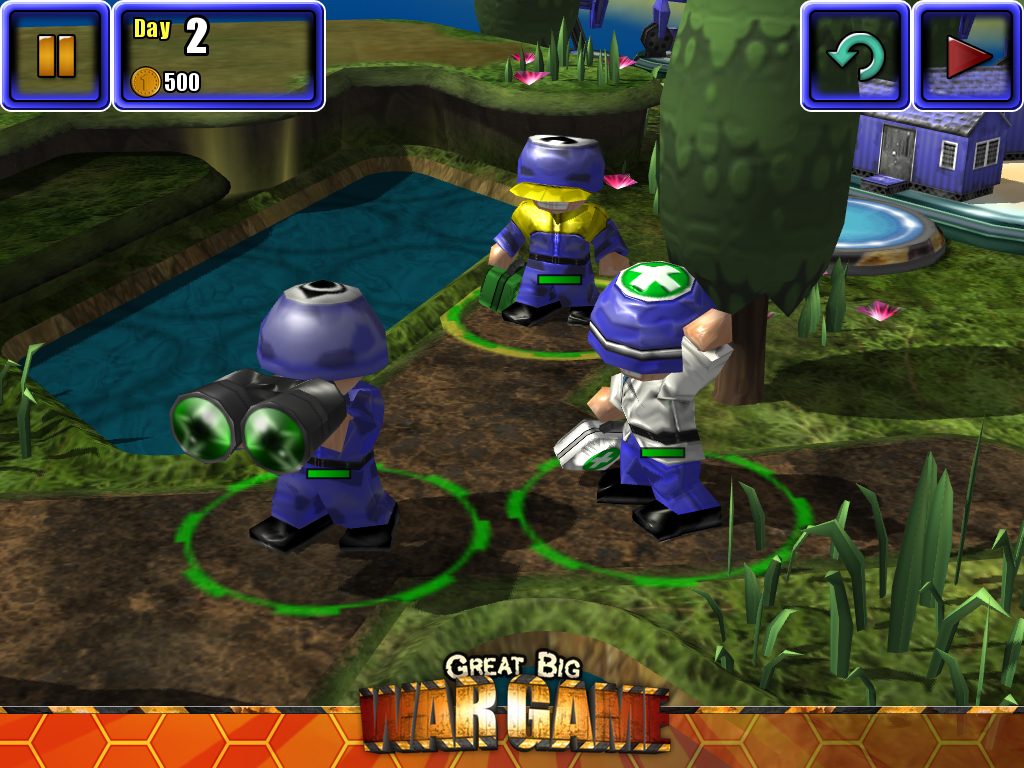 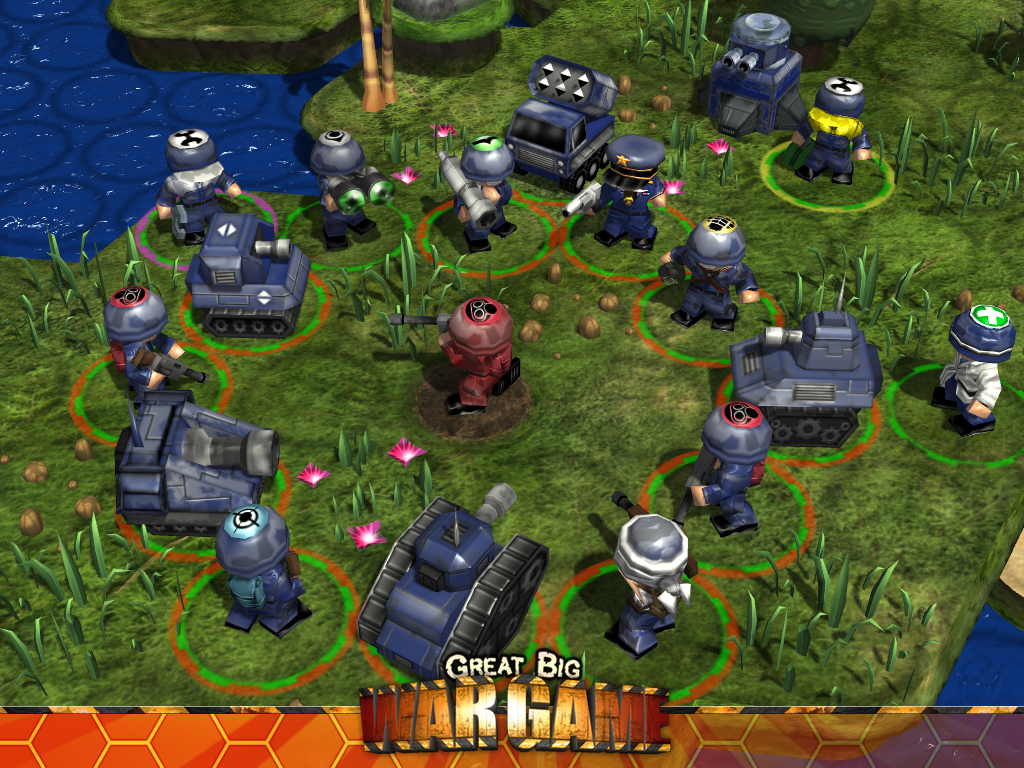 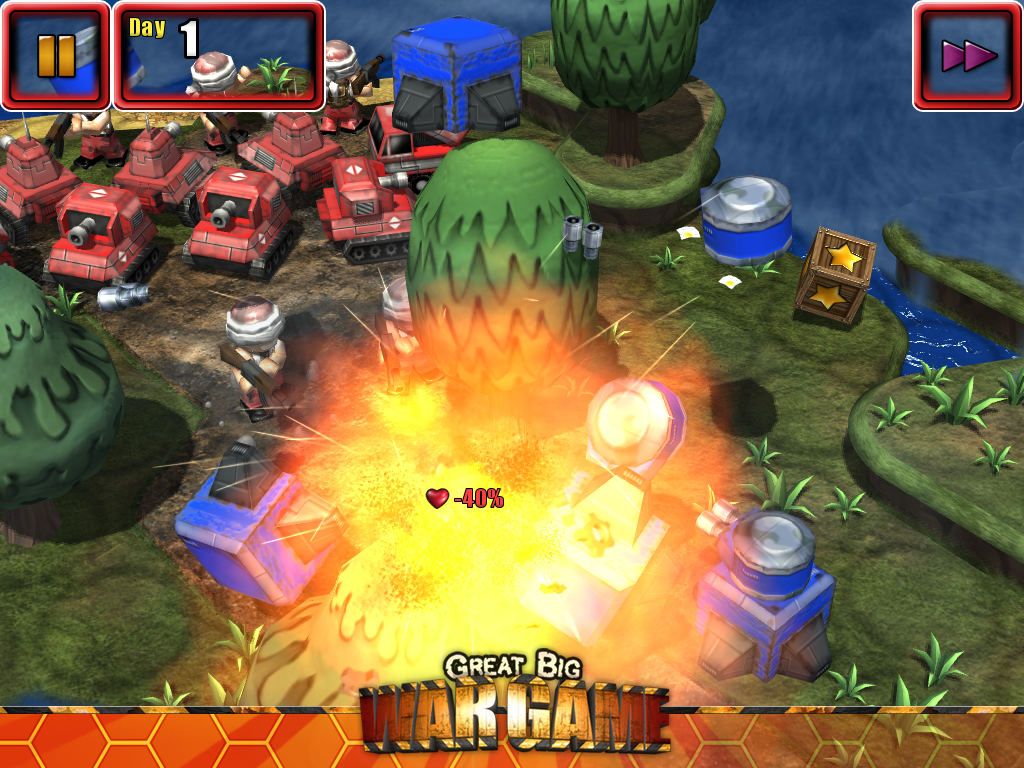 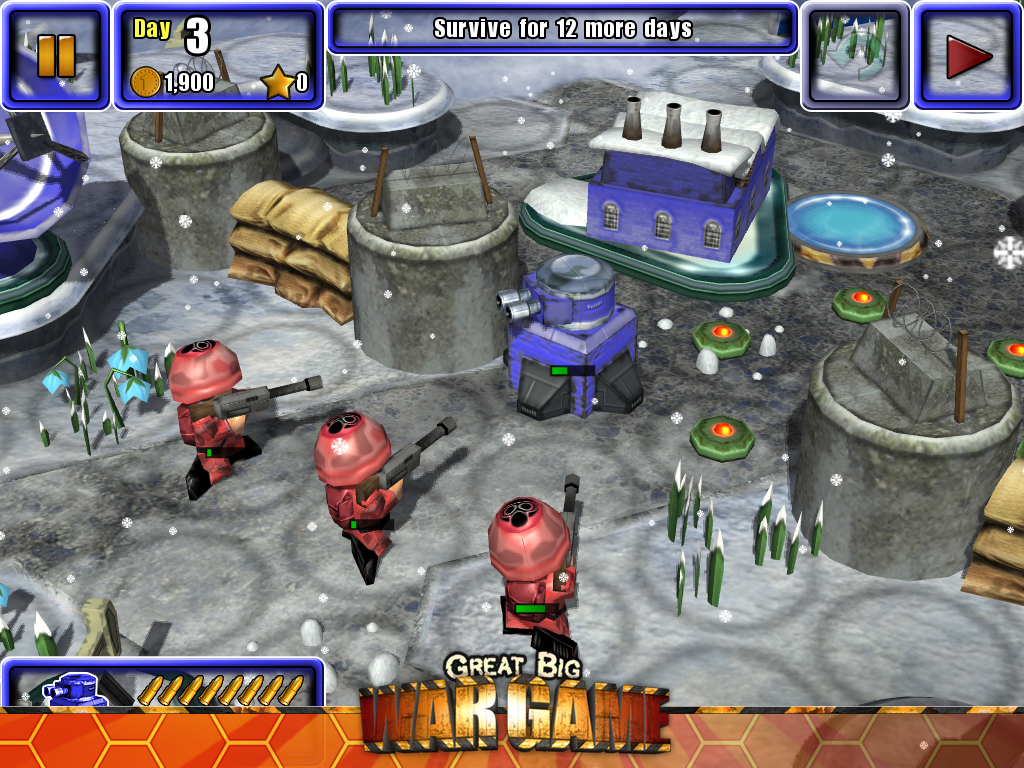 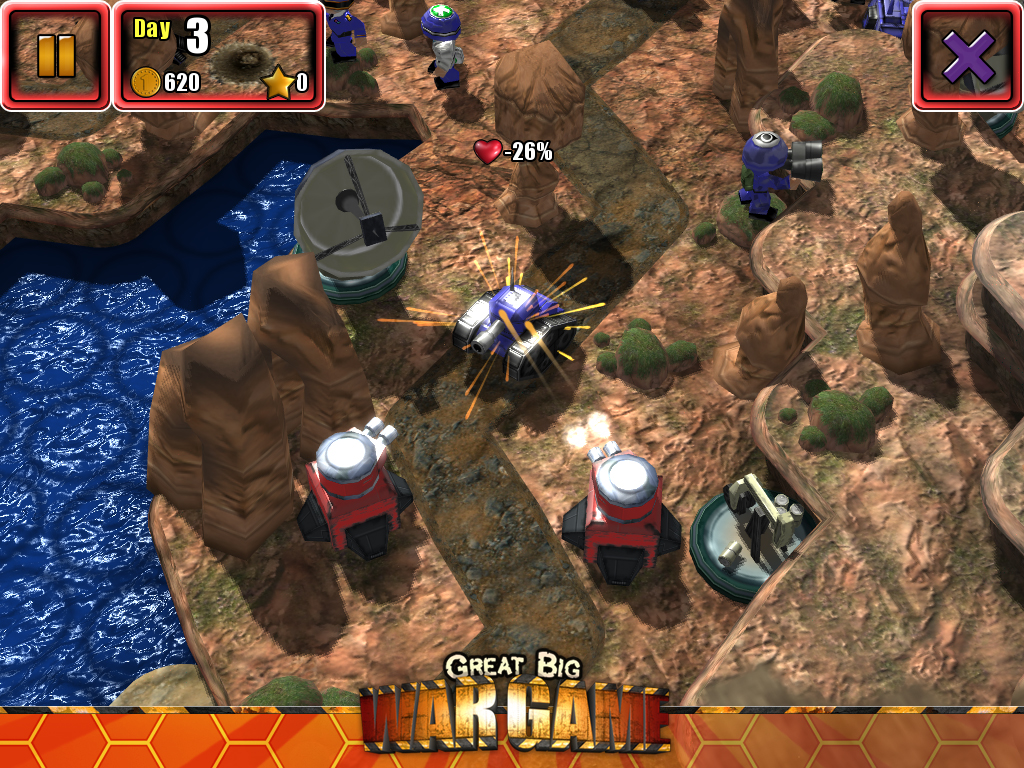 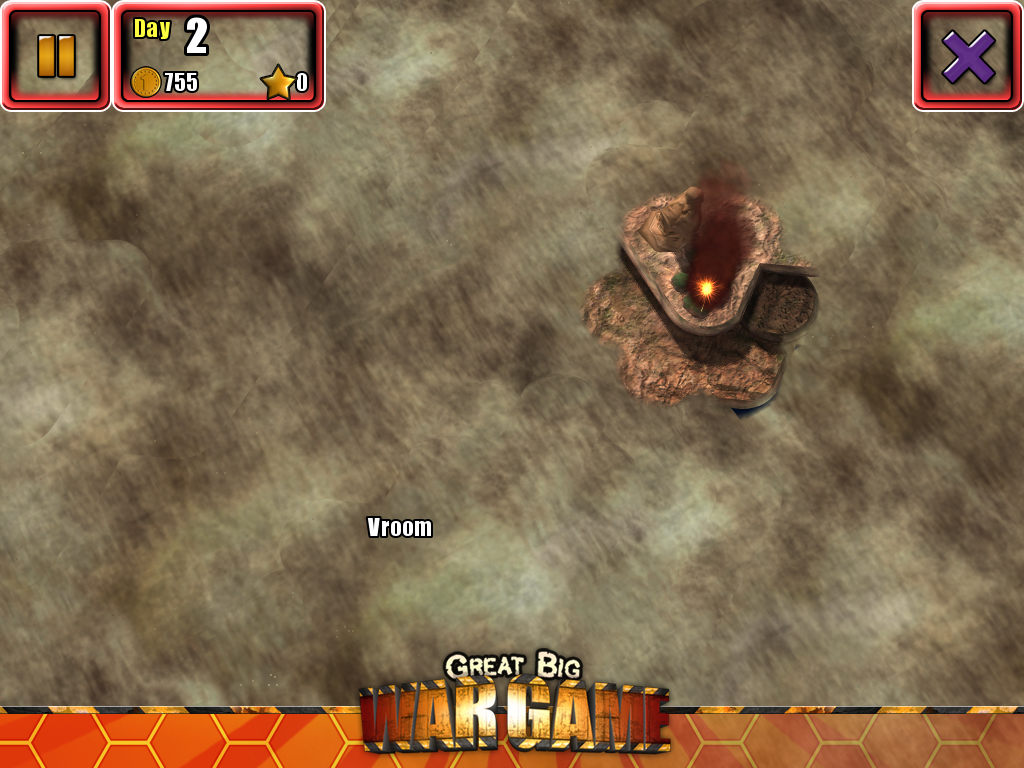 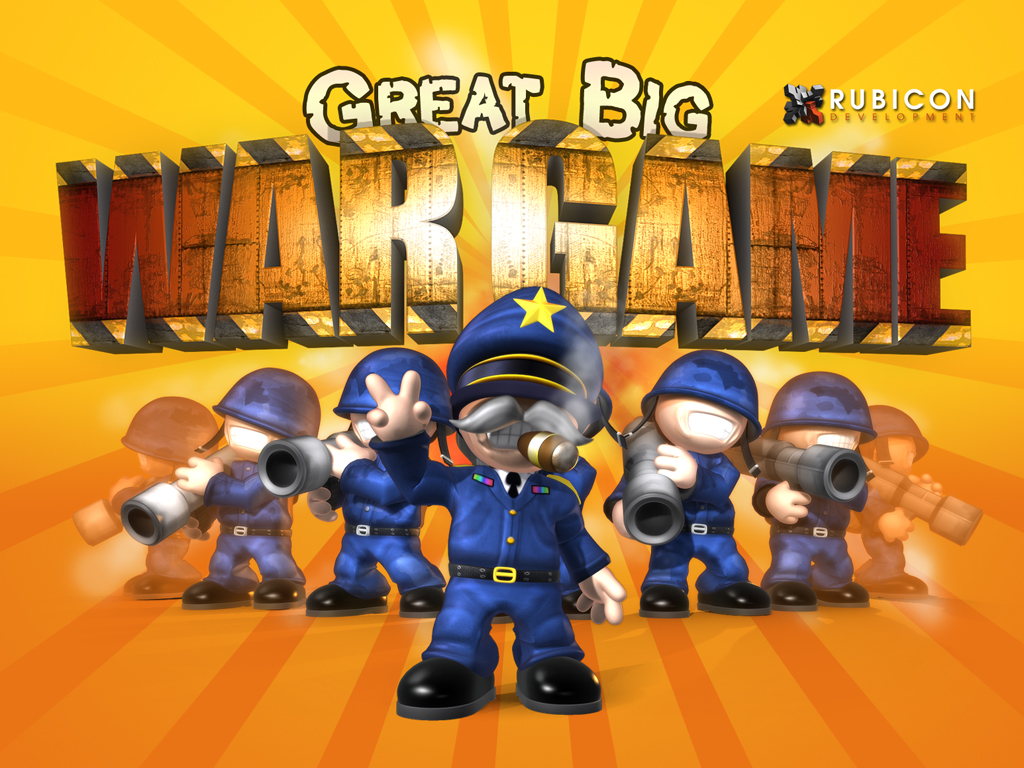 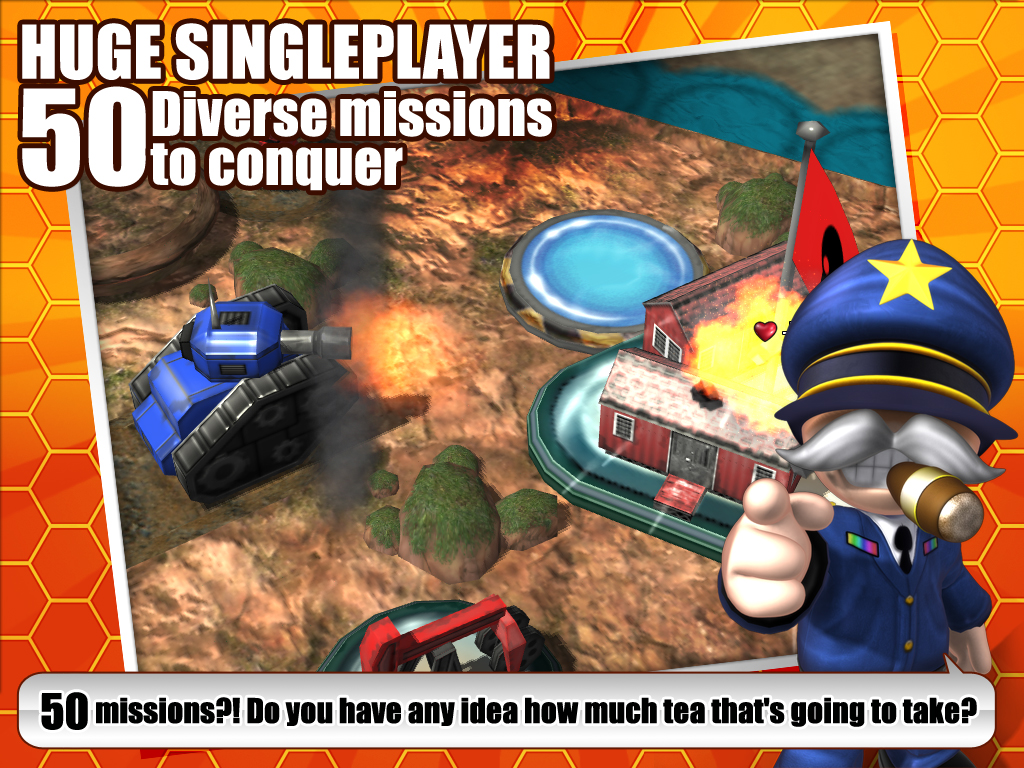 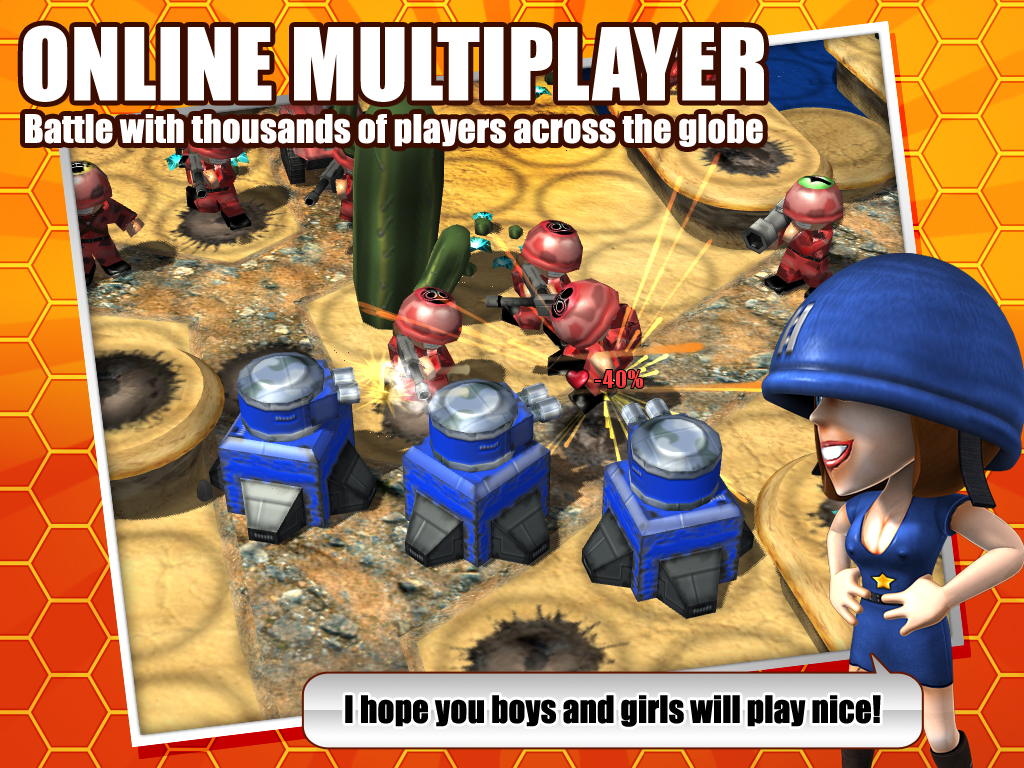 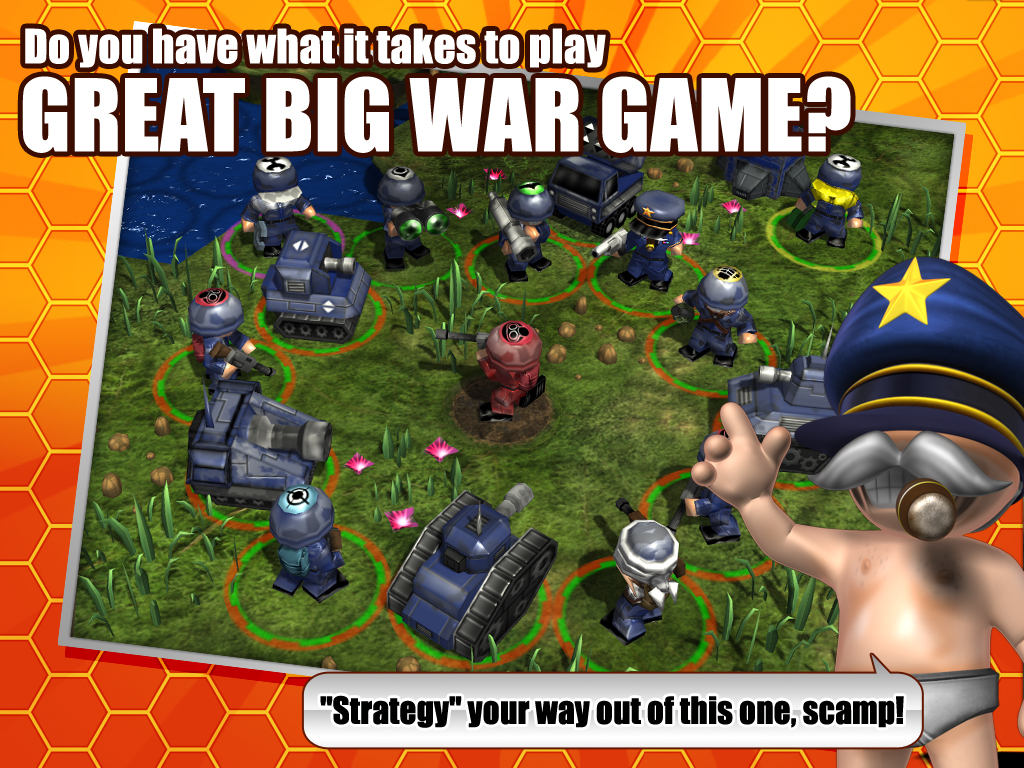