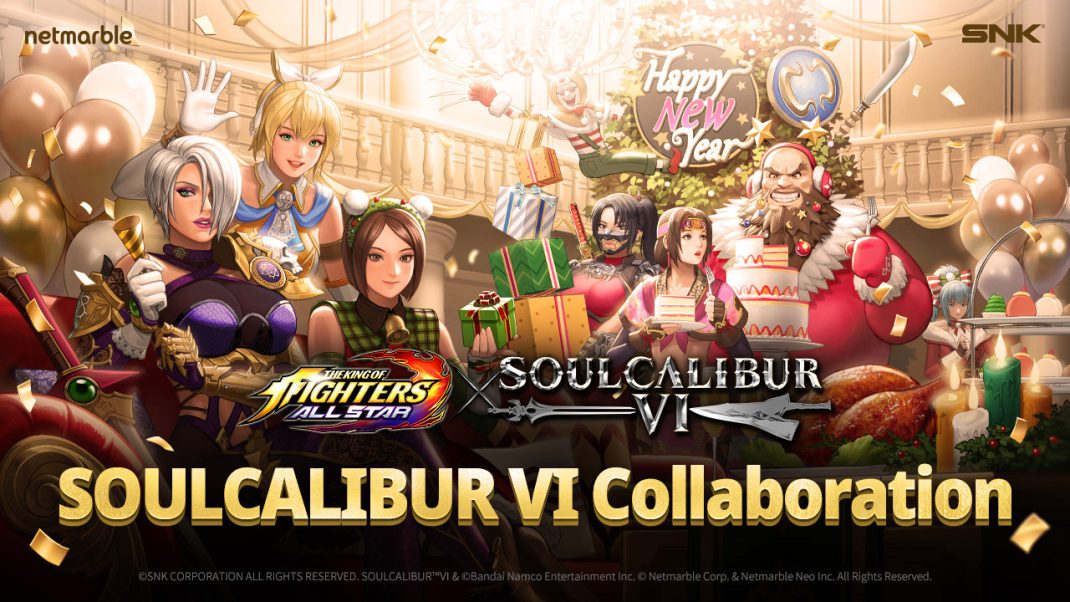 SOULCALIBUR VI Characters Come to THE KING OF FIGHTERS ALLSTAR

Netmarble, a leading developer and publisher of high-quality mobile games, has launched a holiday-themed update for its popular mobile action role-playing game THE KING OF FIGHTERS ALLSTAR in collaboration with Bandai Namco Entertainment Inc.’s SOULCALIBUR VI to bring the two iconic fighting game franchises together.

Today’s collaboration brings two SOULCALIBUR mainstays to THE KING OF FIGHTERS ALLSTAR roster, along with a plethora of events for players to unlock themed-rewards, event coins and more, all with a touch of holiday cheer.

SOULCALIBUR’s legendary ninja Taki also brings her iconic dual-wielding swords to the fold with today’s update as EX Taki (Blue Element / Attack Type). Her quick strikes give her a Leader Skill that increases ATK and Critical DMG of [Extreme] Fighters. EX Taki is also marked by increase of ATK and decrease of DMG for a certain time upon tagging in.

Diverse in-game events such as Collection Room Event, Collab Dream Match and Collab Rush Dungeon will be held and, for even more rewards, players can access the following with today’s update:

THE KING OF FIGHTERS ALLSTAR continues to collaborate with global fighting game franchises such as, SAMURAI SHODOWN, Street Fighter, Seven Knights, and more. Featuring all of KOF’s classic fighters from ’94 to XIV, with more than 130 fighters available to collect, the tournament to find the best fighting champion in the world continues. The fast-paced PVE and PVP fighting action has players battle through waves of enemies, giant bosses, and rival fighter teams. These epic battles are paired with cutting edge graphics, bold colors, and lightning-fast animations for the ultimate THE KING OF FIGHTERS experience.

The SOULCALIBUR series has shipped 15 million copies with dedicated fans all over the world. SOULCALIBUR VI represents the pinnacle of 3D weapons-based 1v1 fighting and launched with fan-favorite characters and all-new gameplay mechanics while also steeped in lore.

THE KING OF FIGHTERS ALLSTAR is available to download on Google Play and the App Store in more than 175 countries and comes with support for English, Taiwanese, Indonesian, Thai, Spanish, Italian, French, Portuguese, Russian, and German languages.