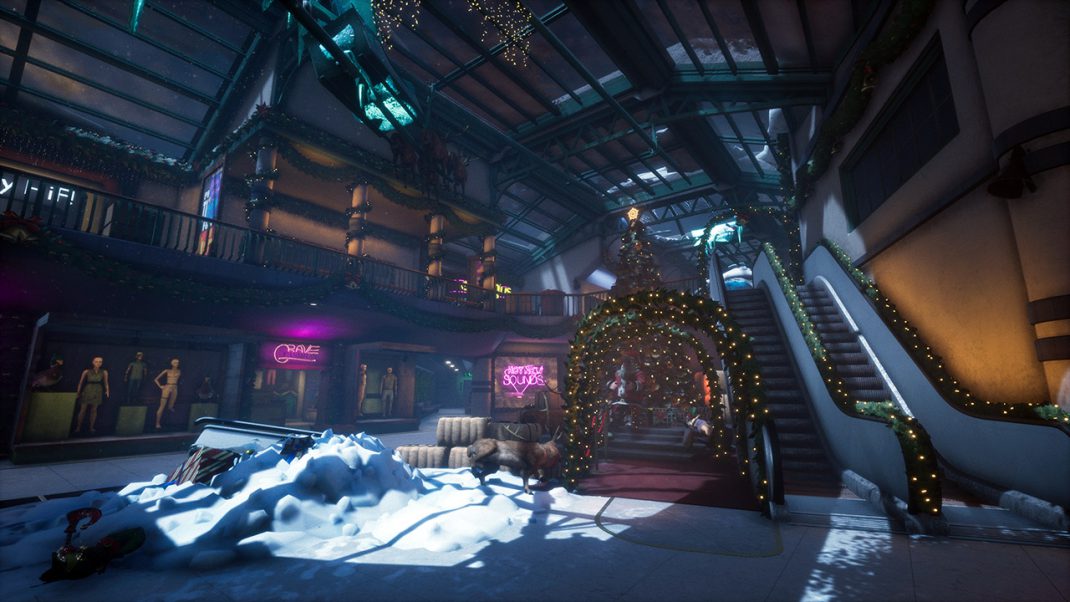 Vaulted Sky Games and Coffee Stain, publisher of Valheim, Deep Rock Galactic and Goat Simulator 3, are pleased to announce that the festive season is arriving in Midnight Ghost Hunt with its fifth major update! Players can explore the new decked-out retro mall map and possess new Hero Props, all while climbing their way through new Prestige Level ranks.

Duck into a range of stores fresh out of the 80s in the brand new Mall map! Whether you lead your opponents on a wild goose chase through the video shelves of ‘Clockbuster’, check out the stock of toy store ‘Ghosts B Us’, or hit up the Coffee Stain café to give your rivals a fright, Ghosts and Hunters alike can explore the halls of the sprawling Mall.

Hunters will need to keep their wits about them as Update 5 brings new Hero Props to scare Hunters into next year! There’s nothing like an eerie animatronic to send a shiver down the spine, and the new animatronic Santa Hero Prop is no exception, which can scoop up Hunters and deal them choke damage for 5 seconds at a time. Along with the mischievous Elf, which throws presents at Hunters that double as possessable props, Ghosts can use the newest set of Hero Props to give the generous gift of jump-scares!

Fans wanting to get into the festive spirit can also adorn themselves with a collection of new skins. Ghosts will be able to transform themselves into the creepy Krampus, while Hunters can embody the Jolly Hunter, complete with Santa hat and reindeer horns, to chase down their opponents in true Christmas style.

Update 5 is also introducing the exciting new Progression Tier System! Every 25 levels, players are promoted to a new tier with a unique profile picture border and title to display their hide-and-seek prowess. Climb the ranks all the way from Apprentice Hunter to Legendary Hunter against friends and foes!

After launching into Steam Early Access in late March to widespread acclaim, Midnight Ghost Hunt is continuing its exciting progression towards full commercial launch with this new update.

Midnight Ghost Hunt is available on Steam Early Access for $19.99, but you can join the hunt for half price in the Winter Steam Sale from today!