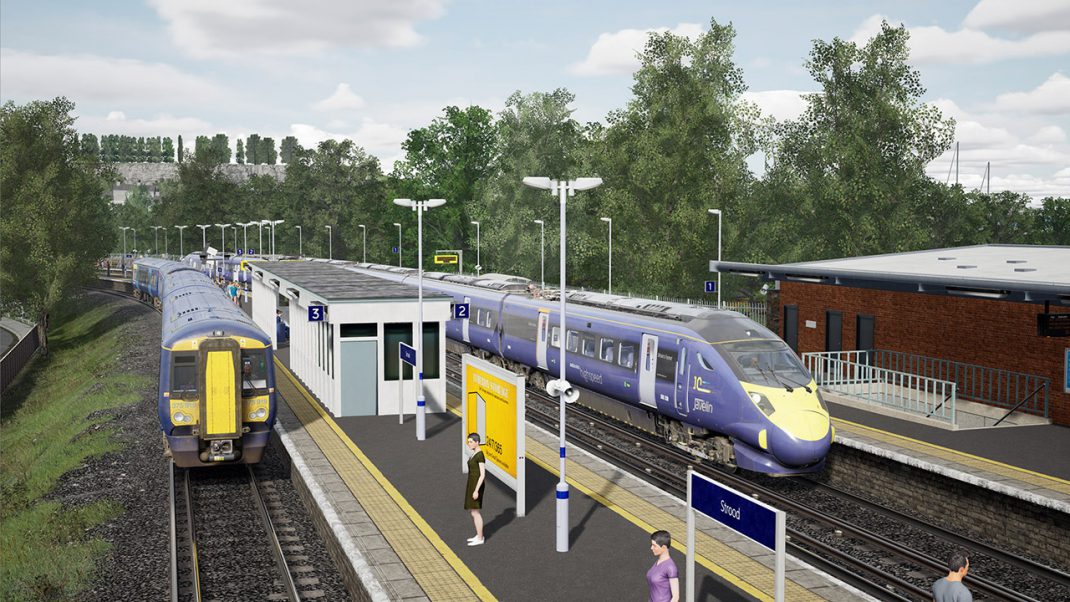 Dovetail Games, developer and publisher of authentic simulation titles, today released the second development diary video for Train Sim World 3, coming to PlayStation®4, PlayStation®5, Xbox One, Xbox Series X|S, Windows PC via Steam and the Epic Games Store, and Game Pass on Sept. 6. Power defines trains, railways and locomotives across the world as they haul endless lines of freight cars and whisk passengers long distances at high speed. Train Sim World 3 includes some formidable, powerful locomotives and units that the team at Dovetail Games have worked hard on to ensure that the real-world sights and sounds come through to players.

In the game’s U.K. route, power translates directly to speed as players take control of Britain’s fastest domestic passenger service between London St Pancras and Ashford International. Southeastern Highspeed utilises the Class 395 ‘Javelin’ EMU which draws power from overhead wires during its 140 mph runs from the capital, before switching to third-rail power for the slower, winding sections through Medway to the town of Faversham. These impressive units adorn the names of famous British Olympians in the real world, expressing their speed and power.

Schnellfahrstrecke Kassel – Würzburg, Train Sim World 3’s German route, also converts electrical power to high speed, courtesy of the iconic ICE trains. Players can stretch both ICE 1 and ICE 3 units to a mind-boggling 186 mph. Keeping this power tamed is crucial however, with massive viaducts and dynamic weather affecting the handling of these trains along with long tunnels to burst out from between Kassel, Fulda and Würzburg. Freight services can also be operated in-game, slotting between the high-speed passenger services and running well into the night.

American locomotives have always been powerful, being larger and louder than their European counterparts. Train Sim World 3 places players at Cajon Pass, California where some of the steepest gradients requires maximum throttle going up and careful application of the brakes coming down. BNSF’s 4400hp ES44C4 joins the SD40-2 locomotives in hauling some of the U.S.A.’s longest trains through this challenging stretch of railroad between San Bernadino and Barstow, often working in multiples to provide even more power to those in the cab.

In Train Sim World 3: Deluxe Edition, players can experience a form of power like no other, with an updated version of the popular “Spirit of Steam” add-on bundled into this release. Nothing says power more than the hissing, steaming presence of the LMS 8F and Jubilee locomotives as they prepare to chuff both passenger and freight services out of Liverpool Lime Street and onto the famed railway town of Crewe.

Bringing this power onto the screens has been hugely important for Train Sim World 3 and as well as feeling the grunt behind these trains, players can see the sizzling sparks and crackling pantographs of the game’s electric trains. Realistic and layered in-game sounds simulate everything from the squeal of the brakes to the coupling of wagons blasting raw power through the speakers and adding overall to the experience – Big sounds for big trains!

Developed and published by Dovetail Games, Train Sim World 3 will release for Windows PC, PlayStation, and Xbox consoles on Sept. 6, 2022, and will also be available via Game Pass. The title is available for pre-purchase digitally now on Steam and the Epic Games Store, PlayStation®Store, and Microsoft Store with a Deluxe Edition available for £49.99/€59.99/$59.99 and four ‘Starter Packs’ each available for £29.99/€35.99/$39.99.