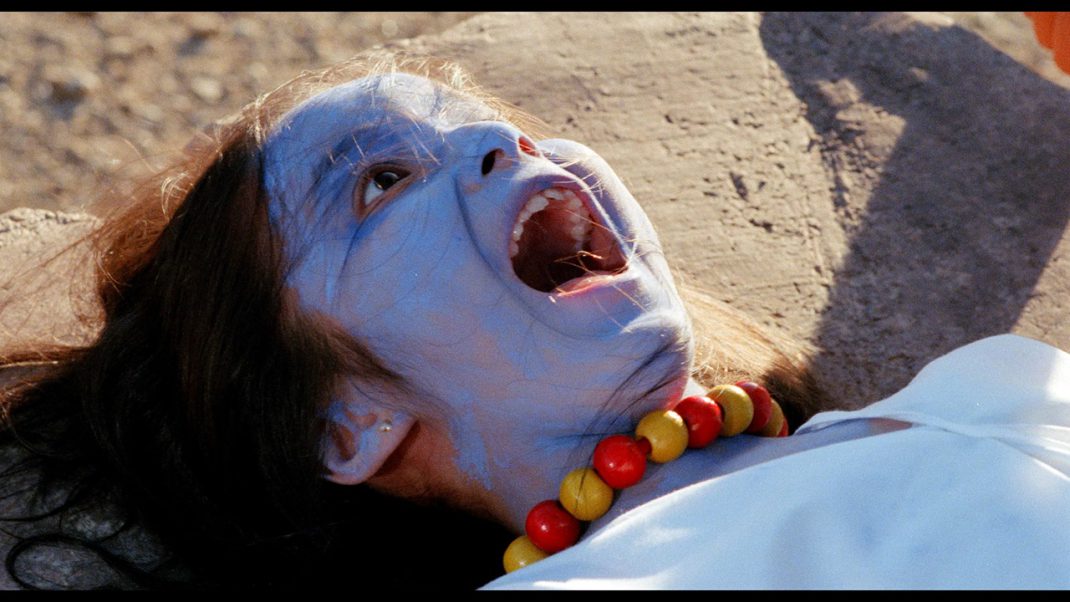 Summertime is in full swing and that means one thing if you’re a cinephile with a spending problem fueling your mission to single-handedly keep physical media alive: Sale season!

Kino-Lorber, Severin, Barnes and Noble’s semi-annual Criterion/Arrow Video 50% sale… Heck, even Target runs a three for two sale this time of year and they stock plenty of boutique releases on their website. The fact of the matter is that there are plenty of deals if you know where to look.

This year I found myself participating in Vinegar Syndrome’s Halfway to Black Friday sale for the first time. The sale typically runs Memorial Day weekend and is your chance to get most everything available on their site at half price. This also marks when they tend to release some of their biggest titles of the year and issue new limited editions of previous titles.

With their lovingly restored releases of some truly oddball and obscure films thought lost to the video store graveyard, Vinegar Syndrome has quickly become my favorite boutique distributor and Halfway to Black Friday 2022 was a great way to beef up their presence in my library. Here are some snap thoughts on the titles I came away with…

The Plot: When Eric, a socially awkward cinephile, is pushed just a little too far he dresses up as a series of famous characters from Hollywood history to make the citizens of 1980 Los Angeles pay the price in blood.

Best Bonus Feature: Fade to Black features a brand new audio commentary by the hosts of horror fan podcast The Hysteria Continues. I’m a sucker for any time fans are brought in to provide commentary and this track brings the goods to this movie about fandom gone wrong.

Worth Buying? If you can find it, yes. This has been one of Vinegar Syndromes more popular releases, going so far as to be one of the handful of titles to earn a second limited edition slipcover. As it stands both the slipcover and standard editions are sold out but it should be fairly findable on the secondhand market. Definitely worth hunting down this vastly under-appreciated slasher flick. 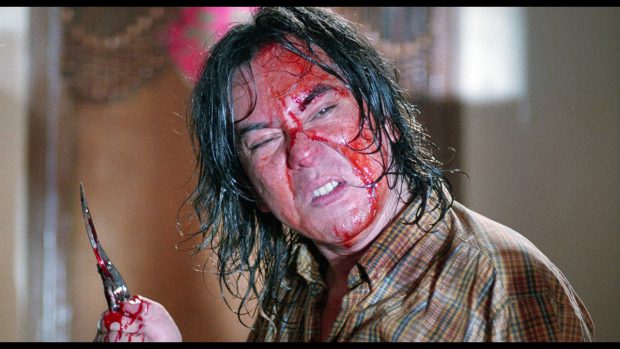 The Plot: A fugitive from the law grapes his way across South Africa, contracts Ebola, and becomes patient zero in an epidemic of blood and gore all in glorious 4K.

Best Bonus Feature: This release features an all new audio commentary by film historian Sam Deighan as she contextualizes the madness of this shocking Category III (aka Hong Kong’s NC-17) film.

Worth Buying? Ebola Syndrome is a bit much. It’s definitely one of those movies you watch with an eye on the door, wary of who might accidentally walk in on you watching what scene. That said, if you can check your morals at the door you’ll definitely find some fun to be had with this gratuitous piece of sleaze.

The Plot: Homegrown Horrors brings together three regional horror films from the late 80s and early 90s. First up is Beyond Dream’s Door, a psychological thriller about a man’s apocalyptic dreams bleeding into waking life. Next is Winterbeast, an absolutely wild Northeast cousin to the Evil Dead movies. Rounding out the set is Fatal Exam, a supernatural slasher that warns of the dangers of mixing haunted houses, a mysterious killer, and painfully long runtimes.

Worth Buying? Definitely. Especially so if you’re a fan of low-budget regional genre filmmaking. If you’ve got any mix of the following sets on your shelf – Weird Wisconsin, He Came From The Swamp, The Dungeon of Andy Milligan, The Herschell Gordon Lewis Feast, Al Adamson: The Masterpiece Collection, etc. – this belongs right beside them.

The Plot: A strict and morally rigid censor confuses the horror films of a notorious director with the events that may have taken her sister’s life. Violence ensues.

Best Bonus Feature: “Ban the Sadist Videos!” is a two part feature length documentary on video nasties. If you’re interested at all in schlock filmmaking and the history of the UK’s censorship, this feature is well worth the watch.

Worth Buying? Absolutely. Censor made strong showings on the festival circuit a few years ago and has found a worthy home as one of the first films released under the Vinegar Syndrome Pictures imprint. It’s a taut psychological thriller with robust bonus features and spectacular packaging in its limited edition release.

The Plot: A crime novelist uses his past expertise as a police officer to uncover the mysteries surrounding a genetically engineered humanoid monster stalking and killing the residents of early 80s Los Angeles.

Best Bonus Feature: For some reason, Seattle based goth horror band Dracula Party decided that 2021 was the year to write and record a song based on the plot of Scared to Death. Then they made a music video. It’s terrible and weird but most of Vinegar Syndrome’s releases exist on a spectrum of “terrible” to “weird” so I’ll allow it.

Worth Buying? If you’re a fan of cheesy self-serious sci-fi horror cranked out in the immediate wake of Alien then sure, give it a go. Otherwise pass.

Voyage of the Rock Aliens

The Plot: An intergalactic rock band makes its way to Earth in search of good tunes in this off-kilter 80s musical that begins with a Pia Zadora/Jermaine Jackson music video and ends with a tentacle monster attacking a high school.

Best Bonus Feature: “Where They Are Now: Reuniting the Band Rhema in the 21st Century” is a newly produced retrospective on the band featured in the film, just in case you can’t get enough of this store brand Devo.

Worth Buying? While not the most stacked release I got during the sale, Voyage of the Rock Aliens is some of the most fun I had with any of these titles save for one we’ll get to in a bit. Besides, there’s a How Did This Get Made? episode about it and you know that’s a sign of a good time. 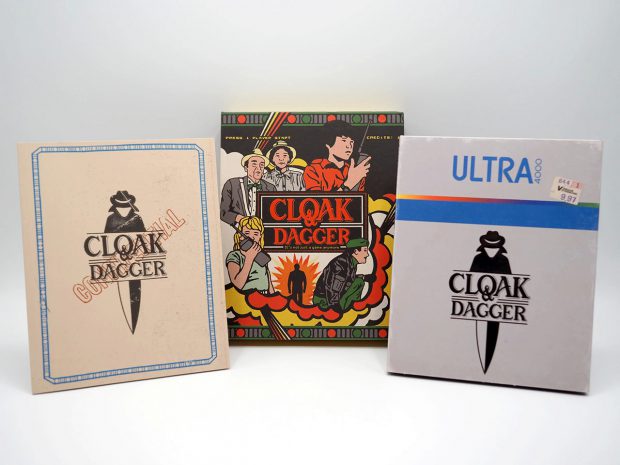 The Plot: A young boy’s table-top spy RPG bleeds into the real world as he finds himself caught up in the world of Cold War espionage in mid-80s San Antonio, Texas. His only hope? Hallucinations of Jack Flack, his favorite fictional spy.

Best Bonus Feature: The packaging on this set is superb. Being the label’s third Vinegar Syndrome Ultra release, Cloak and Dagger features the same magnetic clasping box and perfect bound making of book that previous releases Beastmaster and Six-String Samurai do. The art design on this release is impeccable with the interior slipcover perfectly matching the packaging of 1980s Atari cartridge boxes right down to the price sticker and misspelled copy.

Worth Buying? At the time of this writing there are still over 1000 left in stock but that can change. I missed the boat on Beastmaster and had to pay a pretty price for it on eBay. VSU releases have quickly earned the prestige they deserve with their over the top packaging, loads of special features, and once a year release schedule. Buy this film immediately.

The Plot: A mute prostitute spends her free day each week learning how to drive, shoot, and kick karate ass in order to take revenge upon the men who’ve ruined her life in this rape-revenge shocker from Sweden.

Best Bonus Feature: Thriller, while banned in Sweden and much of Europe at the time of its release, eventually found new life overseas. This limited edition release contains bonus blu-ray and 4K discs containing They Call Her One-Eye, the American recut of the film.

Worth Buying? If you can find it, yes. This release was long rumored in various Vinegar Syndrome fan communities and it immediately became the chief cause for FOMO in this year’s Halfway to Black Friday sale. While there is a new limited edition containing only the original cut in its own slipcover, the now sold out first edition is the only place to find the American version of the film. 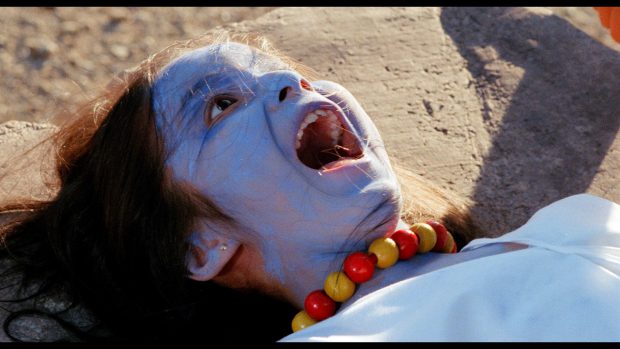 The Plot: Tourism, Catholic priests, Dia de Los Muertos and Aztec rituals all collide in a bonkers film directed by a man whose previous biggest credit was writing an episode of Chip and Dale’s Rescue Rangers and featuring special effects by the director of the movie Troll.

Best Bonus Feature: The Laughing Dead is pretty sparse on features but credit is due to Unholy Assembly, a 35 minute making of that sheds a little light on what went into this truly weird movie full of kids cussing out priests and people turning into (spoiler) Aztec gargoyle monsters.

Worth Buying? The overall package isn’t anything special but the next time sale season comes around and you can grab this at a good price, go for it. It’s not the *best* bad movie out there but it can hold its own for a night of fun watching with friends.

The Plot: When a gang of motorcycle ninjas takes over central Florida’s cocaine trade only one team of Tae Kwon Do masters/rock band/family of orphans can stop them – Orlando’s hottest night club act Dragon Sound!

Best Bonus Feature: Miami Connection was the brainchild of one man – regional celebrity and Tae Kwon Do studio entrepreneur YK Kim. Buckle up because there’s a whole audio commentary featuring the man as he waxes poetic on his mission to bring Tae Kwon Do to the masses through this forgotten gem of a film.

Worth Buying? Yes. A thousand times yes. Miami Connection is absolutely insane and the best time I’ve had watching a movie eight times in one month this year. The acting is terrible, the story makes no sense, and it’s the The Room of martial arts flicks. There is no way you watch this movie without it leaving a giant smile carved into your face.

And there you have it. This was my first, and definitely not last, time participating in any of Vinegar Syndrome’s sales. The Criterion to Arrow to Vinegar Syndrome pipeline has been strong with me over the past year and this sale helped them claim an even more sizable chunk of my shelf space. With physical media being all but a dying art form its good to see companies like these keeping the torches lit and it makes me happy to be a good consumer and help support them in their restoration, preservation, and celebration efforts.