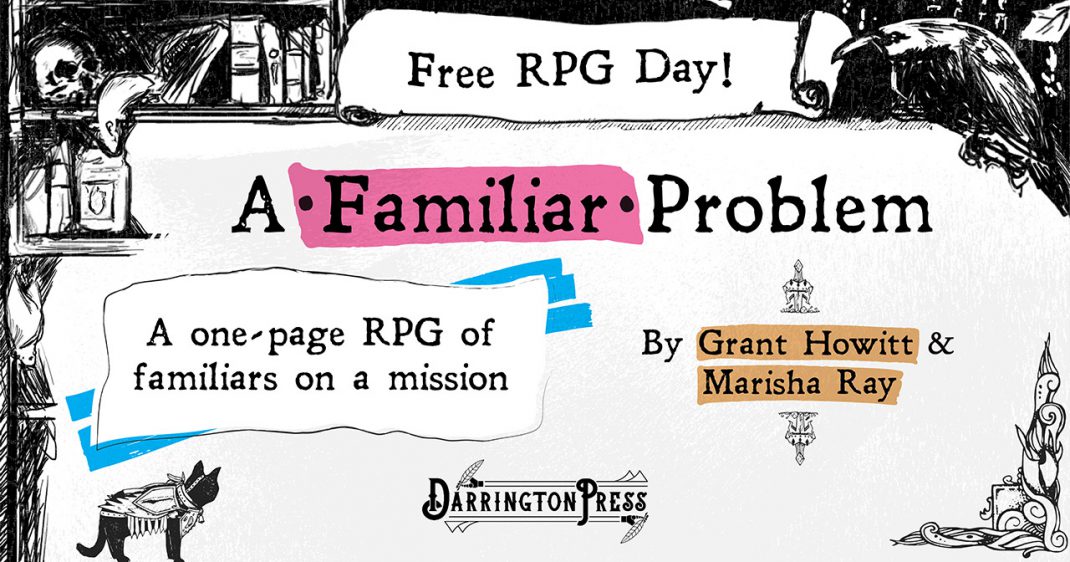 In A Familiar Problem you’ll play as a scrappy and stressed out group of familiars trying to get a grip on the chaotic lives your adventuring party subjects, and make a difference any small way you can. To prove you’re up to adventuring, you’ll band together and undertake a daring quest of your own! You can pick up your free copy of A Familiar Problem at friendly local game stores participating in Free RPG Day on June 25th in the US and July 23rd internationally, with a wider digital release set for later this year. Visit freerpgday.com to find a participating store near you.

Additionally, Marisha Ray will be running this game in an exciting one-shot titled A Familiar Problem: Sprinkle’s Incredible Journey! The familiars in question will include beloved Critical Role favorites alongside new friends of fur, scales, and a whole lot of chaos. Players in this upcoming one-shot include Critical Role founders Laura Bailey, Matthew Mercer, and Travis Willingham, with Heidi N Closet (Ru Paul’s Drag Race), Isabella Roland (Dimension 20) joining the table. A Familiar Problem: Sprinkle’s Incredible Journey! will air on Thursday, June 23 at 7PM Pacific on Critical Role’s Twitch (twitch.tv/criticalrole) and YouTube (youtube.com/criticalrole) channels. VOD is available immediately for Twitch channel subscribers and will be available on Critical Role’s YouTube channel on June 25 for Free RPG Day. A Familiar Problem: Sprinkles Incredible Journey! will also be available in a podcast format one week after its initial airing on the Critical Role podcast feed, which is available via Spotify, Apple Podcasts, and Google Podcasts.