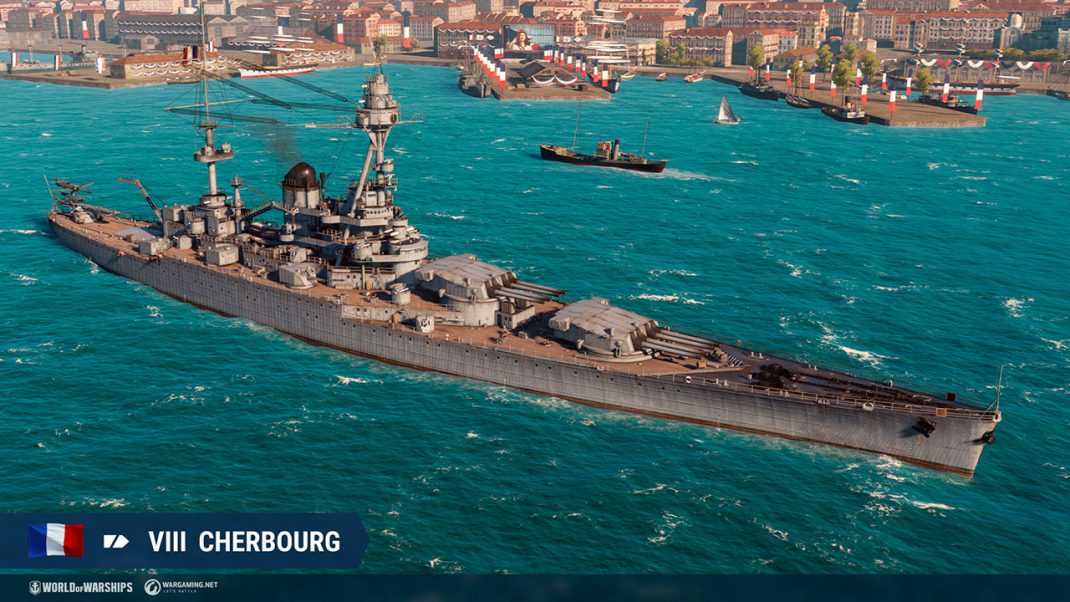 World of Warships Getting Brand New French Cruisers and More

Wargaming, publisher and developer of the naval multiplayer free-to-play game World of Warships, will launch on May 19th its latest content update, bringing with it brand new French Cruisers, a fresh batch of Azur Lane content, alongside fully introducing Italian Destroyers into the Tech Tree. In addition to these headline content additions, update 0.11.4 also brings new seasons of Ranked and Clan Battles, and the introduction of the praised Arms Race mode in Random and co-op Battles.

Allez les Bleus!
Three new French cruisers make their debut appearance in this update. Available in early access, players will be able to take the helm of the Tier VIII Cherbourg, Tier IX Brest, and Tier X Marseille. These new ships, projects of the French Navy before creating the famous Dunkerque and Richelieu class, will bolster the existing roster of French cruisers, featuring large-caliber guns mounted on the bow. Whilst working best at long to medium range, with the help of their powerful secondary battery guns, these new ships can also pack a punch in close-range encounters. To celebrate their arrival, the Port of Marseille has been updated with a fresh coat of paint.

The Return of Azur Lane
The girls who soar on the seas are back in Update 0.11.4 armed with an assortment of new content for players to show off. Available during the update are ship camouflages for the Iowa, Indomitable, and Shōkaku, alongside 6 new commanders include the famous Bismarck and New Jersey as well as commemorative flags. The ship AL Aurora and AL Azuma will expand the roaster of Azur Lane ships in the game.

Iconic Italian Destroyers Available for Research
Following their initial rollout, Italian Destroyers will now become obtainable within the tech tree. Equipped with fast reloading torpedoes, they are bound to make a splash while taking their foes down with breathtaking speed. The entire branch of Italian destroyers is available for players to research with the release of Update 0.11.4. You can learn the details about new Italian ships here.

New Season of Ranked Battles and more!
Alongside the return of the fan-favorite Arms Race game mode in Random and Co-op Battles, Update 0.11.4 brings a brand new season of Ranked Battles to World of Warships. This season, in all leagues, battles will take place in a 6v6 format on Tier VIII and IX ships with players earning their stars to progress through the rankings. The new season of Clan Battles, named “Cayman,” will pit clans against each other in Tier X and Superships for valuable steel, coal and signal flags!

For a full list of updates and changes, find the full patch notes here.