IEM Dallas 2022 marks ESL’s first live event in the Americas in almost three years and will take place at the first full-scale DreamHack festival in nearly 2.5 years. The most recent ESL events on U.S. soil were IEM Chicago and ESL One New York in 2019. At both previous events, a U.S. team eventually secured the trophy. We will know whether this is bound to happen again in just one month. 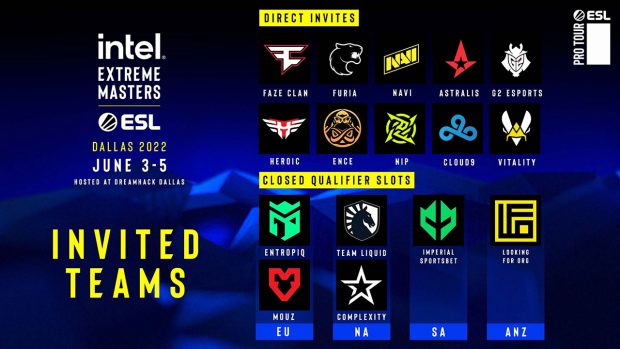 What’s at Stake
While battling it out for a share of the $250,000 total prize pool, 16 top CS:GO teams will face off starting May 30 to earn a spot in the playoffs and play on stage in front of a live audience. The IEM Katowice 2022 runner-up G2 Esports, the ESL Pro League Season 15 runner-up ENCE Esports, the Danish powerhouse Heroic, the recently signed Cloud9 roster, and the remarkable Australian squad LookingForOrg are all among the qualified teams.

Having a chance to compete on their home turf, Complexity Gaming has also secured its spot in the tournament. They are joined by the two Brazilian squads FURIA Esports and Imperial Esports, who will show whether it’s new blood or the veterans who make the biggest impact. Ninjas in Pyjamas also has a shot at manifesting the effect of their latest roster addition: the young Swede Ludvig “Brollan” Brolin. The Czech organization Entropiq and the German organization MOUZ are the latest two additions to the list as they secured a spot for IEM Dallas by finishing in the top two of the EU Closed Qualifier on May 4.

Furthermore, by securing their spot for IEM Dallas, FaZe Clan will have a chance to earn their third title in the race for the Intel® Grand Slam IV and its $1 million cash prize. To add this desired third out of the four needed wins to their name, they will need to compete with the previous Intel® Grand Slam winners — Astralis, Team Liquid, and Natus Vincere — who all qualified for IEM Dallas as well. In addition, former IEM title holder Team Vitality will also participate in the tournament, offering them the chance to go head-to-head with FaZe Clan in the race to mark their name in CS:GO history.

Finally, the competing teams will be facing off to earn ESL Pro Tour (EPT) points. These EPT points are needed to qualify for and join the already qualified FaZe Clan at IEM Cologne, which will take place in Cologne, Germany, July 5-17.

There is More
For the first time in the history of Intel® Extreme Masters, the event will be hosted by the three-day, immersive gaming-lifestyle festival DreamHack, allowing visitors of the IEM event to enjoy DreamHack Dallas and vice versa.

From a Cosplay Championship, Fighting Game Tournaments, Tabletop Gaming, Indie Games, Live Music concerts, and panels to the beloved and famous Bring-Your-Own-Computer (BYOC) LAN party and an Expo, DreamHack Dallas offers everything gaming under one roof. Combined with the heated-up IEM competition, fans can expect an unforgettable experience.

When and Where to Watch
The group stage of IEM Dallas kicks off on Monday, May 30. Until June 1, two groups of eight teams will battle it out in a double-elimination Bo3. After that, the top three teams of each group will proceed to the playoff stage, taking place live at DreamHack Dallas in the arena of the Kay Bailey Hutchison Convention Center in Dallas, Texas, on June 3-5. The playoff matches will be single-elimination, with the quarter and semi-finals played out as Bo3, and the Grand Final as Bo5.

Fans tuning in online and watching the matches from around the globe can expect an exciting broadcast filled with extra content. The CS:GO competition can be watched on ESL Gaming’s CS:GO Twitch channel, on live.intelextrememasters.com, and will be broadcasted by our dedicated broadcast partners.