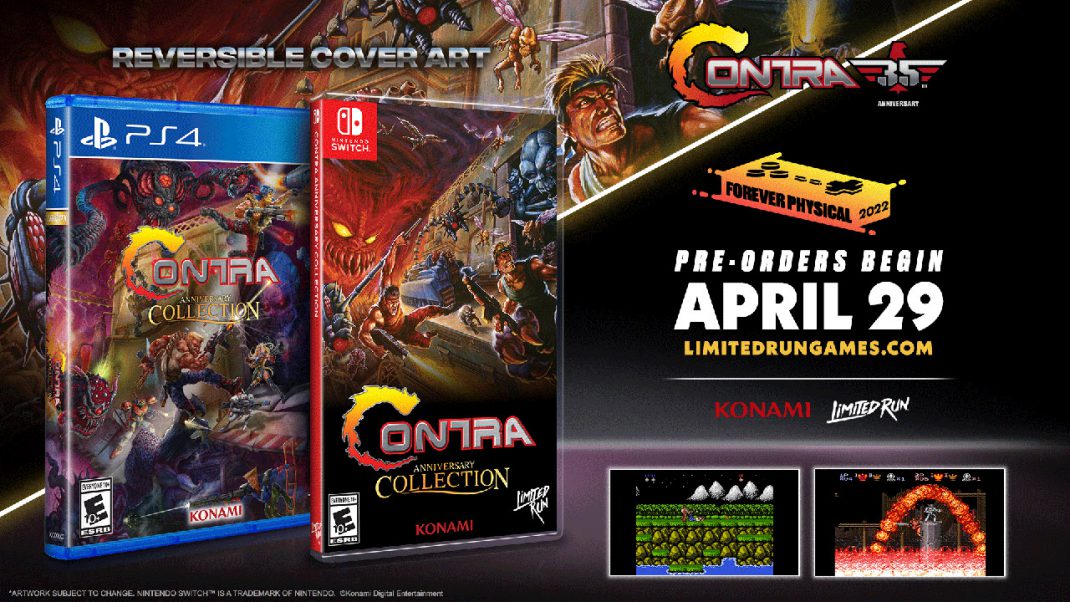 Limited Run Games, pioneers dedicated to the preservation of classic, current, and influential games in the physical format, announced today it has partnered with video game publisher KONAMI to celebrate over 35-years of the beloved and classic Contra franchise with the physical release of the Contra Anniversary Collection, coming soon to Nintendo Switch™ and PlayStation®4. Three Collector’s Editions — the Classic Edition, the Hard Corps Edition, and the Ultimate Edition — will be made available alongside a Standard version of the game. The Contra Anniversary Collection will be available to pre-order for six-weeks, beginning on Apr. 29, 2022 via the official Limited Run Games website.

The three Collector’s Editions will contain a full loadout of extra collectibles worthy of any longtime-Contra fan. These curated versions include retro-style boxes styles modeled after the original NES and Genesis releases, a CD soundtrack, posters and prints, and much more.

“As lifelong gamers and fans, it is an honor and privilege to have the opportunity to work with KONAMI on the Contra Anniversary Collection,” said Josh Fairhurst CEO and Co-founder at Limited Run Games. “For players who grew up during those halcyon days of console gaming in the late ’80s and ’90s, we’ve put together something extra special with this collection, including the original arcade version, Japan-only releases, and all the landmark titles for this legendary franchise from the original Contra that made the ‘Konami code’ famous to more rare releases, like Probotector.”

Limited Run Games is excited to bring this amazing collection of Contra titles to physical formats, which allows a new generation of gamers to experience this beloved franchise in its full glory. In addition, Contra veterans will be happy to replay many of their favorite titles from the ’80s and ’90s and score these exclusive editions.

This special, physical release coincides with the 35th anniversary of the franchise. On February 20, 1987, Bill and Lance blasted into arcades for the first time, and a year later they would liberate living rooms from the evil Red Falcon Organization. Its fast-paced gameplay and infamously brutal difficulty cemented itself as a must-play title and continues to give it a place on lists of the greatest games of all time. The Contra legacy is alive—and dangerous!

About the Contra Anniversary Collection

The Contra Anniversary Collection brings the classic run and gun franchise back to modern platforms. Released as part of KONAMI’s 50th Anniversary Celebration, this collection highlights the Contra franchise’s most definitive releases, from iconic arcade games to the classic console titles that fans have loved for decades.

Grab power-ups and blast your way through waves of menacing enemies and bosses that will put your reaction skills to the test. Included in the game is a digital Bonus Book featuring concept documents and sketches, the official chronology of the franchise, an exclusive interview with a veteran producer of the series, and more!

Alone or with a friend, Contra provides hours of nail-biting action. In a pinch, make sure you know the code!

The following games are included in the Contra Anniversary Collection:

Details for the three Contra Anniversary Collection Edition sets include: