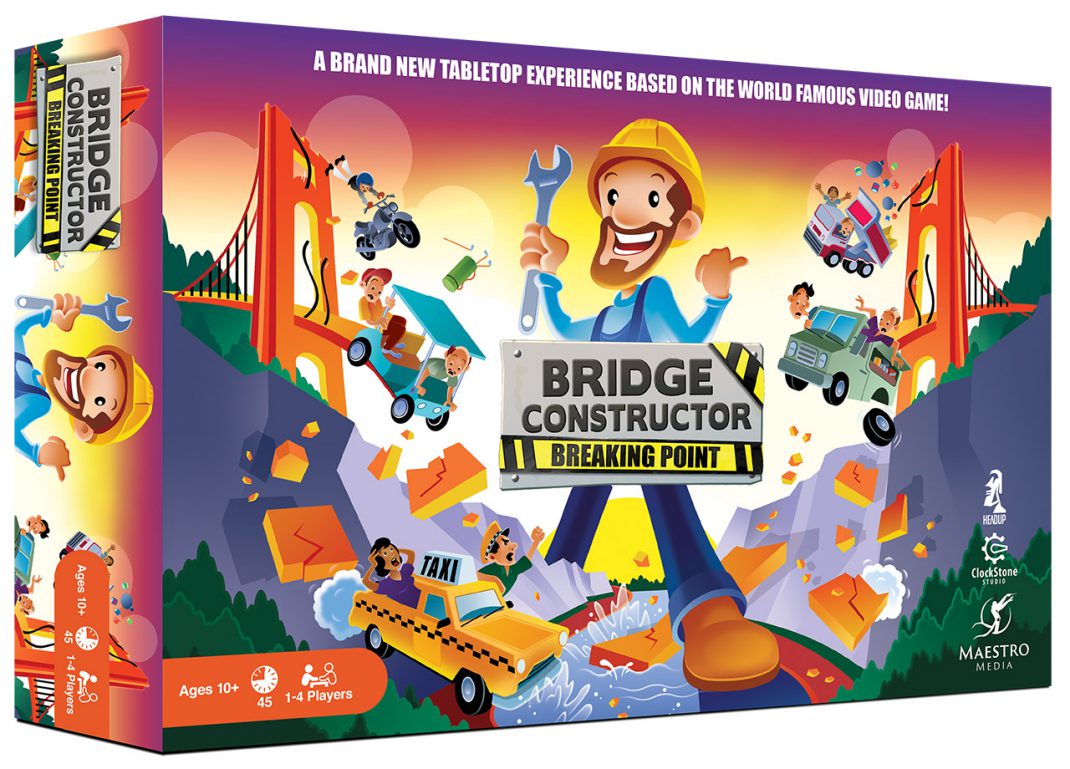 A decade after its initial launch, with over 80 million players worldwide and more discovering and playing the game everyday, the fan-favorite, physics-based puzzle game Bridge Constructor is finally receiving its overdue tabletop adaptation with Bridge Constructor: Breaking Point!

Suitable for ages 10 and up with 2 – 4 players, the heart of the tabletop game remains true to the original’s concept: engineer the best bridge you can with limited supplies and cross vehicles successfully. The gameplay is half puzzle and half press your luck. Each round you have the choice to pick a bridge tile and either continue to strengthen or rebuild your bridge or cross your vehicles. Choose from Super Light, Light, Medium, or Heavy vehicles that each have their unique points and challenges. Watch out for your fellow engineers though, at any time they might play an event card on you, unleashing devastating damage to your perfectly planned bridge. Who’s got the smarts to cross more vehicles and gather the most points before time runs out?

“We’ve partnered with some of the biggest names in the industry to create memorable Bridge Constructor games, such as Bridge Constructor Portal and Bridge Constructor: The Walking Dead, but this is arguably our most ambitious adaptation yet,” said Dieter Schoeller, CEO & Founder of Headup. “Creating a tabletop game from a physics-based video game is no easy feat, but Javon and the team at Maestro Media have shown how incredible such a game can be with Breaking Point and I can’t wait to finally have it out in the world for people to enjoy.”

Bridge Constructor: Breaking Point will launch on Kickstarter this September, with retail and additional distribution plans already in the works.

“With Bridge Constructor being such a creative and inventive concept, there’s endless possibilities for game mechanics and a plethora of other aspects of play, and we wanted to find a way to explore all these areas,” said Javon Frazier, CEO and Founder of Maestro Media. “We’re using Kickstarter as a way to work with the fans of the original game to make the tabletop version the version they want to play and incorporating their ideas into the final product. From our experience, crowdfunding is the perfect method to do just that.”

Fans who sign up and pre-commit early to the campaign will receive two additional exclusive vehicle cards for the game. To learn more about Bridge Constructor: Breaking Point and to sign up for updates, please visit bridgeconstructorgame.com.