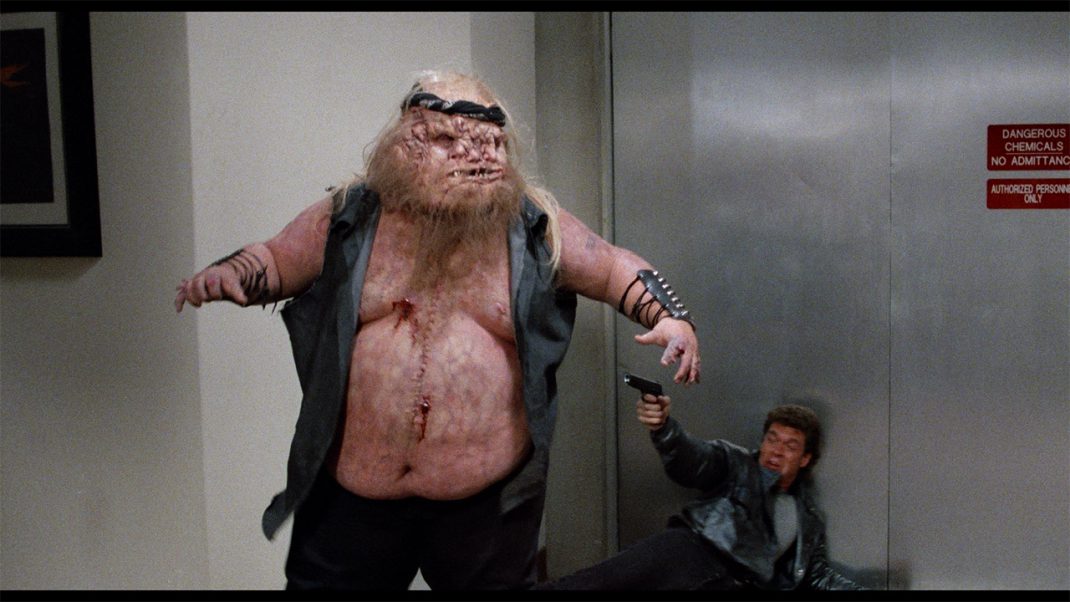 Riggs and Murtaugh. Tango and Cash. Axel Foley and Judge Reinhold. There’s no shortage of classic duos in the buddy cop genre. Go far enough down that list and you’ll find Treat Williams and Joe Piscopo. That’s right, the star of the second through fourth sequels to The Substitute and Mr. Comic, the holodeck comedian that taught Data the true meaning of humor, once teamed up to bless us with Dead Heat, the best (only?) comedy-horror-zombie-cop movie of 1988. Once reserved for late night cable airings and bargain bin video stores, Dead Heat is now available in an all new 4k release courtesy of the mad minds at Vinegar Syndrome. Is this movie worth rising from the grave or should it turn in its badge and gun? Read on and find out.

As a series of smash and grabs target the jewelry stores of the greater Los Angeles area it’s up to detectives Roger Mortis and Doug Bigelow to do what they do best- rack up insurance claims for the city with unnecessary property damage, fire off as many one liners as they do bullets, and constantly remind their chief that he’s too old for this shit. Responding to the latest robbery they find that not only are they up against an organized crime ring, but a seemingly superhuman one to boot as the thieves take shot after shot without going down for anything short of a standard issue hand grenade. Investigating the robberies, Mortis and Bigelow find themselves at a mysterious pharmaceutical company where things go from bad to weird as Mortis finds himself killed and revived in the best sci-fi resurrection chamber the 80s had to offer. When they learn that Mortis has a 12-hour time limit on life they find themselves in a race against time to solve the strangest case of their careers. And I didn’t even mention the undead duck head! 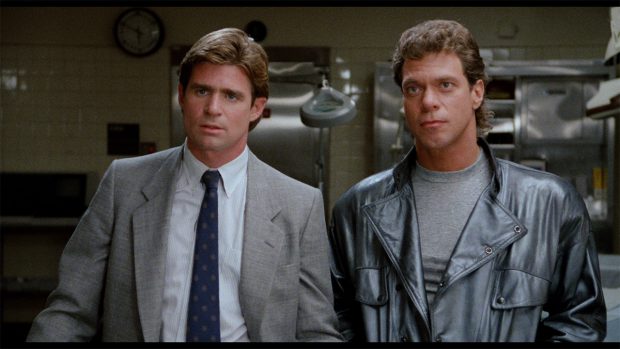 There is so much that shouldn’t work about this movie. The plot- pharmaceutical company conspires with country coroner to test resurrection machine on criminals- is riddled with holes. The dialogue is paper thin with characters either dumping exposition directly in each other’s laps or delivering one liners so terrible Joe Piscopo should have left them behind at SNL. The lighting is flat and the film has the general vibe of a late-night made for basic cable movie of the week.

This movie shouldn’t work, but it does. Treat Williams’ earnest performance grounds the movie in a way that is hard to explain. The makeup and practical effects are absolutely fantastic with everything from a fully resurrected meat locker coming to life to attack our heroes to characters decomposing on screen as their zombie time runs out. And even though it’s full of plot holes the movie is a tight, easy watch owing in large parts to director Mark Goldblatt’s award-winning experience as an editor. On top of all that, Dead Heat features one of Vincent Price’s final performances, giving it an instant air of credibility and a place on your shelf with your other horror classics.

This is not a good movie by most definitions but for all its faults Dead Heat is an easy movie to love.

Dead Heat comes to us with a brand new 4K remaster with HDR10 encoding. The colors are rich with a consistent brightness leveled out with solid blacks. The color space is more vibrant than you’d expect a movie of its ilk to be with warm, natural skin tones across the board and beautiful pops of color in everything from the movie’s titles to the hand painted lightning effects in the resurrection sequences. The 4K upgrade is clean with little to no scratches or dirt remaining from the original negative. Details are clean with a notable call out to the excellent makeup effects. You should not be able to see veins as clearly as you do given that this is a 35 year old staple of video store bargain bins but this transfer is impeccable and looks as though it could have been shot yesterday. 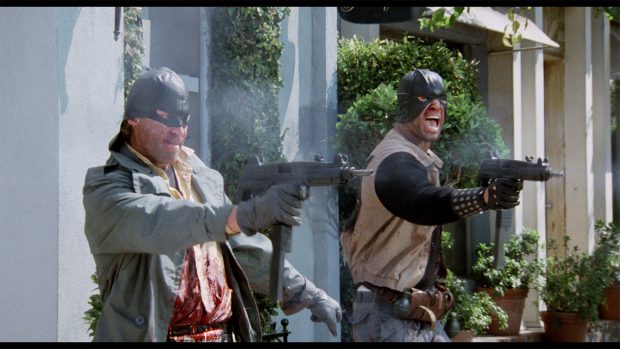 The disc’s 2.0 stereo mix is solid. The sound is well balanced and individual elements in the mix are clear. Gunshots pop, electricity crackles, and dialogue never gets lost. The 2.0 mix did a great job of filling my viewing space and while that’s the only audio option it’s more than enough for a movie that was likely last viewed through a VHS player.

Dead Heat comes packaged with a reversible sleeve featuring all new artwork as well as the original poster art from its first release. It’s also available in a limited run with a beautiful embossed sleeve as is the usual with new Vinegar Syndrome releases. The case holds two region free discs with the film and audio commentary on one 4K disc and the film, commentary, and the rest of the extras on a separate Blu-ray Disc.

The common element that jumps out to me most in the commentary and interviews is the amount of joy everyone involved had in making this film. On the commentary you get a real feel of camaraderie as Goldblatt and company have fun reuniting and reminiscing about the film and in the interviews you’ll find key players who still get excited to talk about the work they did on this underappreciated gem. These are all people who would continue to have impactful careers in Hollywood that happened to come together to produce a truly weird movie and you get a real sense of nostalgia as they share their stories. Add to these featurettes the standard archival trailers, still galleries, and deleted scenes and you have a comprehensive look at a video store gem.

Dead Heat is, in a word, bonkers. It’s the exact kind of 80’s schlock that Vinegar Syndrome excels at digging up and unleashing on the world. It’s the kind of film that was clearly fun to make by a group of people who cared in the right ways, didn’t care in the best ways, all adding up to a film that transcends “so bad its good” irony and becomes a really enjoyable time on your couch. Add to that an impeccable transfer and robust set of extras and it becomes a disc that is highly recommended. 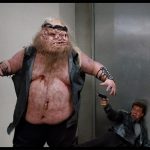