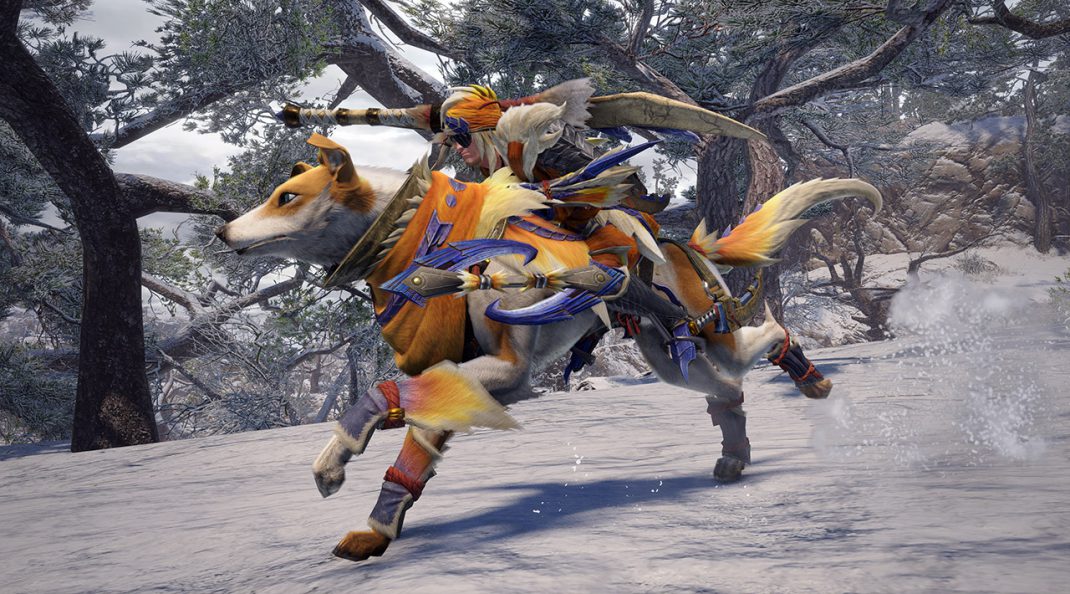 Monster Hunter Rise is the latest installment in the action RPG series and transports players to Kamura Village, a colorful and tranquil setting that attracts visitors with its unique culture and innovative hunting technologies. The core gameplay experience in Monster Hunter Rise stays true to the highly-praised previous Monster Hunter entries, where hunters must equip their armor and select from one of the 14 different weapon types. As players defeat monsters and progress through the game, items carved from fallen foes can be used to craft unique weapons and armor that will increase their chances of future success and survival. Hunters can tackle these challenges solo, or with up to three other hunters in cooperative local or online play.

Monster Hunter Rise evolves the series by introducing several new and exciting mechanics for hunters to master. For the first time in a Monster Hunter game, wire-based grappling actions can be performed by using a “Wirebug” while standing or in mid-air, adding an all-new level of aerial maneuverability to hunting strategies and attacks. Additionally, the game debuts the “Wyvern Riding” technique, which allows players to temporarily take control of a monster and yields spectacular battle sequences during a hunt. Monster Hunter Rise also introduces new hunting partners called Palamutes, personalized and rideable “Canyne” companions that will provide players with a new set of attack options. The “Canyne” Palamute companions join the series favorite “Felyne” Palicoes in assisting players while out on a hunt.

At launch, the full version of Monster Hunter Rise on PC will include all major post-launch content that is available in the Nintendo Switch version through the end of November 2021. More information about future content and timing will be available at a later date. The PC version will feature customizable optimizations, allowing hunters to enjoy their journey in 4K resolution and with ultrawide (21:9 aspect ratio) support, while also offering uncapped framerates and high-resolution textures. Monster Hunter Rise on PC will be available on Steam for MSRP $59.99 on January 12, 2022 and is available now for pre-purchase. The game is currently available on Nintendo Switch for MSRP $59.99.

A demo for Monster Hunter Rise on PC will launch on October 13, giving hunters ample time to enjoy a sampling of this new Monster Hunter experience before the full game releases on Steam. The PC demo provides players with numerous hunting options, including offline solo and online multiplayer (up to 4 players) using all 14 weapon types. For new hunters, the PC demo will provide a “Training” option and a “Wyvern Riding” tutorial, each offering useful tips and instructions. When hunters are ready, three different hunting quests and monsters are available to experience, each providing distinct levels of challenge from Beginner (Great Izuchi) to Intermediate (Mizutsune) and Advanced (Magnamalo).

The identity of the eerie new monster featured in the debut trailer for Monster Hunter Rise: Sunbreak has been confirmed as Malzeno, a fierce elder dragon who will serve as the expansion’s flagship monster. Also joining the upcoming expansion, Shogun Ceanataur is a returning crab-like monster who first appeared in Monster Hunter 2.

For current Monster Hunter Rise players, a haunting new Capcom Collab was also announced today and will feature the brave knight Arthur from Ghosts ‘n Goblins: Resurrection™. After completing a challenging Event Quest, players can don Arthur’s iconic armor and the hunter’s throwing knives transform into lances, the classic weapon from the legendary series. Music from the recently-released Ghosts n’ Goblins: Resurrection will provide a backdrop to the heroic hunting action, and when a quest is completed as Arthur, a special cutscene will be bestowed upon its victors. This special collaboration quest will be available for Switch players beginning on October 28.

Finally, and also first revealed today, Monster Hunter is teaming up with SEGA to celebrate Sonic’s 30th anniversary in Monster Hunter Rise. More details on this exciting new collaboration will be shared soon, prior to the Event Quest’s release in November.