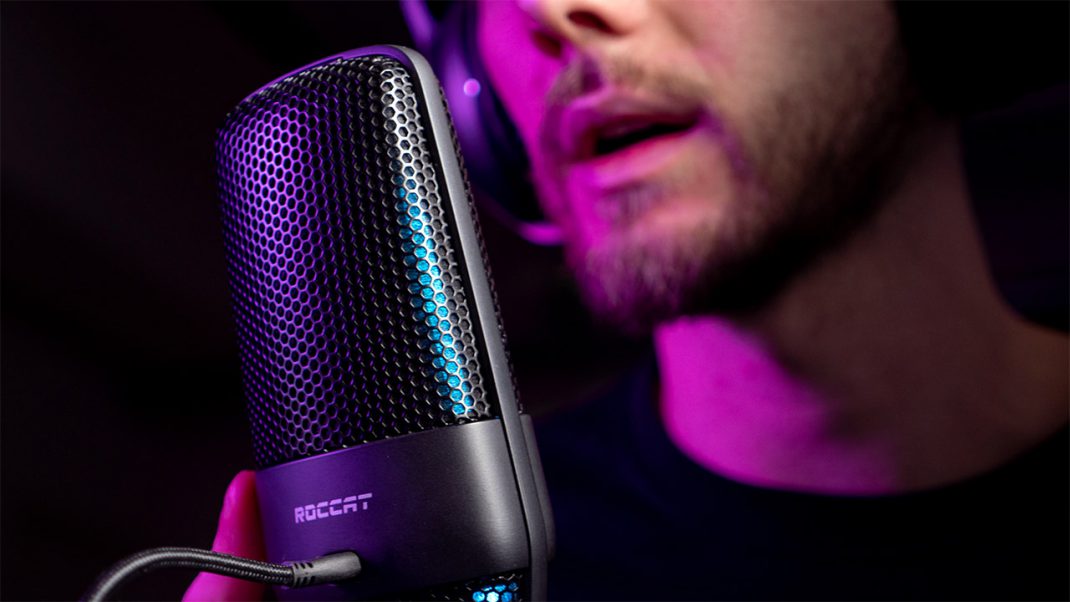 The creator microphone market is packed with options for those people out there making content. In fact, the technology out there can get fairly high-end and complicated based on what your neeeds are and where your content is distributed and made for. Finding a microphone that is easy to use, feature-packed, and a good value in terms of money is important. Enter: The ROCCAT Torch USB Microphone.

The ROCCAT Torch has some great features going for it and, amazingly, it is ROCCAT’s first microphone of this type! While not necessarily important to every type of creator, the look of the equipment that they use can be a consideration – especially if their workstation and setup are on video. In the looks department, the ROCCAT Torch USB Microphone has a very high cool-factor. It’s actually two different units – the microphone and the base station. The microphone is plastic and metal, has a cool style and light weight, and features a 3/8 inch mounting screw input on its bottom side.

The base station is mostly plastic but features all of the microphone’s controls. The ROCCAT Torch’s lighting effects are present but not overpowering, and actually serve an informational function for the user (you can adjust the brightness of these LEDs as well). The color of the light bars on each side of the microphone tell the user what pick up pattern the Torch is set to. In addition, these side lights move farther up the microphone depending on the level of gain selected on the base station.

When set to stereo pick up, the light is purple. In this pick up pattern, the Torch is listening to sounds coming in both sides of the microphone. This is great for recording conversations with multiple people in the same space, or whenever multiple audio sources need to be recorded at once. When the caridoid patten is selected, the Torch is listening to sounds mostly in front of the microphone – this is a great pattern for recording one speaker. The light turns blue when the whisper patten is selected. This is a really cool mode as it works similar to the cardioid mode but it automatically boosts the gain to listen for low-volume audio sources – like a game streamer who is streaming late at night and can’t be too loud. Even cooler in this mode is that the gain with adjust itself depending on how loud the speaker gets. If the person streaming is whispering then begins yelling in excitement because they did something cool in the game they’re playing, the whisper mode will decrease the gain in turn. 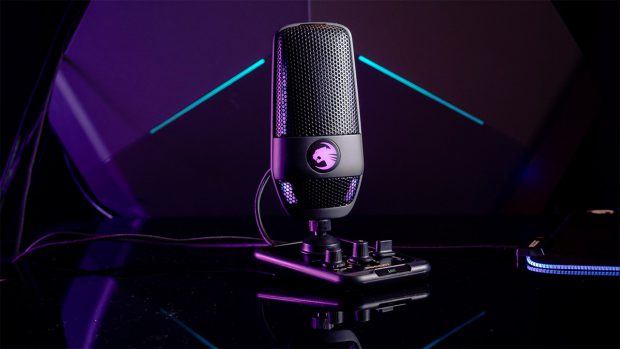 Another awesome feature of the ROCCAT Torch is that it has its own built-in pop filter. This is so handy as, despite giving your setup a professional look, those filters can be a little cumbersome in practice. The ROCCAT Torch’s base station is where all the controls of the microphone are located. There you’ll find a knob which controls the previously-mentioned pick up pattern selection – but, you’ll also find a gain slider. Finally, you’ll find a second knob which controls the volume of the sound being sent out to the headphone monitor port on the back of the base station. Pressing that button in will also toggle mute. In order to mute the microphone you can also wave your hand over the microphone head itself. A very interesting feature, this allows you to mute the mic without hitting any physical button – thus, eliminating the sound of any button being pressed. However, this no-touch feature is finicky at times and would not always register the wave of our hand of the microphone.

When recording, the Torch has a lit-up “LIVE” light on the front of the base station that does not display when not recording. The base station also features a ball/screw mount for the microphone to attach to and the two units communicate by way of a short USB-C to USB-C cable included in the box. If you would like to separate the two units and have the microphone on, say, an articulating desk mount, ROCCAT was smart and included a much longer USB-C to USB-C cable in the box. Speaking of cables – every cable in the box is of the braided variety for flexibility and durability. 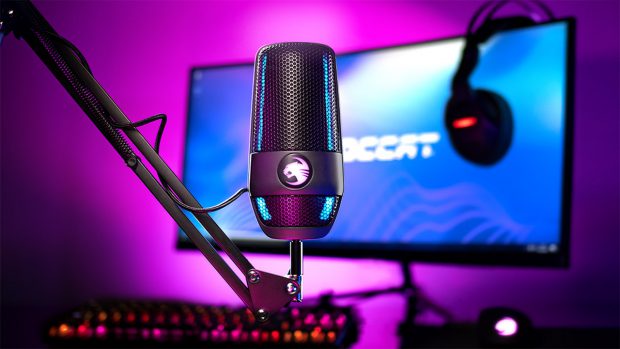 Connecting the ROCCAT Torch to your computer is very easy, as it connects via an included USB cable. Setting it up takes next to no time as you pretty much set its levels to maximum in the Windows sound settings, then use the onboard controls and any creator software to control the microphone. ROCCAT does have a piece of software on their website called ROCCAT Neon. However, it’s not really worth downloading for the ROCCAT Torch as it just allows you to change the color of the logo on the microphone – not the color of the side LEDs. If they updated the software to be able to change the mode setting light scheme – that would be very cool!

The ROCCAT Torch USB Microphone is available now and is loaded with great, easy to use features at a competitive price point. It retails for $99.99 and I can’t recommend it enough for people looking to make recording audio for their game stream sessions, podcasts, video conferencing calls, etc. It’s not a super high-end microphone, but it’s an outstanding choice at its price point. 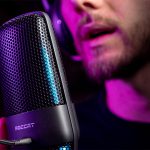