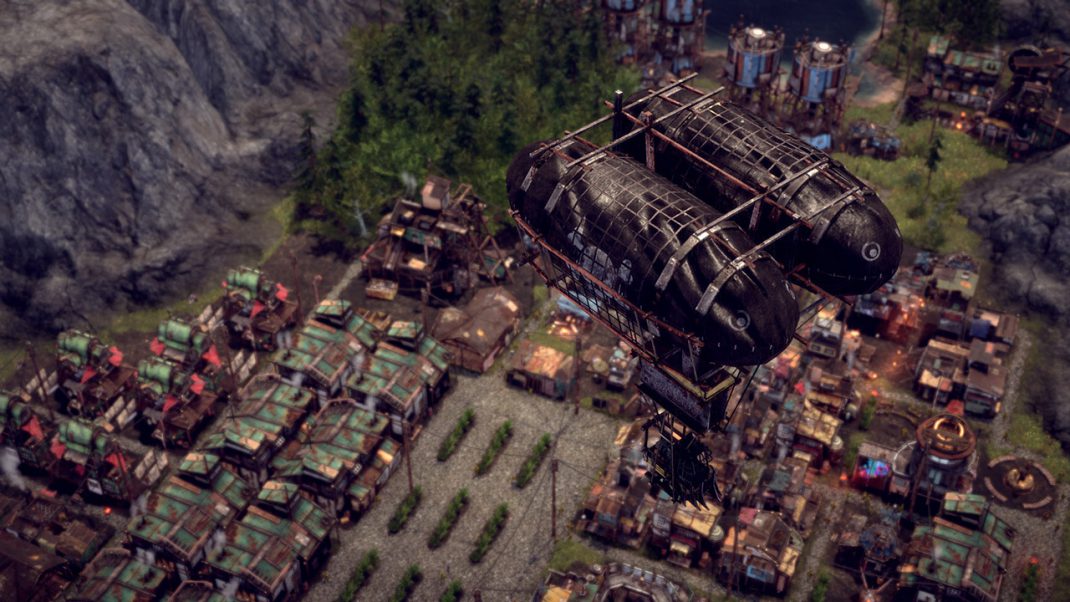 Endzone is a city simulator set over a hundred years after a nuclear apocalypse wiped out the population on the surface of the planet leaving only those who took shelter in time. As they rise up to become the new surface dwellers the settlers have to contend with everything from drought to nuclear radiation until eventually what you have looks good enough that other surface dwellers who have not been as successful decide the best way to keep surviving is to take what you have. At this point those attackers are all AI because Endzone is a single player game.

The depth of this game become really obvious in the tutorial that takes hours to complete on its own and that is with most of the environmental issues held back while you get your groove. You start it with a single spot and a helpful narrator giving you different tasks to complete to familiarize yourself with the different menus and options of the game. The game allows for pause, fast forward, and faster forward in case the natural time of the tasks start taking too long. If you are on the verge of taking some mighty bad event, being able to pause the game and consider your options is always a handy thing. You can also save whenever which I always appreciate in a game. 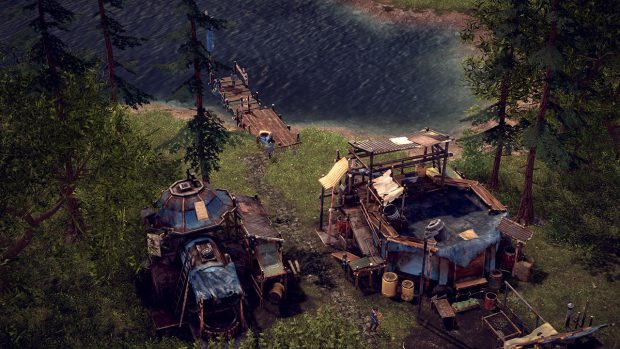 The theming of the game is really one of its biggest draws, I have been playing city sims and base builders since the very first ones came out and the depth and uniqueness of this game is really impressive. It would have been easy for them to create a bunch of building setups from other building games and just change the theme but the developers put much more care into the end product. The menus all feel fairly unique, the buildings fit the deadly circumstances but also upgrade in interesting ways that usually involve assigning a settler to a certain profession permanently. As a result one of your most finite resources are your settlers. You can even find yourself adding and then removing settlers from different tasks to handle the current most important thing which hopefully will payout in a few more settlers.

The game isn’t just about building though. Those settlers that make everything happen also need to be kept happy which is a pretty hard to accomplish while trying to struggle by. You need to improve housing conditions from the beginning and as your society develops the workers need something to keep them happy like pubs and campfires to hang around but also places like forums and cemeteries to handle the harder parts of life and death in a contaminated world. Due to said contamination you also need to get a good hospital and cemetery built, your settlers will thank you for it.

The gameplay can be pretty much whatever you decide for it to be, you can dive into deep menus researching all kinds of things while struggling with drought, radiation and raiders or you can set the game to a no-pressure building setup so you can pass the time seeing just what you can build when you don’t have to worry too much about the environment as just a couple of examples from the different end of choices. The main menus consist of tutorials, survivals and scenarios. The tutorials and scenarios are pretty self-explanatory and survivals mean everything from difficulty level to particular challenges like “no trees”. This game has massive replayability where you can even go and random roll a map’s build. 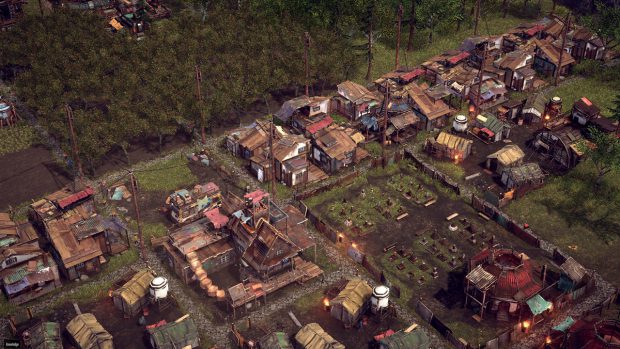 The game’s graphics are really nice and look like what a bunch of survivors would hobble together using what is available to them. You can zoom down to nearly street level and see what the buildings look like with all their detail before swinging out to a wide map that allows you to check radiation, drought, happy settlers, electricity, building damage and what’s being built as a colored map layovers showing the highs and lows throughout the map. Keeping any eye on these is a great way to catch trouble before it gets alerted to by the game.

A funny thing happened while I was reviewing this game, I was in a room packed with people watching a NHL hockey game all totally pumped up and a couple asked what music I was playing and said they liked it playing in the background while we watched the game! So that gives more than a thumbs up, more like a few of them in support of the terrific original soundtrack for the game. I actually have the game playing in the background while I am posting this review so that I can continue to enjoy the music while writing.

Endzone – A World Apart is a great city building, survival strategy game that can cause more settlers to die than a few plays of The Oregon Trail but in a far more exciting and in-depth way. The game can be brutally hard to survive or require lots of building or just a mellow building fest with nice music and your choices on what you feel a post-apocalyptic world should be if given the time and inclination to design.