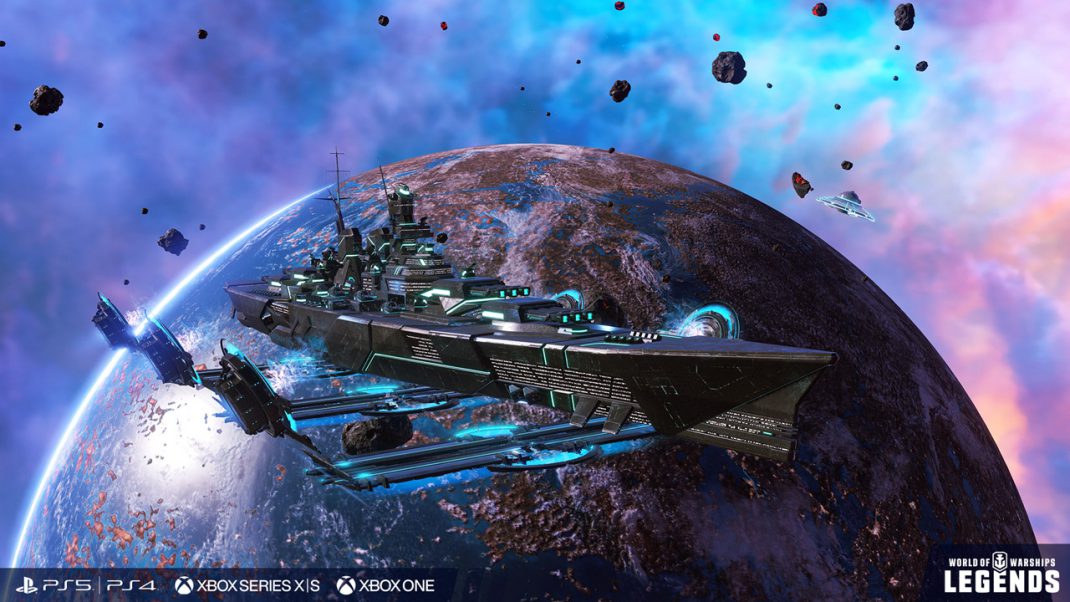 The April Fool’s event begins next week in World of Warships: Legends, bringing captains to space for the first time in the Stellar Clash gamemode. It’ll be a chaotic free-for-all on the edge of the known galaxy, defending against the Invaders.

Starting March 22 players will get to take command of three spaceships to defend the stars: The mighty battleship Alldestroyer, multi-purpose cruiser Galaxy, and the high-speed destroyer Rover. Three commanders are lined up to helm these spaceships: John Luke Pickup for the Alldestroyer, Shelly Beapley for the Galaxy, and Space Fishy for the Rover. Their fully-upgraded skills and abilities will be vital to winning in Stellar Clash, captains should pick their skills carefully!

Each battle will consist of nine players plus a swarm of Invaders vying for control of the system. As a solo captain, players will have to become the last ship standing, or take control of the capture circle to win. There are plenty of boosts available to grab throughout the map to help improve your ship as well, ranging from heals to better reload time. Each match will challenge captain’s skills in dealing with multiple enemies and situations, pushing them to adapt to an ever-changing battlefield.

Battling the Invaders will net players “Stellar Chips,” which can be used to unlock all kinds of permanent space skins for many different ships, as well as getting the aforementioned event commanders for your regular seagoing fleet! There are a bunch of Stellar Clash themed skins and items awaiting, but also the rare premium destroyer Yukikaze for intrepid captains who earn enough Chips to command her.

Get a taste of space battles before April 12!

It’s going to be a wild ride for April Fool’s in World of Warships: Legends, so strap in and prepare to turn the tide!