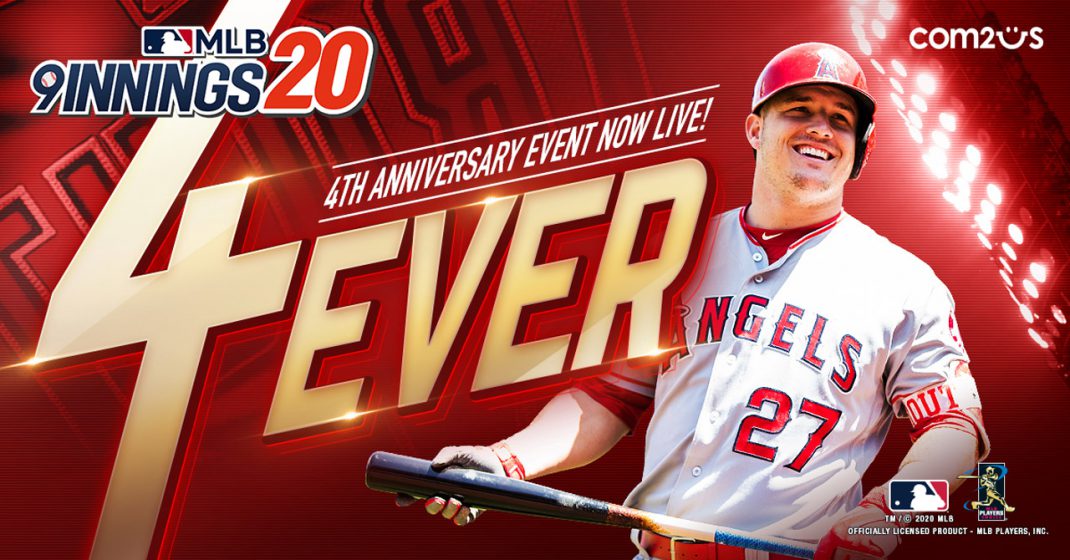 It’s a four-bagger as leading mobile game developer Com2uS marks the four-year anniversary for hit mobile game MLB 9 INNINGS 20 with special in-game events and giveaways. Celebrating four years of home runs and double plays, the MLB 9 INNINGS series launched globally with an official MLB license in 2016 and has maintained a massive fanbase ever since.

All baseball fans who access the game before Saturday, Oct. 31 will receive a “Free 4th Anniversary Package” consisting of various popular items. Com2uS is also holding a major league event during this period in which users can earn a slew of generous rewards and prizes to help stack up their teams.

Fans can collect “Four Year Coins” by playing various game modes, which they can use to exchange for up to 50 Premium Player Packs to get high-end players from Silver to Diamond grade at “MAX” stats. Depending on the cumulative results, players will be awarded special game prizes such as the Player Upgrade Ticket, considered the most popular and useful item in MLB 9 INNINGS 20.

In addition, MLB 9 INNINGS 20 introduced a new “Mentor System” that can upgrade players according to the user’s own specific strategy. Users can register player cards that match a mentor’s stat requirements to increase their own player’s stats in that category, making them a stronger addition to the team.

Additional updates as part of the MLB 9 INNINGS 20 Fourth Anniversary celebration include:

MLB 9 INNINGS has a full license agreement with Major League Baseball, and offers the most up-to-date MLB experience on mobile devices. The game has received steady love in the U.S. and many other countries since its release, and has recorded top 10 and accumulated 40 million downloads in sports games in Google Play (83 countries) and Apple App Store (57 countries).

Major League Baseball trademarks and copyrights are used with permission of Major League Baseball. Visit MLB.com. Officially Licensed Product of MLB Players, Inc. MLBPA trademarks, copyrighted works and other intellectual property rights are owned and/or held by MLBPA and may not be used without the written consent of MLBPA or MLB Players, Inc. Visit MLBPLAYERS.com, the Players Choice on the web.