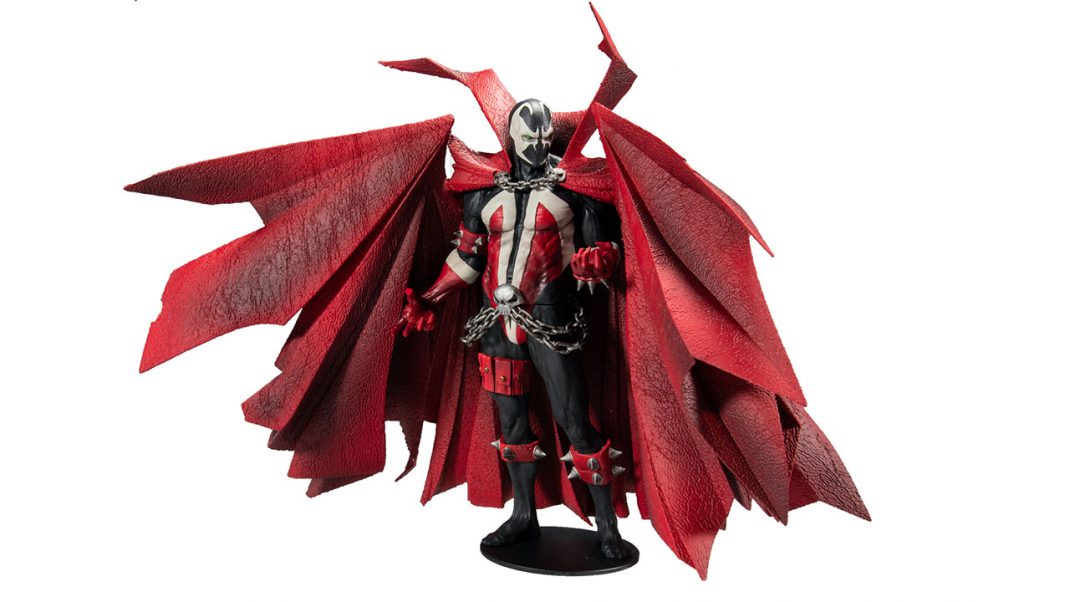 Tempe, Ariz., –April 8, 2020 — In 1992, the very first Spawn comic book hit the shelves setting a sales record for an independent comic book. A few years later, in 1995, the first Spawn action figure was released to critical acclaim and helped usher in a whole new way of giving you detail and ‘art’ to your action figures.

Now, twenty-five years later, Todd McFarlane is joining forces with Kickstarter to deliver an updated version of that original 1995 Spawn Action Figure and Comic release. The new Original Spawn Action Figure and Comic Remastered (2020) figure will be 7-inches tall and come with a huge folding cape and weapon. The articulation in this version will be more than double what the original action figure had, and the included comic cover will be remastered by the international award-winning artist and creator of the Spawn character, Todd McFarlane.

“We’re thrilled that Todd McFarlane Productions is bringing Spawn to Kickstarter. When McFarlane launched his first line of toys in 1995, he showed that creative independence is a key ingredient in doing something innovative and new within an established and sometimes stagnant industry,” said Nick Yulman, Kickstarter’s Head of Design & Technology. “We’re creating this new section for Toys on Kickstarter to celebrate the launch of this project and to inspire more independent toy designers to follow their visions.”

“As an artist and a creator, I have worked to evolve my creations to the highest artistic level achievable. I’m going back to the beginning of the first Spawn Action Figure and Comic I ever created. It will be remastered and modernized with all the skill sets, details, and technology that I have learned over the past 26 years to bring you the best version of that iconic Spawn Action Figure and Comic from 1995,” said Todd McFarlane, Spawn creator and legendary artist. “It’s an honor that Kickstarter is creating a new toy section on its platform and debuting it in conjunction with the first-ever Spawn Kickstarter.”

This newly remastered Original Spawn Action Figure and Comic (2020) version will come in a collector box with a slipcover to help preserve the condition of the figure, comic, and packaging. And speaking of the actual blister packaging, it will mimic the original design from the classic action figure of 1995, though upgrades will be all across the final product.

A new resealable shell will be used so that you may take out your Spawn Action Figure and Comic for display, but also be able to return them both into their packaging as you have never opened it in the first place!

Finally, if you choose, you can get an autograph by Todd McFarlane himself. Todd will be personally signing a nameplate that can be used for display with your Spawn Action Figure and Comic. And each autographed item will also come with a bonus weapon: A reimagining, hyper-detailed updated version of the wooden plank weapon from that original Spawn Action Figure from 1995.

To simplify this offering, there will be only four levels: A CLASSIC costume version. A MODERN costume version (with new head), an ARTIST PROOF (what we’re calling the ‘black & white), and lastly, the 3-PACK bundle which will include a Classic, Modern and Black & White figure. The latter two figures are getting new head sculpt! The first three levels will be offered with or without an autograph while the 3-Pack will only be offered with an autograph. And each of the single figures will have a NEW never-seen-before cover remastered by Todd McFarlane himself. The backing levels range from $40 to $160 based on the offerings.

This is your chance to get in on history as it repeats itself in this remastered version of the action figure and Comic that helped changed the industry of action figures itself. For additional, information visit the FAQ on the Spawn Kickstarter page. To stay updated on the Spawn Kickstarter Campaign Follow Instagram: @ToddMcFarlane, Twitter @Todd_McFarlane and FB @LikeToddMcFarlane

Description of Product: Original comic book with remastered cover art by Todd McFarlane and a Spawn 7-inch action figure with folding cape, weapon(s), base, and over 20 moving parts. Resealable clamshell and a collector box and slipcover for protection and display. There are four different offerings and some levels will include the option of getting a hand-signed autograph from award-winning artist and creator of SPAWN, Todd McFarlane.