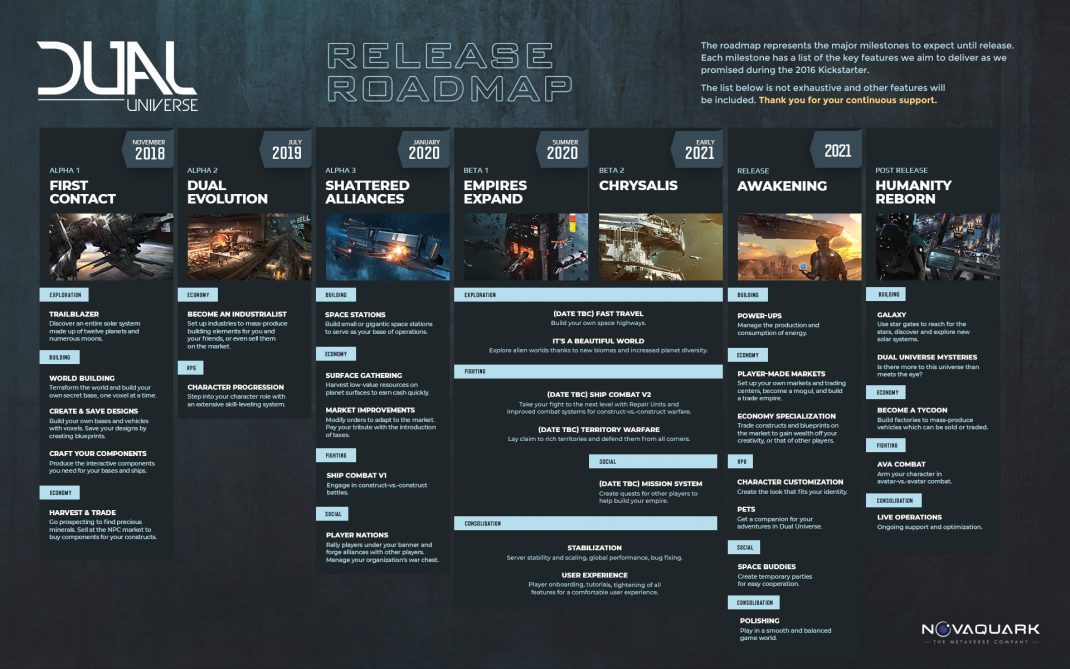 Montreal, Canada – December 5, 2019 — Novaquark, developers of the upcoming sci-fi MMO ‘Dual Universe’, have released an updated roadmap to the public that highlights the next phases of their development cycle. Also released was an accompanying podcast in which the company’s CEO Jean-Christophe Baillie and staff sit down to discuss the future of the game in more detail.

Starting with the upcoming Alpha 3 update, which is slated for a January 2020 release date, the roadmap highlights some of the new and updated features coming to Dual Universe in 2020 and 2021, as well as the key milestones in the game’s development.

The fundamental gameplay tenets of Dual Universe can be broken down into six main pillars: exploration, building, economy, RPG, PvP combat, and social. With the upcoming Alpha 3 update, Novaquark will have added the latter two, thus completing the foundations for the core gameplay of Dual Universe. With Alpha 3 in player hands, Novaquark plans to focus the bulk of their attention on stabilization and polishing the user experience. “As we’re heading toward Beta, 2020 will be a critical year for us. We have to focus our priorities on making sure the gamer’s experience is as smooth as possible,” said Baillie. Among the new changes coming in January’s highly-anticipated Alpha 3 release, dubbed ‘Shattered Alliances’, are Construct-vs.-Construct PvP and introduction of player organizations, along with a host of other additional features such as surface ore gathering. While Avatar-vs.-Avatar PvP is set to be released in a later update, the team decided to focus on construct combat due to its innovation in regard to real-time voxel damage and crew-based emergent gameplay.

In a recent video, Baillie spoke candidly about the changes to the roadmap, as well as about the progress Novaquark has made so far. In 2019 alone, they released Alpha 2, a major update for Dual Universe, conducted an unprecedented 30,000 simulated player test, raised $11.2 million in additional funding, and opened up a brand new studio in Montreal. In order to continue that trend into 2020, the company felt it was imperative to update their roadmap. “We keep trying to set ourselves apart by how transparent we’ve been, and continue to be, with our core audience of players,” Baillie said.

As of right now, Dual Universe is in Alpha 2, with Alpha 3 coming in January 2020 and the first Beta expected to be released in Summer 2020. To view the updated roadmap, as well as the accompanying podcast and interview video featuring Jean-Christophe Baillie, click here. Also, be sure to get the latest Dual Universe news by checking out their official website, and following the game on Twitter, Facebook, Discord, Reddit, and YouTube.