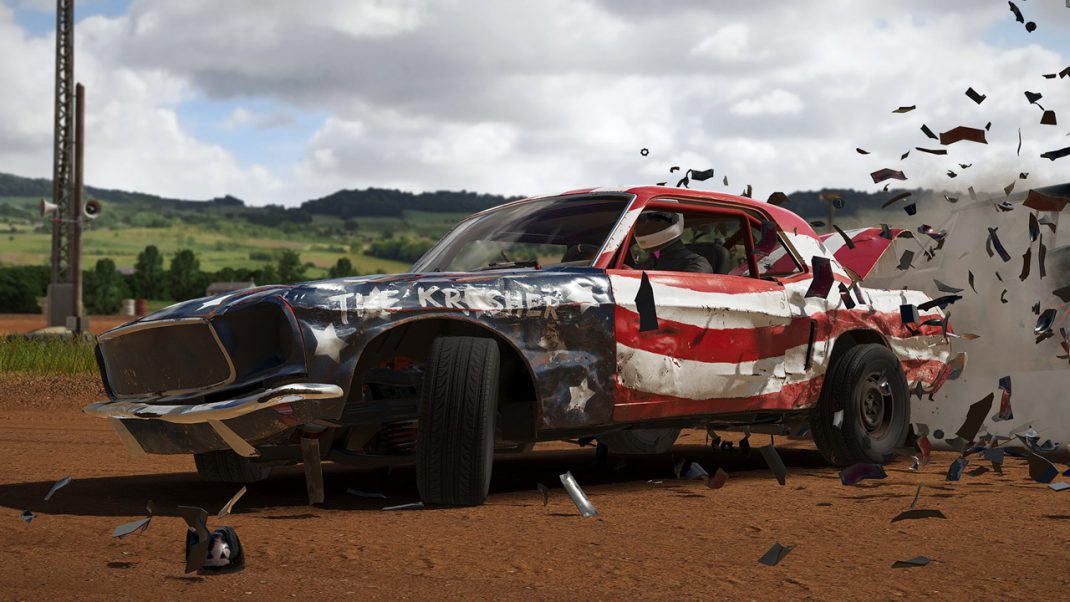 It’s always kind of a bummer when you don’t see total destruction damage when getting into massive collisions in racing games. When damage is minimal from a crash that should’ve maimed both drivers, it takes some of the realism out of a generic racing title. This is why I’ve always gravitated towards more objective or power-up style racing like Wipeout, Mario Kart, and the like. However, ever since Destruction Derby back in the 90s, I’ve always loved some demolition derby games and Wreckfest definitely hits most of the marks.

Focusing on the career mode, there are various styles of races to choose from as you work your way up from the Juniors across the multiple unlockable leagues as you complete the point-limit for each one. Within each league are the races which range from demolition racing around an oval track, figure-8s, and many other variations as well as wide open arenas, there’s also riding lawn mower demolition derby, school bus races, pure survival, and many others. The variety of each league and their stages, all stages of which are unlockable as you progress within each league and though it’s easy to unlock all of them, you don’t necessarily have to compete in every single race of each league in order to progress to the next level, you just need to score enough points within each race all of which contain their own bonus objectives like spinning cars three times or causing a certain amount of damage to other racers. 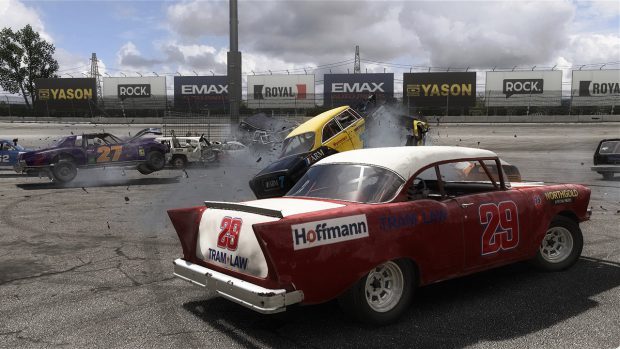 The driving and action is fantastic with a real feel for speed in some of those long stretches where you know you’re going to have to use that E-brake at the next turn. The crashes are great looking and with up to 24 vehicles racing at a time, things can look incredibly visceral on some of those massive crashes on the more intense tracks. It definitely kept me interested with how great everything kept up, especially for the amount of action going on the screen with dozen car pile-ups occurring. It’s easy to translate the bonus you may receive along the way for wrecking other cars, hitting them in specific ways, or getting caught up with a “Rival Driver” which includes bonus points if you focus damage on them during the course of the race.

There’s a good amount of vehicles to unlock and choose from within the store, each with their own car class ranging from C, which is the class of the vehicle you start your career with, to B, and of course A which are the highest styles and strengths to purchase from the prize money you receive, each race. Each vehicle also has its own internal upgrades to purchase including engine and exhaust, wheels and armor, just to name a few. Though all custom paint styling to every vehicle you purchase is free, unfortunately the paint style choices, though fully customizable as far as whatever colors you want the art to be, are incredibly limited, usually only to about four or five different styles per vehicle. Along with that, there’s no customizing spray paint or words on your vehicle, nor can you assign your own number! That’s right, you’re locked into the number each art style comes with, along with spray painted words on the vehicle which aren’t in any way moveable or changeable, aside from what color they are. I’ve played demolition derby games years or even decades old where everything on the demo cars are customizable since that’s one of the fun things about real demolition derby is the custom spray paint jobs the drivers and crew take to their vehicles. It was definitely a let down not being able to have full control of what my vehicles looked like aside from a few preset selections. 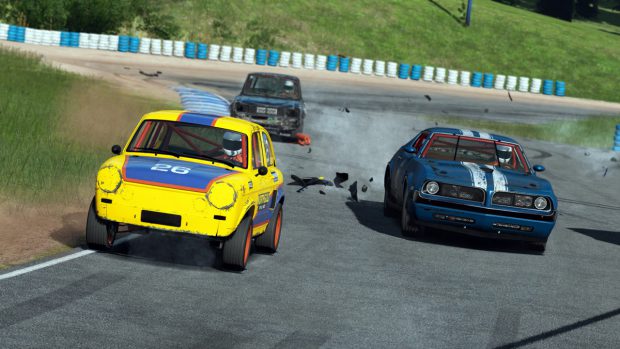 One big problem in between matches is the load times. Loading up a course can sometimes take minutes of sitting there, watching a loading screen. A friend of mine who purchased the game recently mentioned the same issue so I know it wasn’t just something I was experiencing alone. As well, if the race involves a series of races where you need to finish within the top 8 to continue on, the loading in between races is so long and with no on-screen visual to inform you it’s loading, it literally seems as if the game has froze and you’re waiting for your system to blue-screen. I even went to the main PS4 menu the first time this happened and shut down Wreckfest thinking the game had locked up and I wanted to prevent my system from crashing entirely (just in case).

You really need to be conservative with in-game prize winning from races when spending it in the store. Don’t dump all your money into your starting vehicle (or a single vehicle) because you’ll need higher class cars (B and A classes) in order to access future races as you progress through the leagues. As each stages are previously locked, you cant see what each race needs as far as prerequisites and you could find yourself stuck behind races you cant race because you don’t have the cash to buy a new vehicle. A linked problem with that is you can only have one career mode going at a time so it auto-saves and instantly loads you back in each time you select career mode. The problem there is that for as long as I searched, I could not find a way to start a new career, even if it meant overriding the one I was currently in. The only way to start a new career is to manually go into your PS4 settings and delete the career save file. Until it gets patched, there’s currently no other way to start a new career. 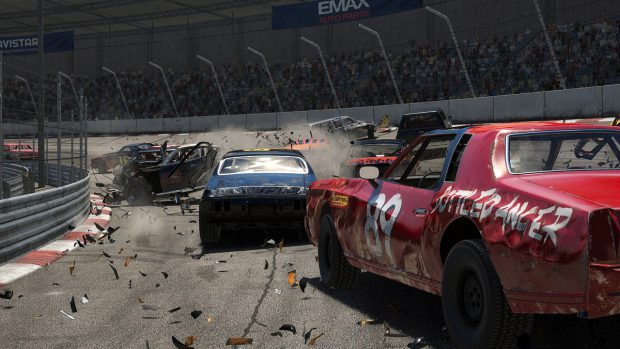 The music is great. It definitely had a ring of modern day nu-metal which I felt was totally suitable for a game like this.  Still, no mention of the artists or their tracks playing was disappointing. As always, I will say every sports game, especially one involving a league where you’re going to put multiple hours into it, should have a TON more songs as well as easy ways to skip tracks. The EA FIFA series has always been great about their music and I’ve always used them as a great example of how lots of music choices and easy selection can make a game that much better.

Aside from it’s short-falls, Wreckfest is a lot of fun and if you’re a demolition derby racing fan, you will absolutely enjoy your time with this game. If there’s a sequel, I would definitely like to see a ton more custom paint options for every vehicle and an easier way to get around the leagues so you know what you have to prepare for within the game, financially. Still, I’ve enjoyed my time so far with Wreckfest. 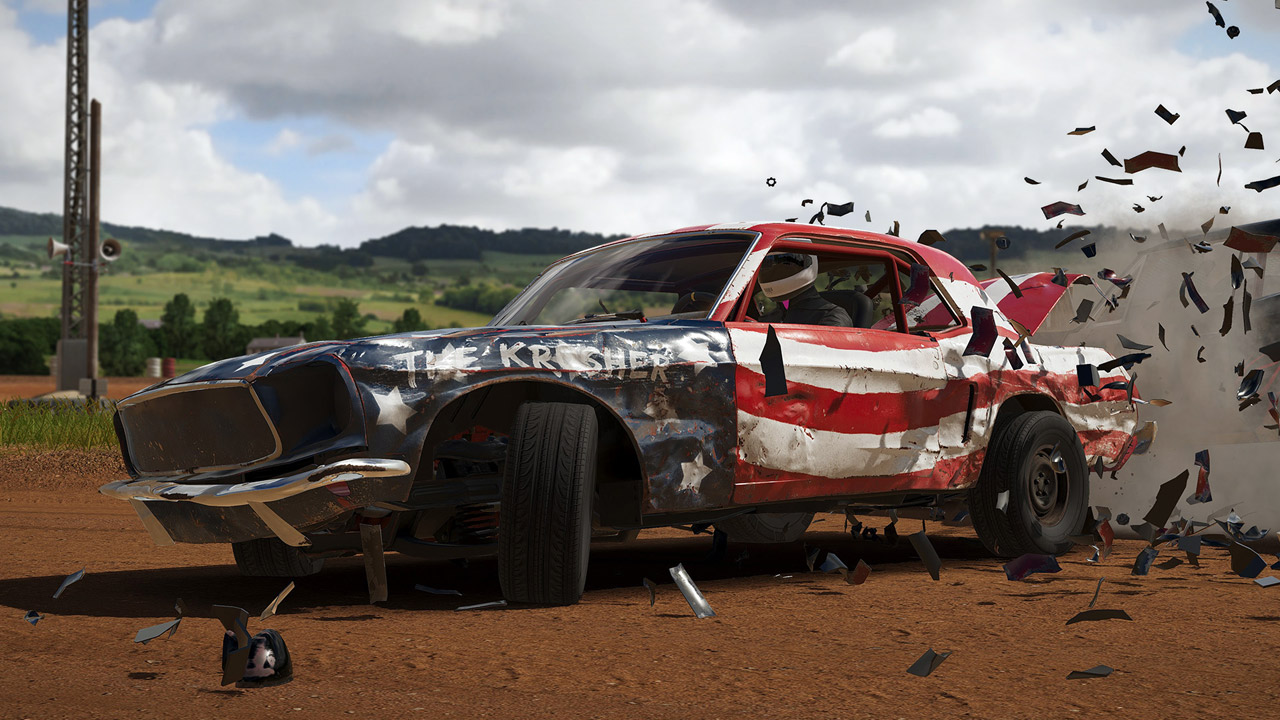