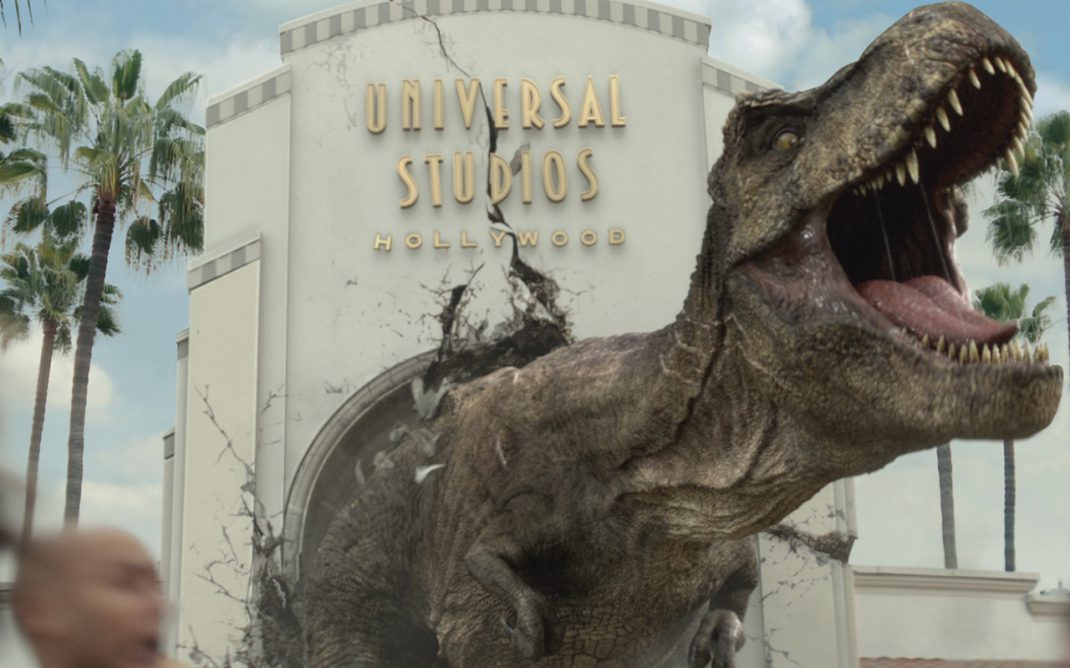 This marks the first time the cast will appear as their iconic characters outside of the JURASSIC WORLD films for a theme park attraction.  As part of original content created exclusively for the new ride, Owen, Claire and Dr. Wu will shed light on their interactions with the dinosaurs along with facts and information about the imposing prehistoric creatures that first roamed the earth more than 65 million years ago.

This spectacular new ride will feature an original storyline that will take guests on a breathtaking excursion through the theme park as depicted in Universal Pictures and Amblin Entertainment’s film, JURASSIC WORLD.  It will soar to new heights with the addition of iconic dinosaurs from the movie, including the colossal Indominus rex and the magnificent aquatic Mosasaurus in her natural habitat.

For the first time, JURASSIC WORLD fans will have the chance to see this impressive creature and become immersed within her massive Aquarium Observatory.  Appearing to span over 60 feet in length and tipping the scales at over 30K pounds through stunning state-of-the-art visual effects, the Mosasaurus is a sight to behold as she moves just inches away from guests throughout her glass enclosure filled with the equivalent of 3.5 million gallons of water.

Universal Creative collaborated with Industrial Light & Magic (ILM) to bring the Mosasaurus to life and to capture the realism of her underwater environment using a combination of spectacular visual effects and cutting-edge technologies, including the use of motion parallax, a technique that shifts the guest’s perspective of the Mosasaurus as she moves throughout the tank.

The team also employed a series of lighting enhancements allowing the aquarium to intuitively shift from day to night, as well as visual changes to the environment during inclement weather, thus creating a variety of visual scenarios guests can experience based on when they experience the ride.

“Jurassic World—The Ride” captures the essence of the blockbuster movie and comes to life in collaboration with the award-winning and inspired minds at Universal Creative, the Academy Award®-winning special-effects visionaries at Industrial Light & Magic, a division of Lucasfilm, Ltd., Universal Pictures and acclaimed filmmakers Steven Spielberg, Colin Trevorrow and Frank Marshall.

When “Jurassic World—The Ride” opens this summer, guests will be welcomed to a dramatically reimagined space reflective of the hit films.  A fresh entry statement, stonework landscaping, and a contemporary redesign of the iconic JURASSIC WORLD gates, illuminated with billowing flames, will create the framework for the all new aesthetics.

Once guests pass through the queue, they will board specially designed rafts that will navigate the lush environs of dense vegetation and traverse new areas besieged with towering dinosaurs meandering at just an arm’s length away.  Encounters with such docile creatures as the Stegosaurus and Parasaurolophus will quickly turn awry as predatory Velociraptors and Dilophosaurus begin to wreak havoc, turning guests from spectators to prey.  When the Tyrannosaurus rex begins to battle one of the attraction’s new ferocious dinosaurs, the rafts will spill down a treacherous 84-foot waterfall as the sole means of escape.

Located adjacent to the ride will be a new elaborately themed “Raptor Encounter” where Blue, the beloved Velociraptor from the JURASSIC WORLD franchise, will engage guests in daring face-to-face encounters.

In addition, a new interactive “Dino Play” area will incorporate educational components within an inspired space where children of all ages can explore and excavate giant dinosaur fossils.

With so much to see and do at Universal Studios Hollywood, the new California Neighbor Pass invites guests to experience 175 days of fun for $149 when purchased online. Visitwww.UniversalStudiosHollywood.com for more details. Blackout dates and restrictions apply.