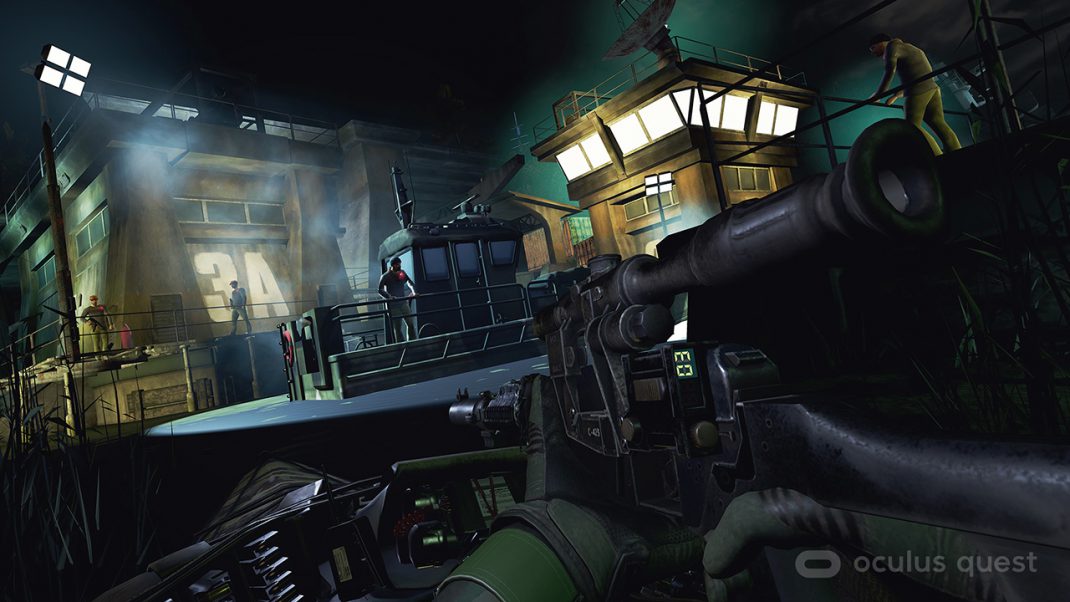 May 21, 2019 – nDreams, the award-winning virtual reality developer and publisher, are thrilled to reveal Phantom: Covert Ops, the studio’s first title in development for the newly released Oculus Quest. Created in partnership with Oculus Studios, the stealth action game, which will also be released on the Oculus Rift platform, will immerse players in the role of an elite and deadly covert operative dispatched into remote, hostile wetlands in a military kayak.

The year is 1991. The Cold War is over, yet intelligence indicates a significant force consolidating at an inaccessible former Soviet naval base off the coast of the Black Sea. As an elite Phantom operative, you have been tasked with infiltrating the facility, and eliminating the threat if deemed necessary.

Phantom: Covert Ops delivers the tension and thrill of becoming a lethal military asset in virtual reality. The body-awareness technology, tactile interactions, and an array of weapons and tools combine to deliver incredible immersion.

“We have been developing VR games for more than five years, and Phantom: Covert Ops is the culmination of all that hard work and learning,” said Patrick O?Luanaigh, CEO at nDreams, “I?m immensely proud of what the team has achieved, breaking new grounds in VR immersion to create a stealth action game built around 1:1 interactions, player choice, and an innovative and intuitive on-water movement mechanic.”

The game encourages players to approach each enemy encounter in their own way across an explosive campaign of missions with diverse objectives. Utilise an expanding, upgradable arsenal of weapons and equipment to sneak silently in the shadows, causing distractions to create a path to the objective. Or ambush hostiles head on by setting explosives and using the sniper rifle.

Phantom: Covert Ops will be available on Oculus Quest and the Rift platform in 2019.