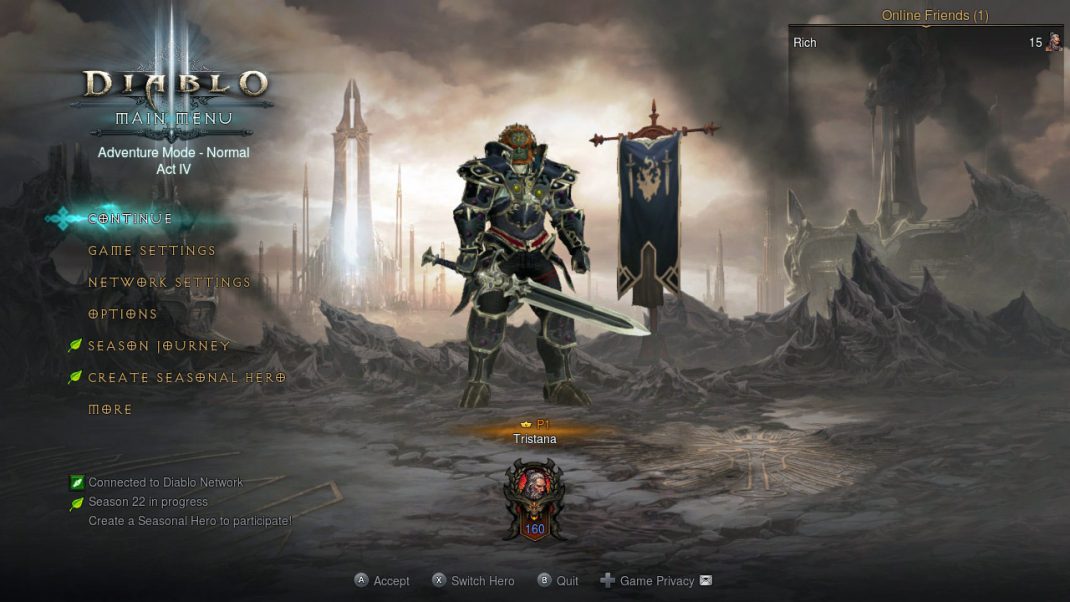 IRVINE, Calif.—September 13, 2018—Heed the prophecies, heroes—the newest front in the battle for the fate of Sanctuary will soon open! Diablo III Eternal Collection, the definitive version of Blizzard Entertainment’s acclaimed action RPG, arrives for Nintendo Switch™ on November 2, giving a whole new generation of gamers the opportunity to face down the horrors of the Burning Hells. Eager adventurers can secure their digital pre-orders starting today through the Nintendo eShop for Nintendo Switch.

Endlessly playable and continually evolving, Diablo III provides a lifetime of challenge and adventure, and the Eternal Collection includes the multitude of features, refinements, and updates that have been added to the game to date. On top fighting through an epic story campaign that spans the High Heavens, the Burning Hells, and beyond, players can earn bountiful rewards in Adventure Mode, a never-ending onslaught of activity with constantly shifting objectives across all of the game’s locales. Diablo III Eternal Collection also includes Seasons, a recurring game mode that encourages players to create fresh characters, earn exclusive Seasonal rewards, and crush hordes of demons to earn spots on their region’s leaderboards.

“The gates of Hell will soon be opening once again, and we couldn’t be more excited to have Nintendo Switch players joining the battle,” said Mike Morhaime, CEO and cofounder of Blizzard Entertainment. “Whether they’re bravely diving in alone or teaming up with friends, Sanctuary’s newest heroes are in store for endless adventuring—and endless loot—when Diablo III Eternal Collection launches on November 2.”

Diablo III Eternal Collection has been forged to take advantage of the Nintendo Switch System’s flexibility and versatility, whether players are using the Joy-Con controller or a Pro Controller. And true to Diablo’s spirit, players will have a wealth of options when it comes to cleansing Sanctuary cooperatively—parties of up to four can play together, either by sharing a screen on a single Nintendo Switch, linking their consoles together wirelessly, or connecting through the Nintendo Switch Online subscription service.

Diablo III is the fastest-selling PC game of all time.* The Reaper of Souls expansion introduced the mighty Crusader class, the infinitely-replayable Adventure Mode, and a host of other game-defining features, like the random loot-filled Nephalem Rift dungeons. In 2017, Rise of the Necromancer resurrected the fan-favorite Necromancer class from Diablo II, bolstering players’ forces with the gruesome powers of blood and bone. All of this is included in Diablo III Eternal Edition for the Nintendo Switch, on top of platform-exclusive bonus items, like Ganondorf’s cosmetic armor set, inspired by the iconic villain from The Legend of Zelda series.

Diablo III Eternal Collection for Nintendo Switch will be available on November 2 at retail stores everywhere and digitally through the Nintendo eShop at a suggested price of $59.99. For more information, visit https://www.nintendo.com/games/detail/diablo-3-switch