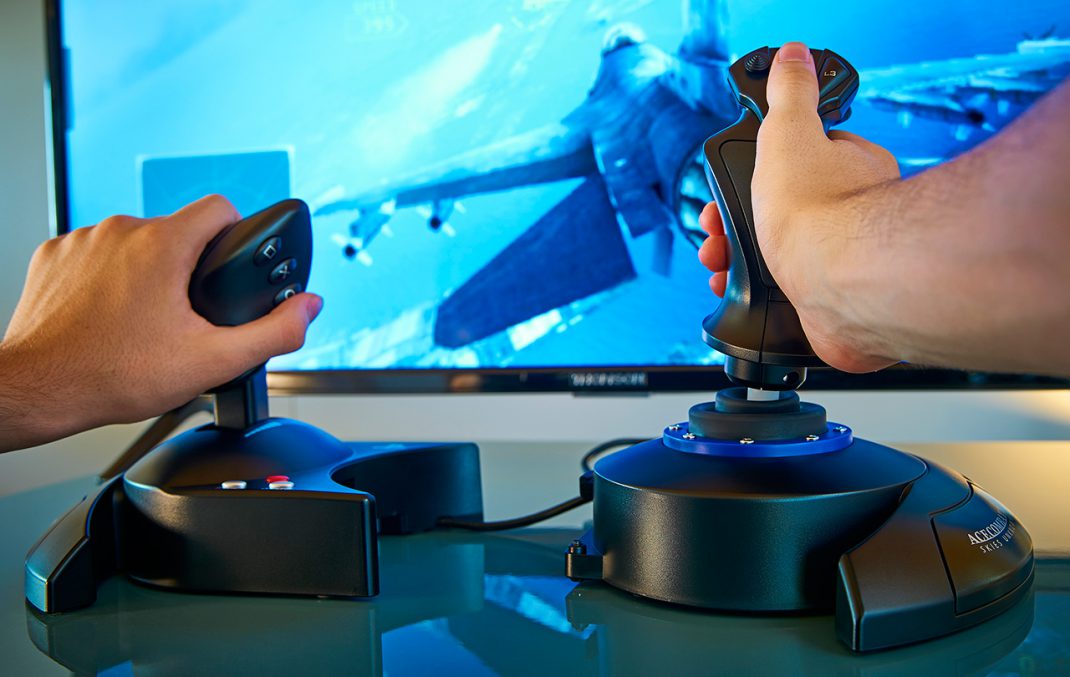 Thrustmaster is present at Gamescom on the publisher’s booth in order to show off the seamless compatibility between the flagship game Ace Combat 7 and the limited-edition T.Flight Hotas 4.

Visitors attending Gamescom in Cologne will be able to play with the new T.Flight Hotas 4 Ace Combat 7 Skies Unknown Edition joystick during its first-ever public appearance! The setup has been designed by the two partners for this event offering a demo of the new story in the iconic Japanese dogfight arcade game. The T.Flight Hotas 4 joystick offers a brand-new level of gaming realism for Ace Combat by providing a new way to play.

Both dynamic and accessible, while maintaining a level of realism, this demo for Ace Combat 7 Skies Unknown with the new Thrustmaster joysticks shows off the comfort, natural feeling and unparalleled precision that ensures the player can bring all of their fighting instincts and piloting reflexes to the game.

Something new for the players

The efficiency and ease of play offered by the T.Flight Hotas range of joysticks is a surprise to nobody, but Thrustmaster is setting the bar even higher and aims to enhance the way its community plays the games and the overall gaming experience even further.

This close collaboration with the developers of Ace Combat has allowed for full integration of the Thrustmaster joystick making the game more precise and more fun than ever in this latest release from the Japanese publisher.

Although the game is optimized for a third-person view (seen from outside the plane), it is also a thrill to use the T.Flight Hotas 4 Ace Combat 7 Skies Unknown Edition in first-person mode (viewed from inside the cockpit) especially for more experienced pilots.

This release is a celebration for fans of the franchise and other flight game enthusiasts, and Thrustmaster has made sure to keep everyone in its community to mind when releasing the two versions of the joystick:

The T.Flight Hotas Ace Combat 7 Skies Unknown Edition joysticks will also be compatible with all other games that earlier versions of this  joystick are compatible.

These new joysticks will be available when the game is released and more details will be coming soon.

Something for the Helicopter community as well!

Thrustmaster is also proud to be present on the ‘Air Missions: Hind’ booth to demonstrate joystick helicopter piloting prowess with the T.Flight Hotas 4!

Demo stations will be available to let you appreciate the smooth and dynamic handling of the gameplay via joystick (throttle and joystick combo in a single device) for a complete gaming experience and even deeper immersion.

Beginners, have no fear: a layout featuring all of the controls and buttons will be displayed next to the joysticks.