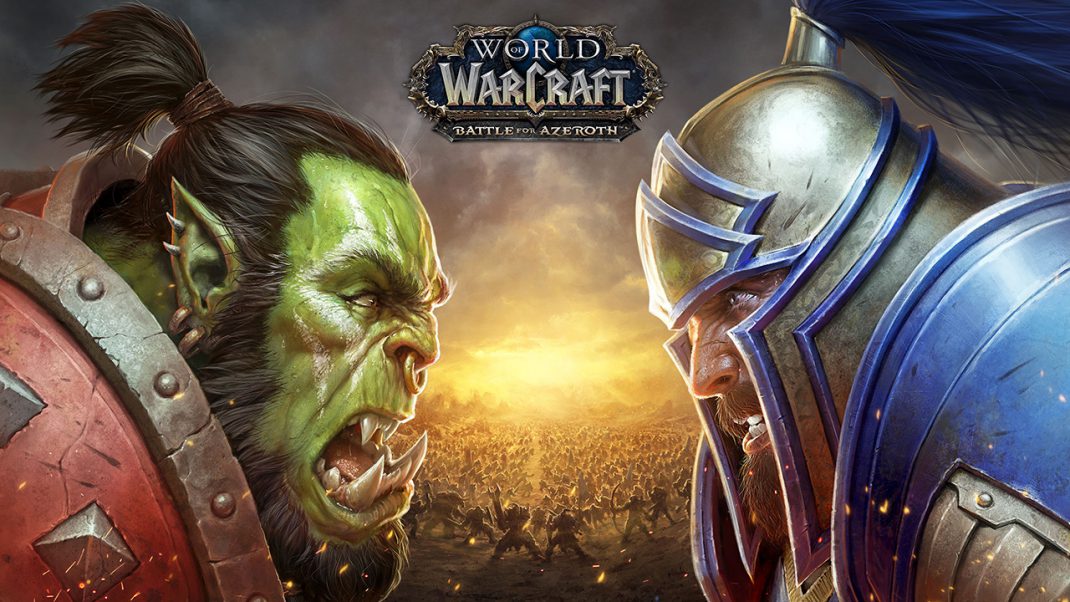 World of Warcraft: Battle for Azeroth Out Now

IRVINE, Calif.—August 13, 2018—The tensions between the Horde and the Alliance have reached the breaking point, and the entire world of Azeroth is now consumed in the fires of war. Battle for Azeroth™, the seventh expansion for Blizzard Entertainment’s internationally acclaimed massively multiplayer online role-playing game World of Warcraft®, is now live!

Today’s launch signals the start of a new era of all-out warfare between the Alliance and the Horde, as players around the globe set out on a vital mission to ensure that Azeroth’s future belongs to their faction. Defenders of the Alliance are called to the kingdom of Kul Tiras, ancestral home of Jaina Proudmoore, to enlist the aid of their legendary navy, while champions of the Horde must seek allies in the distant empire of Zandalar, home of the ancient Zandalari trolls. As part of the campaign ahead, heroes will clash for critical resources in myriad Island Expeditions; draw upon the strength of Azerite, lifeblood of the planet, to unlock new powers using the Heart of Azeroth artifact; prepare for a massive confrontation on the Warfront of Stromgarde; recruit new Allied Races to bolster their faction’s cause; and much more.

“Battle for Azeroth builds upon nearly 25 years of faction rivalry, history, and pride to challenge World of Warcraft players with the question of what it truly means to be a member of the Alliance or the Horde,” said Mike Morhaime, CEO and cofounder of Blizzard Entertainment. “This expansion is loaded with new content and features that draw upon that core conflict, but today’s launch is just the beginning—we’re excited for players to experience everything we have planned as the Battle for Azeroth unfolds.”

World of Warcraft: Battle for Azeroth is available in physical and digital standard editions (SRP $49.99) as well as a Digital Deluxe Edition (SRP $69.99). The latter contains an arsenal of in-game bonuses for a variety of Blizzard games, including the Seabraid Stallion mount (Alliance), Gilded Ravasaur mount (Horde), and Tottle the Baby Tortollan pet for World of Warcraft; an “Azeroth Is Burning” card back for Hearthstone®; a Primal Flamesaber mount in Heroes of the Storm®; Horde and Alliance sprays for StarCraft® II; and a collection of faction-themed cosmetic loot for Overwatch®.

Battle for Azeroth is also available in a retail-exclusive Collector’s Edition (SRP $99.99). In addition to the in-game items from the Digital Deluxe Edition, the Collector’s Edition contains a cache of faction-themed loot, including a collectible Horde and Alliance Double-Sided Mark of Allegiance; a limited-edition hardback of the novellas Elegy and A Good War, featuring exclusive artwork; and a Battle for Azeroth digital soundtrack. For additional details, visit https://worldofwarcraft.com/battle-for-azeroth.

Each edition of Battle for Azeroth also includes a level-110 character boost so players can immediately head to the front lines and fight for their faction’s cause.† In addition, new players interested in joining the fray for the first time with this expansion can do so simply by purchasing Battle for Azeroth and subscribing to World of Warcraft, which unlocks full access to the original game and all previous expansions.

World of Warcraft: Battle for Azeroth includes new content and features that put heroes’ fortitude and faction dedication to the test. Over the course of this expansion, players will be called upon to:

To learn more about World of Warcraft: Battle for Azeroth, visit the expansion’s official website at www.worldofwarcraft.com/battle-for-azeroth.

†Players upgrading from World of Warcraft Starter Edition must wait for trial restrictions to be removed (up to 72 hours) before using character boost.