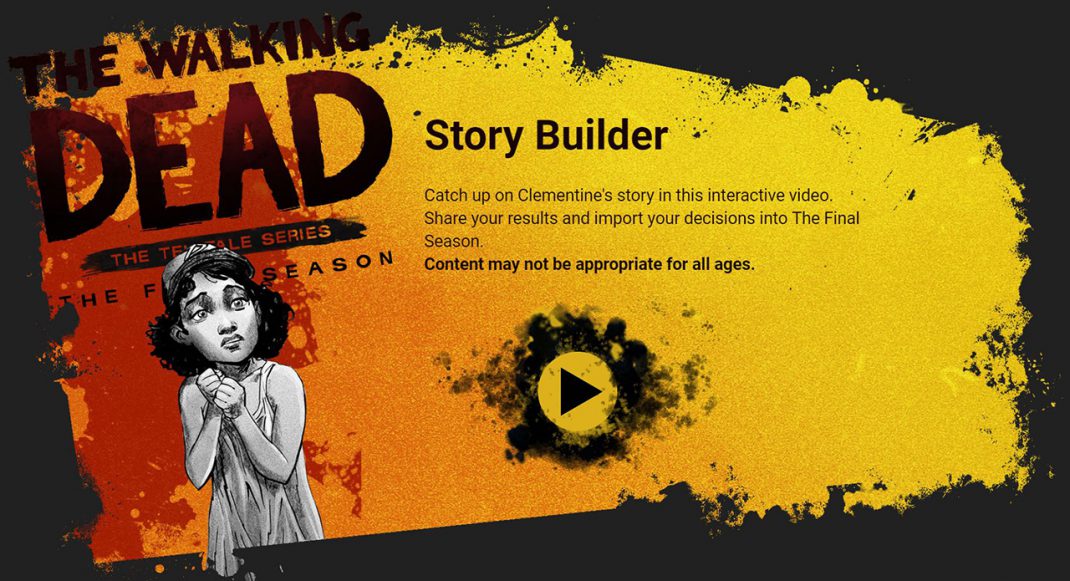 SAN RAFAEL, Calif., August 2nd, 2018 — Leading publisher and developer Telltale Games, along with Robert Kirkman’s Skybound Entertainment, today launched The Walking Dead: The Final Season Story Builder, an interactive, browser-based experience that allows you to relive the series’ most impactful story-branching moments. Your choices in the Story Builder produce a unique version of Clementine that can later be imported into the game itself. These choices will then be reflected in The Final Season. The Story Builder is available now and can be accessed here.

Upon completing the Story Builder, you will be given the option to sign in to your Telltale Games Account and save your results to the cloud. By logging into this same account when playing The Final Season on PC, Xbox One, PlayStation 4, you will be able to download your Story Builder choices into the game. The Story Builder will also be available within The Final Season and will be localized in multiple languages for launch. Alternatively, you can import your existing series save files into the game. For more information about transferring existing saves, please refer to this blog.

In addition to building a custom choice profile, those who complete the online Story Builder will also receive a downloadable poster that reflects their individual choices, with 32 total poster variations available. These posters were created by Telltale’s Todd Pound, while visuals for the Story Builder itself were crafted by noted comic book artist Dan Panosian and animator Daniel Kanemoto. Kanemoto also animated the very first The Walking Dead: A Telltale Games Series trailer in 2012.

Players who pre-order on PS4 and Xbox One will also immediately receive The Walking Dead: The Telltale Series Collection — which gathers all 19 existing episodes of the award-winning series into a single package — as a free pre-order bonus. PC players who pre-order on Steam, GOG, GamersGate, or the Humble Store will receive 10% off the full retail price. All pre-order offers expire August 14.

The Walking Dead: The Final Season will be fully dubbed in French, German, Latin-American Spanish, and Brazilian Portuguese. It will also be subtitled in French, German, Latin-American Spanish, Brazilian Portuguese, Italian, Russian, and both traditional and simplified Chinese. Episode one voice packs and translations will be available for download on launch day.

To date, The Walking Dead: A Telltale Games Series has sold more than 50 million episodes worldwide, earning more than 100 Game of the Year awards from outlets including Metacritic, USA Today, Wired, The VGAs, Yahoo!, The Telegraph, Mashable, Polygon, Destructoid, and GamesRadar. It also the received two BAFTA Video Games Awards for Best Story.

The Walking Dead is set in the world of Robert Kirkman’s award-winning comic book series and offers an emotionally-charged experience in which players’ actions and choices determine the course of the story across the entire series. For more information on the game, visit the official website and Facebook page, and follow Telltale Games on Twitter. For more information on The Walking Dead, Robert Kirkman, and all of his titles, visit Skybound.com.