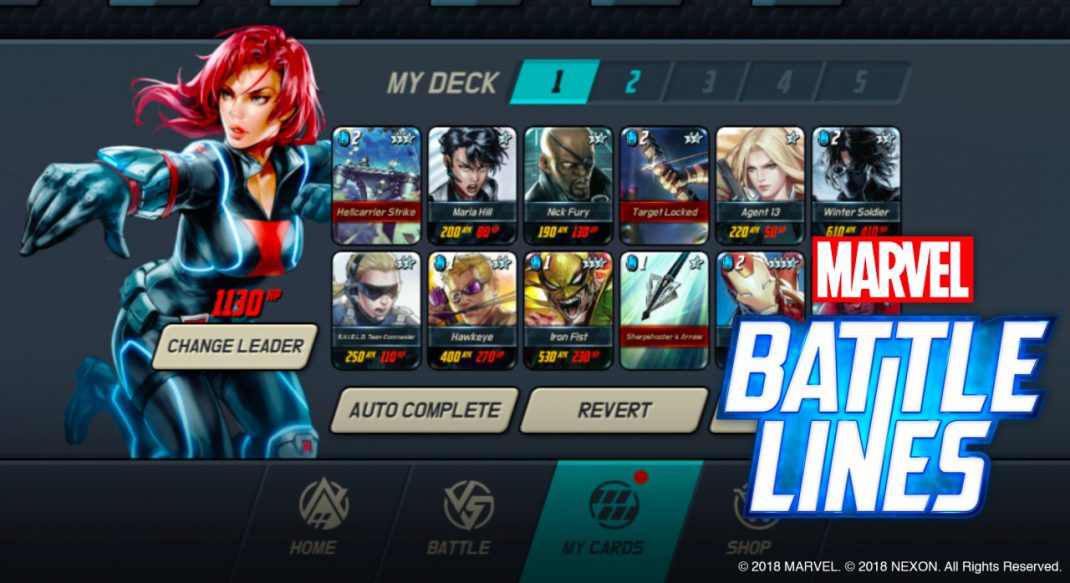 A player’s deck in MARVEL Battle Lines is made up of 12 cards from a roster of hundreds of iconic Marvel Super Heroes and Super Villains as well as powerful abilities that can be used in a match. The goal of a match is to strategically place cards in consecutive order on the 3×4 grid that makes up the field of play to create powerful battle lines and combinations that will damage their opponent’s health meter. Players will begin each turn with four cards in their hand and have the ability to swap their cards, play an action card or end their turn by either placing a character card in the field of play or moving a card already deployed to an adjacent tile to attack an opponent’s card. The first player to bring their opponent’s health meter to zero using combinations of battle lines with their deck of characters – three across, three adjacent, four down, an L-shape, etc. – will win the match.

In MARVEL Battle Lines, players collect and build the ultimate deck of Super Heroes and Super Villains to take into battle across an expansive single-player campaign with an original story written by Marvel writer Alex Irvine and a real-time turn-based competitive player vs. player (PvP) mode. MARVEL Battle Lines’ intuitive gameplay allows players to battle in single player and be competitive in PvP from the beginning. Collecting cards from each battle in the single player or PvP modes, players can build diverse decks of powerful Super Heroes and Super Villains, mastering their strategies to take on greater challenges and compete with the best in PvP. In addition to a campaign with an original story from Marvel writer Alex Irvine, an array of single-player activities will revisit beloved Marvel storylines and events and continue to challenge and reward players.

Fans of MARVEL Battle Lines can pre-register at www.marvelbattlelines.com to receive an exclusive Doctor Strange Super Hero card and 5,000 in-game gold. For more information and to stay up to date on the latest news, Super Hero and Super Villain card reveal following the game on Facebook and Twitter.