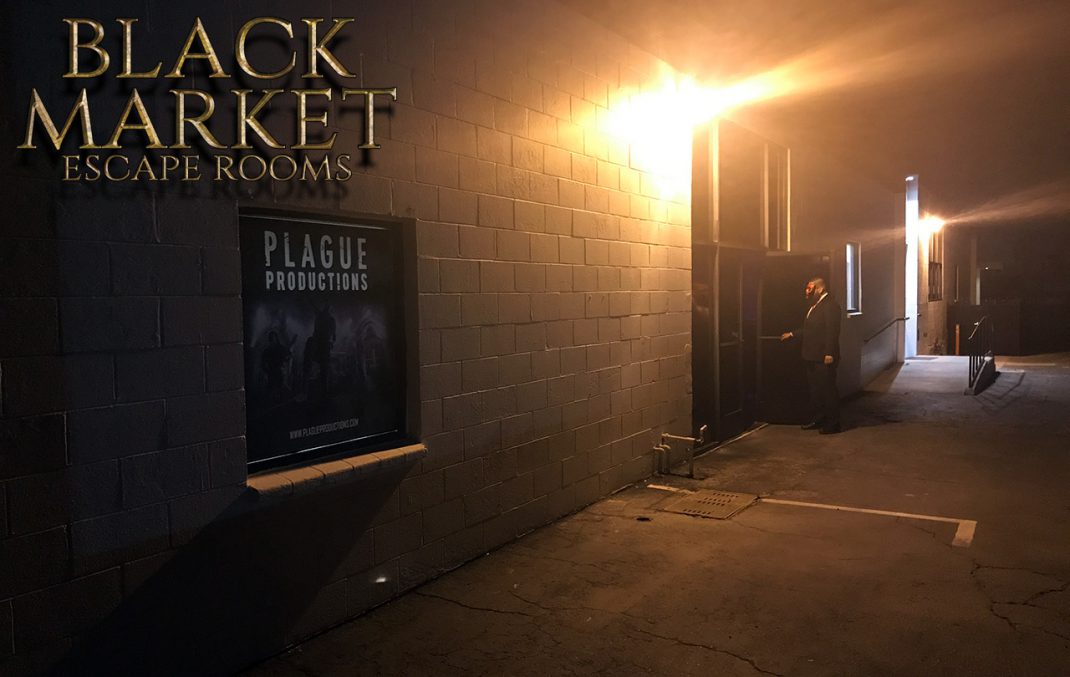 Jon Cooke, who was previously a designer behind some very memorable Knott’s Scary Farm mazes, has branched out on his own to create Black Market Escape Rooms. Located at a warehouse in Upland, CA, Black Market Escape Rooms features more intense, R-rated escape room challenges. The first of these challenges is called MURDERCO. The premise behind MURDERCO is that you are new members of an exclusive organization, the aforementioned “MurderCo”. This organization’s members pay for the “honor” of seeing human beings masterfully-extinguished by various “artists” (read: Murderous people). Things, of course, don’t go as planned, and you will have an hour to escape the MURDERCO.

We walked up to the inconspicuous Upland, CA warehouse and were pleasantly surprised to find no bright signage, etc. Just a hand-written note on the door stating “Wait Outside!” was welcoming us to the location – the whole thing just looks creepy. Now, there is some branding on the warehouse – so you know you are in the right place, they just don’t go out of their way to draw attention to the facility. It all felt very underground and industrial – the way I had hoped it would. When our appointment time struck, the door opened and a menacing figure ordered us inside. In this initial waiting room, the rules of the experience were laid out to us, we were allowed to use a restroom, and we were instructed to put our affects into lockers for safe keeping. Then, our group was allowed to choose the “artist” (read: Murderer) that we would get to see kill someone. We chose an individual named the “Juggernaut”, and then proceeded inside….. The escape room category is thoroughly saturated – at least, here in Southern California. So, it is vital that escape rooms offer something unique for people to grab onto – otherwise, escape rooms can get lost in the crowd. Thankfully, MURDERCO offers some seriously cool things that you won’t find in many other escape rooms. The biggest thing that separates Black Market Escape Rooms’ MURDERCO from the rest of the pack are its theatrical elements. Even the artists have their own characterizations and ours, Juggernaut, gave a great performance. Unlike most escape rooms, in MURDERCO you will interact with several NPCs (Non-Player Characters) throughout the course of your experience. Some of these NPCs might be good, many are most definitely evil. There is no “help line” in this experience, so I would recommend keeping your ears open as sometimes an NPC might drop a valuable hint to help keep you and your crew alive.

MURDERCO is touted as an R-rated experience, and persons under 18 years of age are not allowed into the experience. This is with good reason as, throughout the whole thing, you will be subjected to harsh language, some adult material, and some mild grabbing by the NPCs. This may sound daunting to those who avoid “extreme haunts” and the like, but don’t fret. While these things are included in the MURDERCO experience, it is more of a light smattering rather than a drenching in R-rated subject matter. It’s just enough to up the intensity while not so much that it detracts from the fun of the escape room puzzles. MURDERCO’s escape room puzzle elements provided a decent challenge at times, although it is certainly not the most difficult escape room we have been through. We had nine minutes left on the clock when we escaped, and we are a group of pretty experienced escape room challengers. There is a maximum party size of eight people in any one game, although we found that amount was a bit too much. The rooms of the MURDERCO can be cramped at times and the puzzles localized at points so that it left a few people in our party of eight with nothing to do aside from watch in the periphery. I would say five people would be a perfect amount for the MURDERCO. Please note that there are some physical challenges and obstacles to overcome in the MURDERCO, so wear comfortable clothing.

Another big part of the Black Market Escape Rooms’ MURDERCO is its roots in the haunted attraction industry. These scary elements, from pop out scares by NPCs to gory props and imagery, all add to the feeling of dread. Will your group escape? What happens if you don’t? These scary elements spice up the experience and even veteran escape room challengers will see some stuff here that they never have before in other escape rooms. Even better – the gore work here is all dry, so you won’t have to worry about ruining your clothes after leaving. The overall set design and prop work in the MURDERCO is excellent and I loved the detail that went into each area of the experience. The folks at Black Market Escape Rooms should feel extremely proud of their accomplishment – MURDERCO is really something you shouldn’t miss. MURDERCO is part haunted house, part escape room, and part interactive theatre. It skillfully-blends these attributes into an incredibly-fun escape room experience that is most certainly geared towards adults. MURDERCO runs Thursdays through Sundays and tickets cost $45 dollars each. You can find out more about MURDERCO and Black Market Escape Rooms over at their official website.