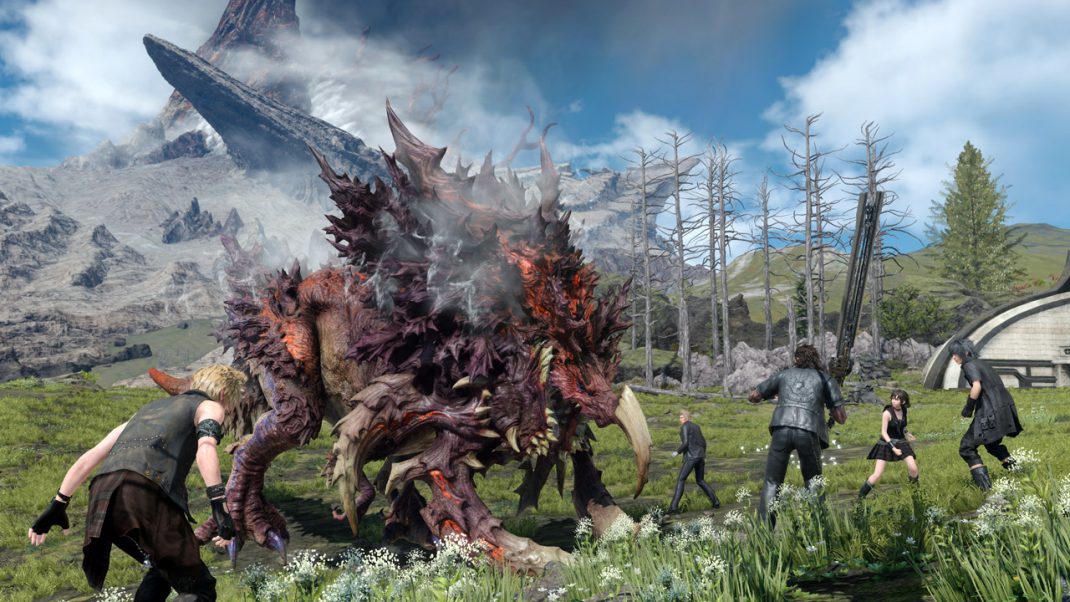 Final Fantasy XV has finally hit the PC platform with the aptly named Final Fantasy XV Windows Edition. This game puts players in the shoes of Prince Noctis, who is about to set off for a once-enemy kingdom in order to bring peace by marrying its princess. He is accompanied by three faithful friends, each with their own specialties. The foursome embarks on an ultimate road trip to get their friend to his nuptials when things go all kinds of crazy. This review will contain no spoilers for any of the plot points of the game, instead opting to provide that brief synopsis.

Getting around the vast game world is mainly accomplished by way of the Regalia, a high-end convertible that is Prince Noctis’ personal vehicle. You can upgrade and customize the Regalia throughout the course of your adventure, however some upgrade components will be a big challenge to get – making it feel very worth it once accomplished. Driving is mainly done in a sort of Autopia (a driving-based kids ride at Disneyland) way, with the car sticking to the road while allowing a bit of free drive. You can also “fast-drive” eventually, as well as have one of your companions do the driving for you. 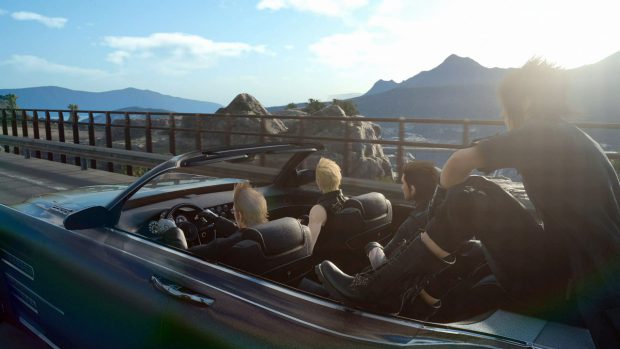 On your journey, you’ll encounter rest stops, tourist attractions, cities, villages, military facilities, caves, mines, swamps – the list goes on and on. There is so much to see and do in the world of Final Fantasy XV Windows Edition that you can spend hundreds of hours trying to complete everything. As usual in these kinds of games, you’ll also encounter NPCs that provide quests and other information of note. Food is a big component of adventuring in Final Fantasy XV Windows Edition. You will be able to purchase food and food carts, restaurants, cantinas, and more and gain various bonuses depending on the dish. One of your friends is the group cook and can learn new recipes to provide nourishment while camping. Speaking of camping, this is one of two ways to “rest” and turn in your experience points in the game – the other is lodging at a hotel or motor home. The difference is that, while camping, your friend can cook a dish for the party. While staying at a lodging, you cannot prepare a meal – but, you do gain a bonus multiplier on your experience points. Depending on the cost of the lodging, this multiplier can be well worth it. 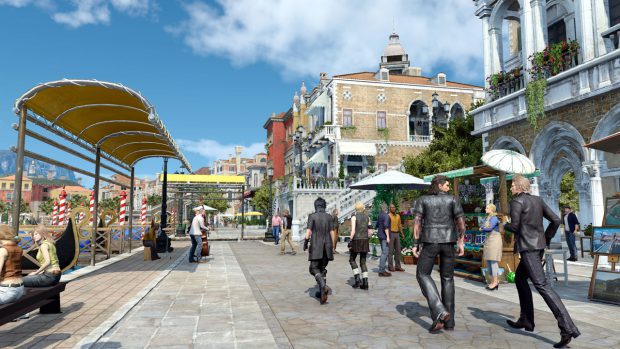 Combat is reminiscent of most action RPG titles, albeit with more tactical options than most. You have 4 weapon slots and can utilize a number of swords, spears, guns, large swords, shields, etc. There is a huge array of weapons, clothing, ingredients for you to buy and I was pleased with how the shopping/vendor system was implemented in the game. Your three friends always have your back and will fight along side you eerily like real player characters. You can issue individual commands to them to perform special abilities and attacks, and even do combo attacks with them when the right conditions are met. There are some moments though when things devolve into button mashing as combat can get somewhat clumsy when the screen is packed with enemies or your view is obstructed by beautifully rendered flora that gets in the way. Overall though, that is a mild issue in the grand scheme of an otherwise amazing game. 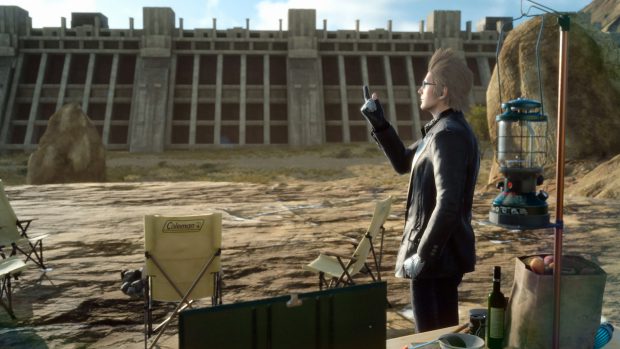 Visually, Final Fantasy XV Windows Edition is stunning, especially after downloading the optional 4K texture pack. The game’s lush landscapes just “pop” and the various creatures you encounter look amazing and act as you would imagine they should – the game world just feels alive. The game’s English voice actors have done a great job bringing their characters to life – however, if you prefer the original Japanese voices and subtitles, you can enjoy those as well. Owing to both the voice actors and writing is the banter and interaction between your group members. They are all full characters with backstories of their own and watching them interact is a joy. At one point, you get offered by one of them to train on the beach in the morning after camping. This leads to a fun 80’s style training montage and some great dialog. Other times, your party members will react to what’s going on around them – whether it be you accepting a quest (they like to give their thoughts on your missions) or driving past a herd of creatures. They also LOVE ribbing on each other and this only enhances the feeling that you are playing with other real people. This really is an amazing road movie of a video game.

Overall, Final Fantasy XV Windows Edition is an outstanding open world, action RPG that will delight both new and veteran players of the series. This is no simple PC port but is, instead, one of my favorite games of the year. 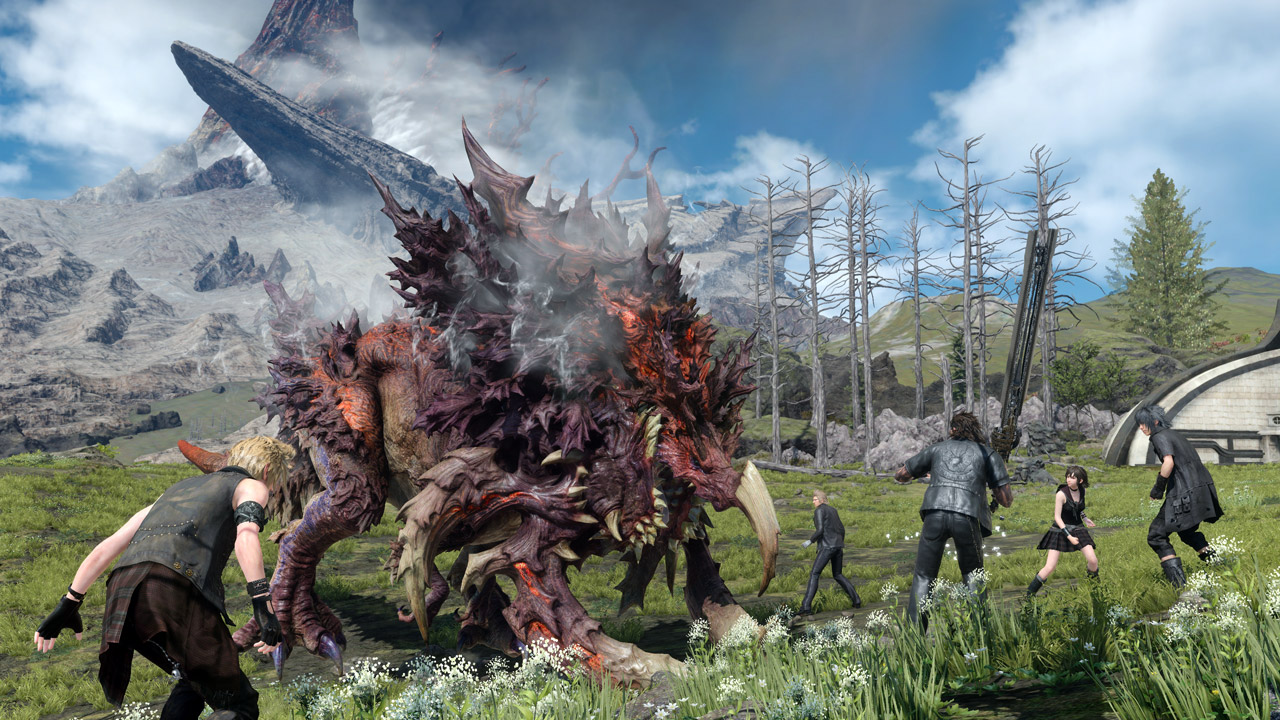