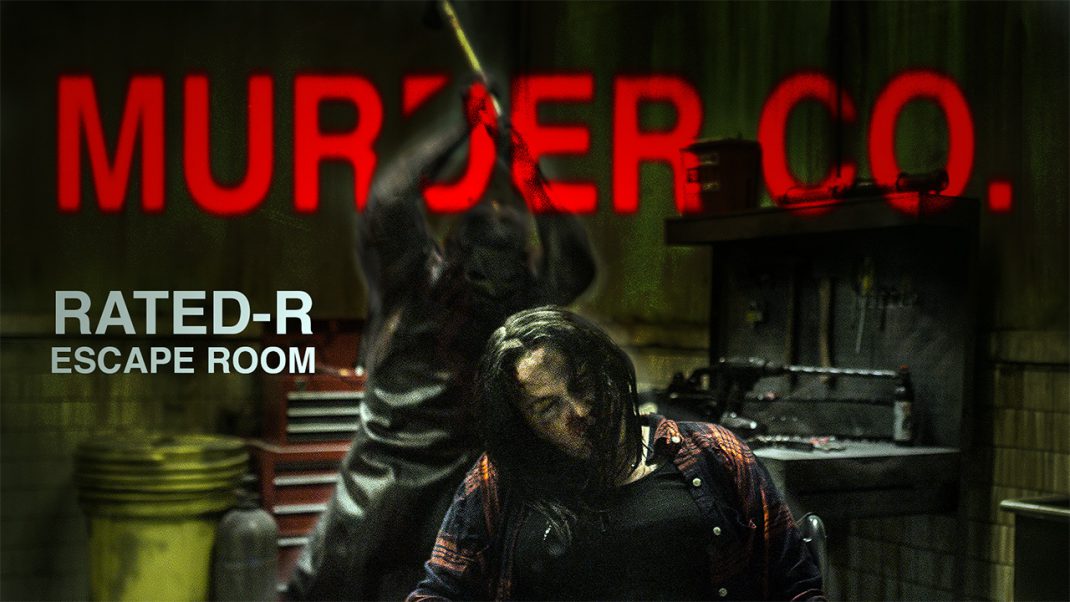 Upland, California, U.S.A: March 1, 2018 – BLACK MARKET ESCAPE ROOMS, a new immersive-based attraction company, announces the opening of MURDER CO, a permanent escape experience aimed at turning the attraction industry on its head. Moonlighting from their day gigs, a handful of theme park professionals have thrown the proverbial gloves off by thrusting guests into an adventure far too severe for the family-friendly confines of an amusement park.

MURDER CO is more than simply solving puzzles, combinations or finding keys to break out of a locked room. The high-level adventure incorporates unique entertainment elements matched with intense scenes of harsh violence, pitfalls and physicality. Groups of up to eight members find themselves trapped in a gore and chaos-filled race for survival.

MURDER CO: A high-priced, high-society underground black market sports ring enabling voyeuristic individuals to privately witness a live murder take place. Beyond the scant rumors found on the Black Web, not much is known about the enigmatic company. It is only after guests sign-up that the specific details of the ominous Murder Co will be revealed. If you’re still brave enough to make the plunge after signing a waiver, dangerous mystery awaits.

The experience was created by theme park designer, Jon Cooke, who was looking to push the parameters set by the day-to-day requirements in his industry. In response to founding his new company, Black Market Escape Rooms, Cooke says, “I saw so much potential story and show elements in escape rooms. I wanted to do something more so we aimed to create this unforgettable encounter.”

Regarding Murder Co’s intensity is attraction co-writer and director Ted Dougherty, who confesses, “We had to go to some extremely dark places that definitely left a few emotional marks.” Although the attraction may not fall into the category of an “extreme haunt,” it does contain content best reserved for those not easily offended or disgusted.

Murder Co includes state-of-the-art special effects typically seen inside major theme park attractions. Some of the other professionals Cooke has recruited include artists, technicians and designers who have worked with the Walt Disney Company, Universal Studios, Cedar Fair and the National Football League. Companies on board and supplying a stockpile of surprises are Gantom Lighting and Controls, Immortal Masks and Ghost Ride Productions.

Expect serious thrills as Cooke is no stranger to terrifying people based on his innovative haunted attraction designs for Knott’s Scary Farm. When conceiving Murder Co, he admits, “It’s what I have always wanted to see and do in an immersive attraction.” A living nightmare is one step away for those bold enough to cross into MurderCo.

TICKETS FOR MURDER CO ARE NOW ON SALE FOR LIMITED DATES AND TIMES. For more information on Murder Co, including tickets, operating hours and directions, visit www.blackmarketescaperooms.com or join us at FACEBOOK, INSTAGRAM @BlackMarketEscapeRooms