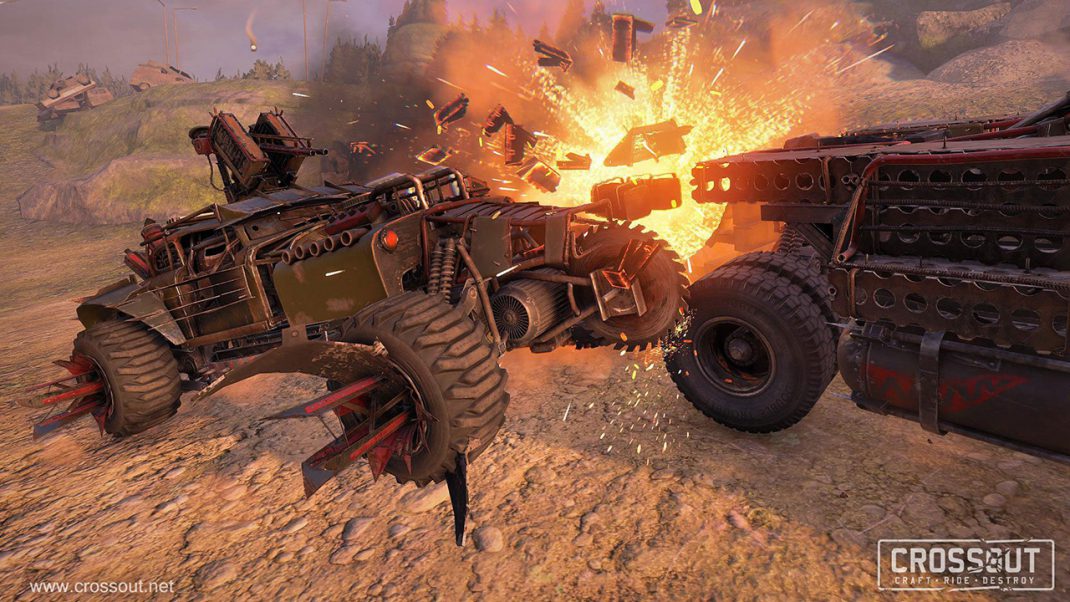 Thursday, February 8, 2018 — Targem Games and Gaijin Entertainment today released Update 0.9.0 for Crossout, the post-apocalyptic crafting-and-combat Action MMO. Update 0.9.0 released on PC today and will drop on consoles next week.  The update adds, among new features and other improvements, the seventh faction to the game – the Firestarters. Players allying with this group of fire-worshipping madmen are rewarded with new vehicle parts that can turn any battlefield into a scorched wasteland: Incendiary bombs, a kamikaze cabin, and a “meat grinder turned wheels” are only some of the new parts available now.

One of the hottest innovations of Update 0.9.0 is the ‘Incinerator’, a crude catapult launching gasoline-filled projectiles that set entire areas ablaze. Thus, if you see a neatly stacked pack of Jerrycans flying your way, make sure you hit the gas before it hits you. Also new is the ‘Fortune’ launcher, firing burning wheels in bursts of three that roll towards unfortunate enemies detonating on contact. And for the tactical arsonist, the new ‘Draco’ flamethrower deals direct damage, leaving enemy vehicles red hot and causing them to take double damage from any kind of weaponry.

Besides their arsenal of weapons, the Firestarters possess impressive machinery, such as a giant pair of blades called the ‘Meat Grinder’. This unusual contraption, placed on a vehicle chassis like a pair of wheels, allows Firestarters to move at equal speed in any direction – and even strafe sideways! Dealing damage on contact, the ‘Meat Grinder’ and other close-combat weapons are ideally combined with the ‘Harpoon’ gun, which allows players to grab a hold of other vehicles and prevent them from escaping. And with the new Firestarter cabin, ‘Werewolf’, players can claw victory from defeat, as it houses a small, wheeled drone strapped full of explosives. Launched upon destruction of the own vehicle, it gives the player 10 seconds to seek revenge by detonating it against an enemy in a daring kamikaze attack.

Other changes to Crossout include an increased maximum battle time in PvP from 3 to 5 minutes for players that have achieved level 10. Additionally, the time required to capture objectives was increased by 50%, giving players the chance to apply more tactically diverse solutions in combat and fully use all the varying capabilities of their vehicles.

Further information about Update 0.9.0 and the new Firestarter faction is available on the official website: https://crossout.net/en/diary/#/