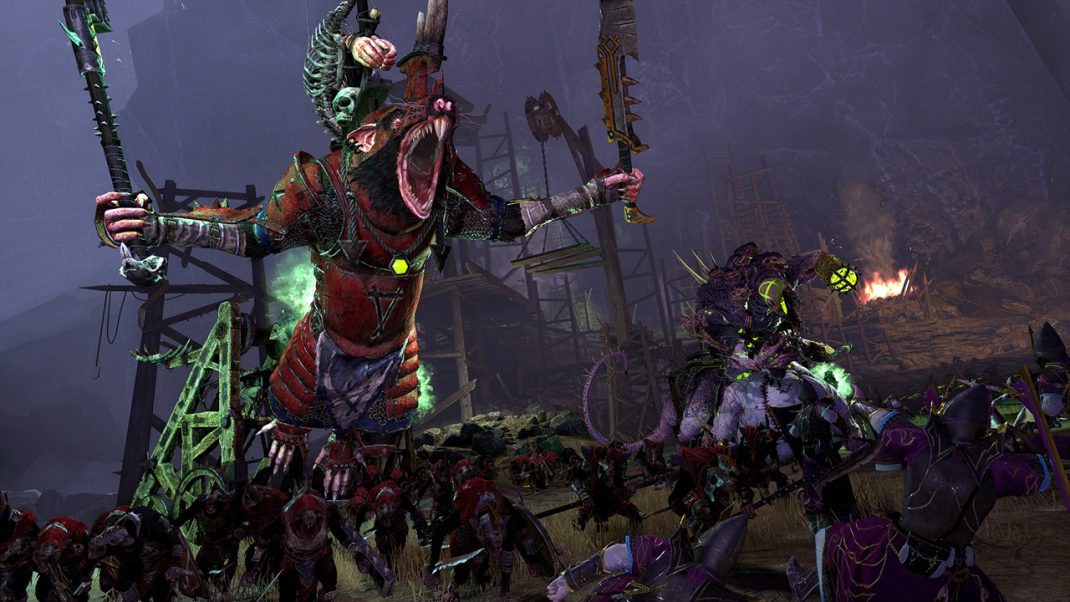 Creative Assembly and Sega have just released their latest game in the Total War series with Total War: Warhammer 2.  Ok so full disclosure here, I have been playing some version of a Warhammer game since the late 80’s and have been in love with the lore and the land ever since.  While I play more Warhammer 40k, there is tons I enjoy from the Warhammer Fantasy setting, from Blood Bowl to their mmorpg, Warhammer Online.  Total War: Warhammer 2 is a turn based and real time strategy game in the Total War scheme, meaning you are dealing with vast armies at your control.  Spending most of the early games on historical battles, the last two Total War games have been set in the Warhammer universe.

Total War: Warhammer 2 is set in four new lands from the Warhammer universe:  Ulthuan, Naggaroth, The Southlands, and Lustria.  The Empire, Greenskins, Dwarves, and Vampires from the last game are no longer options to play, now you choose to play one of 8 campaigns selecting either the High Elves, Dark Elves, Skaven, or the Slaan.  The story changes depending on which lord you choose and what army that lord belongs to, but there is a base story that has set up the conflict in these lands. 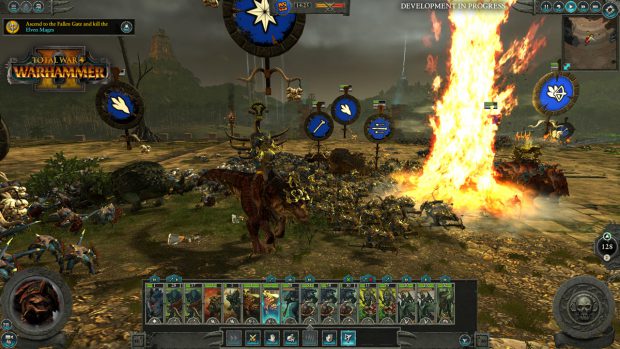 A millennia ago, Chaos began to invade the land of Ulthuan and threaten the very existence of the world.  Caledor, with the aid of the Slaan, created a vortex that would help disrupt the Chaos energies and to rid the world of the Daemon legions. However the plan was only partially successful and although Chaos was weakened, it continued to leak into the world. Caledor and the mages  became trapped within the vortex.  There, the mages continued to cast spells keeping Chaos weak and contained to the Chaos Wastes.

In the present day, a comet disrupts the vortex, weakening its hold on Chaos. This is felt by all the races of the land surrounding the vortex, and draws out the High Elves, the Slaan, the Skaven and the Dark Elves.  Each faction has their own plans for the vortex and the Chaos energy trapped within.  Depending on which faction you choose to play, you will either be fighting to preserve the vortex and prevent the spread of Chaos, or fighting to bring the Chaos energy under your control so you may be able to conquer your enemies.

Total War: Warhammer 2 is steeped in Warhammer lore.  The only issue I can see someone having with the story line is not being able to play as your favorite faction.  If you are not into the four factions available in the base game, then I can see it may not be as fun.  However, the storyline is solid and lives up to the great lore that Games Workshop has built around the Warhammer world.  The four factions are fascinating to me, even if they are not my chosen races to play in Warhammer Fantasy.  The High Elves are your typical good faction, the Dark Elves are debase and violent, the Skaven are just fun, and the Slaan are very colorful from an aesthetic point of view. 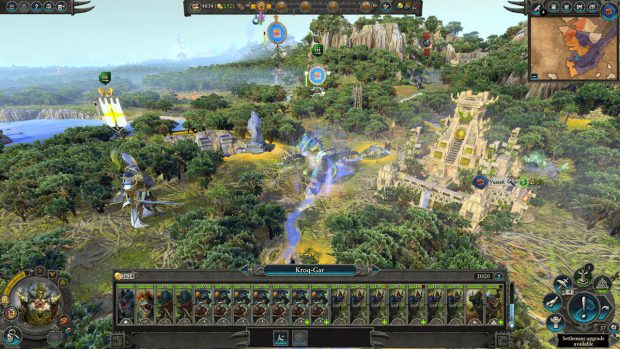 The gameplay of Total War: Warhammer 2 gameplay has some basic mechanics that works for all factions, but also has some unique traits that are only found in the faction that you choose.  The basic game is a combination of turn-based overland mechanics and real time strategy combat mechanics.  In the overland, you will make decisions that affects your faction, move your leader to attempt to intercept forces, and make decisions in terms of army makeup, economy and what to do with prisoners of war.

During combat, Total War: Warhammer 2 plays like a typical real time strategy war game.  You drag to select your troops and right click to move them to secure a section of forest, or to charge into combat.  Of course, there is much more to the game play then that in terms of tactics and strategy.  Your lord is an individual unit that adds combat bonuses to soldiers near him or her.  Depending on the troop type, the troop will react differently in combat and you will need to decide the best way to utilize that unit.  Your units can also retreat or go into a full blown rout if they take too much damage.

In addition to this, each faction has a different and unique gameplay element that occurs in game.  The High Elves have an intrigue element that allows them to influence other factions, economic situations, or diplomatic status.  The Dark Elves love their slaves, and can use these slaves to raise money or build structures.  The Slaan have the geometric web, which helps boost your provincial edicts, this will help keep your armies feed and funded.  Finally, the Skaven relies on food, the more food you have, the better your army is. 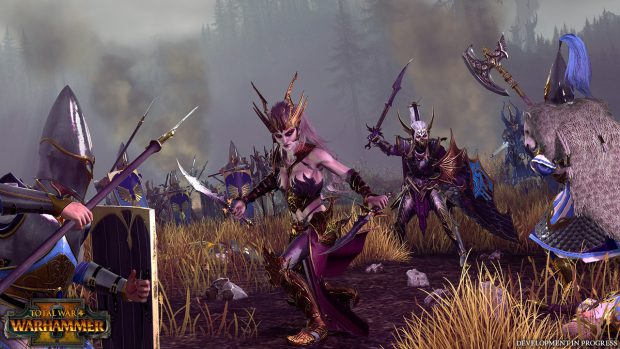 Total War: Warhammer 2 is by far my favorite Total War game in the series.  While I initially wasn’t drawn to the four factions, the gameplay of Total War: Warhammer 2 is so refined and complex that I was drawn into the faction and enjoyed every second I spend with the game.  Not that it was easy, my mind still struggles with these types of games.  While I love the Skaven faction personally, I found them the hardest campaign to play.

The aesthetics of the Warhammer world are well translated over to Total War: Warhammer 2.  The armies are dripping in aesthetic, from the polished armor of the High Elves, to the multi colored plumes of bird feathers on the Slaan.  The cut scenes are not fully animated, they are more like moving paintings then computer generated cut scenes, but the in game visuals are gorgeous.  Add in the vast amounts of individual troops and units that you can have on the battlefield and you will need a pretty beefy PC to keep up with the action.

The voice acting for Total War: Warhammer 2 is also very well done.  The Skaven speak in their typical jitter-speak, fans of the series will understand what I mean by that. The soundtrack is a beautiful thing to listen to and seems to know right when the tense moments happen to kick into high gear.  All in all, Total War: Warhammer 2 is the best sounding and looking game in the Total War franchise to date.