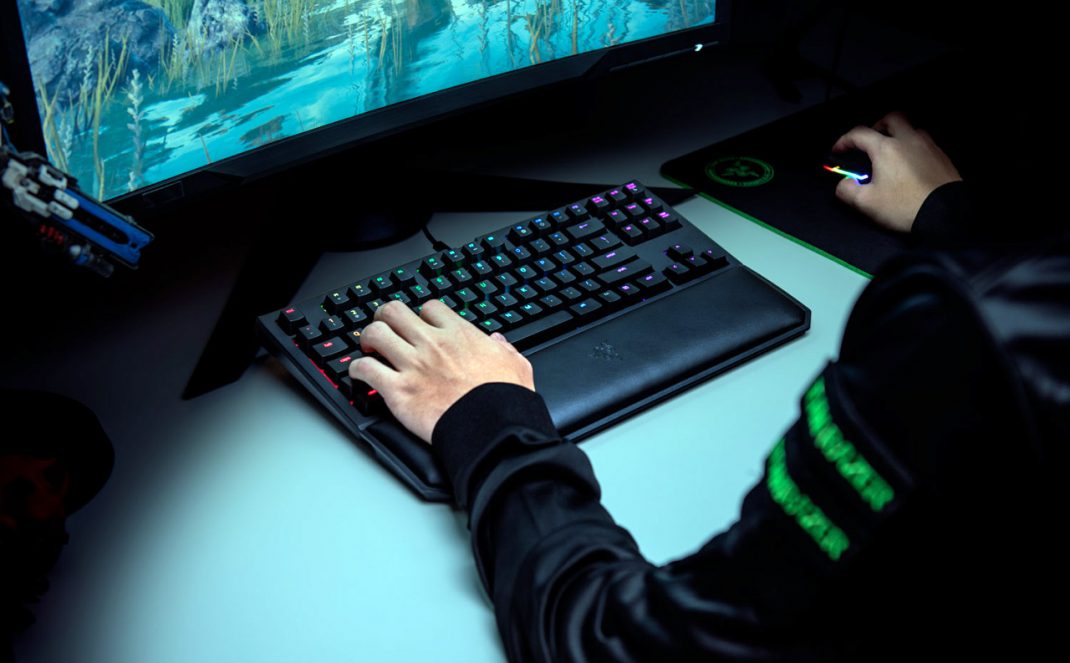 The first thing that struck me about the Razer Blackwidow Tournament Edition Chroma V2 was its small size. Most keyboards both gaming and non-gaming have a set of numbers off to the side to interchange with the ones that go across the top of your keyboard.  This is known as the numeric keypad and I know people who use those side number keys, but it is very seldom used in video-gaming.  That numeric keypad is mostly used when balancing the bills, adding and subtracting what someone owes them, mostly that kind of thing.  I know a VERY small group of people who game using up, down, left, and right keys instead of WASD and they then usually use the number pad because it is closer to their arrow keys.  This becomes less and less common the higher the player rankings until when you get to the pros or at least tournament players that “numpad” becomes near useless.  Programming types might use it but gaming it just becomes extra bulk in the way. This is why the Razer Blackwidow Tournament Edition Chroma V2 simply got rid of it!

With the Razer Blackwidow Tournament Edition Chroma V2, Razer removed the section gamers don’t need, the numbers pad, and placed a wrist pad on it instead to help prolong wrist comfort and tournament longevity.  That way you can practice and play longer! Also, because it doesn’t take as wide of a footprint on your desk, you can have more room on the side of your keyboard for things such as a larger profile mouse pad, a well-secured beverage or even a pastrami sandwich with extra pickles! 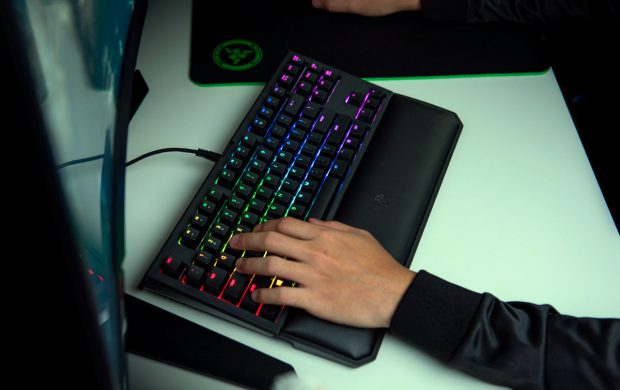 Another big feature of the Blackwidow Tournament Edition Chroma V2 is its ergonomic wrist rest.  Strangely, over the years these have faded out of connection with the keyboard becoming more of a separate thing mostly associated with the lower section of the mouse mat. As a result instead of both wrists getting rest when you are working on typing or gaming only the wrist that does any of the mouse work gets any of the cushiony comfort.  The result is that your wrists will start to become sore over prolonged use.  Everyone has heard of carpal tunnel syndrome by now and what was previously known as tennis elbow has become more associated with computer use.  People are notorious for not treating an issue until it becomes a problem and damage due to computer use is definitely one of them.  That’s where this keyboard is playing smart, it removes keys you don’t need and gives you ergonomic wrist rests that everyone can use.

The Razer Blackwidow Tournament Edition Chroma V2’s small size helps in carrying it to events or just on the road for when you need to do a little writing. This keyboard fits into most backpacks, making it terrific for traveling especially since the wrist rest can be removed for travel. In fact, even the USB cable has a quick-detach feature where it connects to the keyboard itself, meaning that it won’t get in the way of things when you are carrying it around in your bag!

Being a Razer Mechanical Switch product means you can count on an 80 million keystroke lifespan – Razer has definitely done their stress testing!  Up until 2010 mechanical switches were only used for typing because they seemed to be the only ones who needed to type keys between 60-100 times a minute, then Razer realized that competitive gamers were hitting those speeds and so put mechanical switches in their keyboards.  So a type of key switch that was once an obscure workplace tool helped usher in a new renaissance in the world of e-sports.  If you have ever watched professional a StarCraft tournament, you will see the insane level of moves made per second that some of those players are capable of. 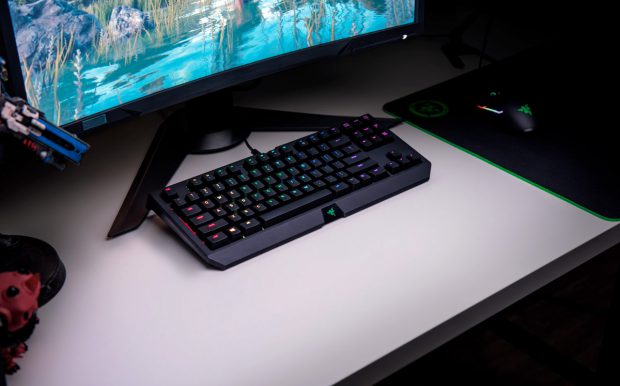 Also of great usefulness if the ability to program key macros on-the-fly so that you are able to top you speeds by removing repetitive strokes.  The keyboard also includes 10 key roll-over anti-ghosting and it purrs along at a 1000 Hz Ultra-polling rate. This key switches are of the clicky variety, so they should add some audible satisfaction to your keyboarding.

Now for one of my parts and least important one the Razer Chroma customizable backlighting with 16.8 million color options.  It is rather pointless for the most part but darned if I am not in love with being able to make it “shiny”. I did put black lights in my rig for pretty much the same reason and I doubt I was the only one to buy it off that shelf.

The Razer Blackwidow Tournament Edition Chroma V2 is a beautiful and more compact replacement for full-size gaming keyboards that also manages to take tournament gaming to the next gaming level.  When it comes to gaming keyboards, this model’s portability and reliability is hard to beat. The Razer Blackwidow Tournament Edition Chroma V2 retails for $139.99 and is available now. It also deserves the GamingShogun.com Seal of Approval!