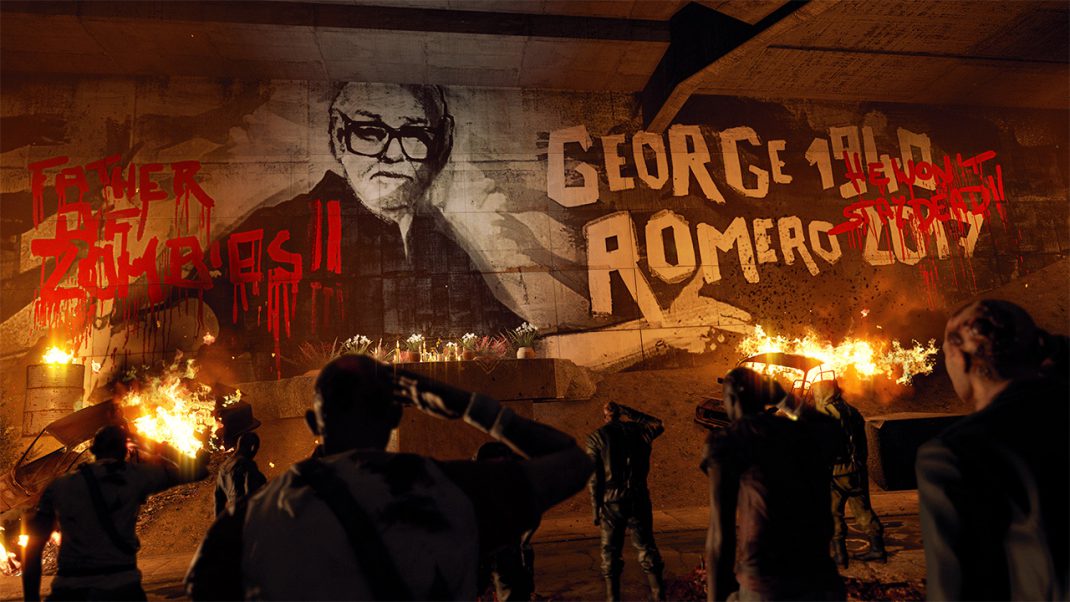 October 19th, 2017 – Wroclaw, Poland / Techland is proud to unveil a special commemorative mural to the Father of Zombies, George A. Romero, in Dying Light. The tribute has received the full backing of the iconic director’s son, George Cameron Romero.

Techland has also released a short video in which a horde of the undead puts their flesh-cravings aside to salute the man who invented the zombie genre of cinema and inspired generations of future horror auteurs — including Techland’s own Dying Light team.

Players can visit the graffiti-style mural in the area around Jaffar’s Workshop and pay their respects, as the art was added to the game on Monday as part of the Content Drop #1 update.

“When members of Techland reached out to me asking if I would be ok with them paying homage to my father in their game “Dying Light,” I was honored as I’m a massive fan of the game and I love the graffiti work they do! What a beautiful way to give his fans a lasting tribute on a wall that won’t get painted over. I hope everyone who is a fan of his, or mine, will have fun looking for the George A. Romero commemorative mural in the game and I hope everyone out there remembers that he was once called the most dangerous filmmaker alive, #filmsusedtobedangerous and thanks to him I will never forget that #filmisfearless.”

Considered by many to be one of the most important independent filmmakers of all time, Romero’s back catalogue of gruesome and satirical horror films includes: Night of the Living Dead, Dawn of the Dead and Day of the Dead.