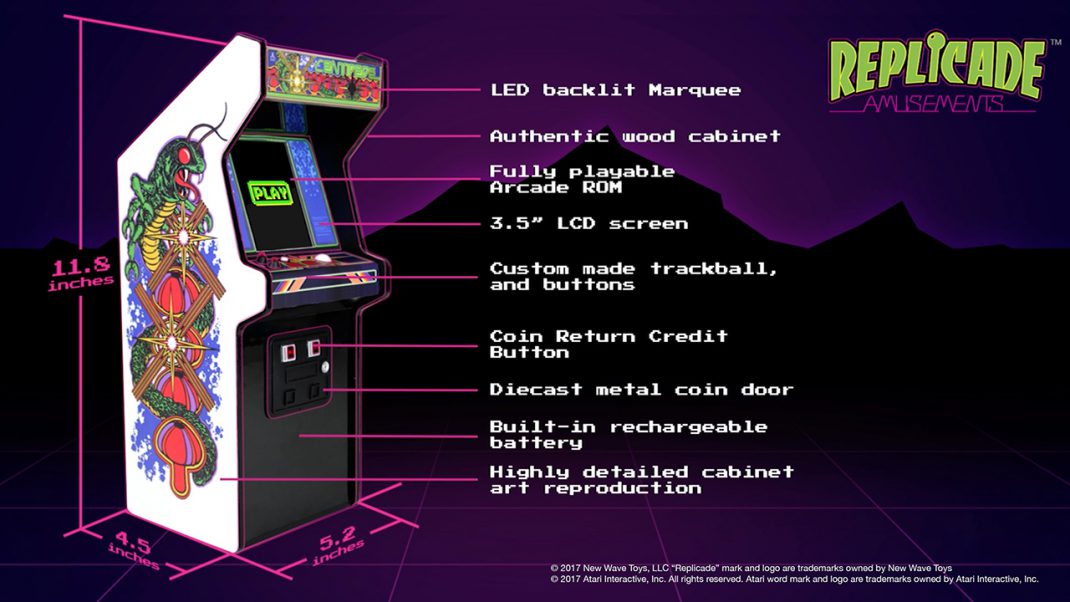 Replicade is a collection of fully-playable, original arcade videogames housed inside 12” tall wooden cabinets that faithfully recreate the arcade experience in miniature sizes. Each cabinet features a blend of traditional design and materials infused with modern technology:

New Wave also announced that their first Replicade release under their partnership with Atari® will be the 1980s arcade classic Centipede®.

The product will feature the original arcade ROM housed in an authentically recreated wood and metal cabinet complete with Centipede’s iconic control systems reproduced in 1/6 scale.

“We created Replicade Amusements to pay homage to the classic arcade games we love,” said New Wave Toys founder, Shilo Prychak. “There have been many ports of Centipede over the years, but we believe creating an authentic arcade game experience is as much about capturing the details of the cabinet art as it is recreating the gameplay,” he continued.

Built with the collector in mind, Prychak envisions a day in the not too distant future when arcade enthusiasts can deck out their office or game room with a collection of their favorite Replicade mini arcade machines. “We just wanted a way to bring old school arcade ambience in our homes at a fraction of the cost, and size of the vintage machines.”

Replicade mini arcade machines will be produced in limited quantities to further encourage the collectibility of these beautiful pieces of arcade art.

“We are excited to be collaborating with New Wave Toys to develop these very special collector’s edition recreations of our most iconic arcade games,” said Fred Chesnais, Chief Executive Officer, Atari. “These are the games that laid the foundation for the entire video game industry. We’re confident New Wave will do this legacy justice with the highest quality materials, and attention to detail.”

New Wave Toys also announced they will be conducting a Kickstarter campaign to support the production of the Replicade X Centipede cabinets and enable pre-orders starting at the Super Early Bird pricing of $90. The campaign is now live at http://www.newwavetoys.com.

“Our team’s experience mass producing hundreds of electronic videogame accessories, as well as retro multicades, gives us great confidence in our ability to deliver a great product to our campaign supporters,” said Prychak.

Regularly priced units will be available for $160 directly from New Wave Toys website after the conclusion of the crowdfunding campaign. Quantities allowing, Replicade units will also be available at select retailers worldwide beginning in mid-2018.