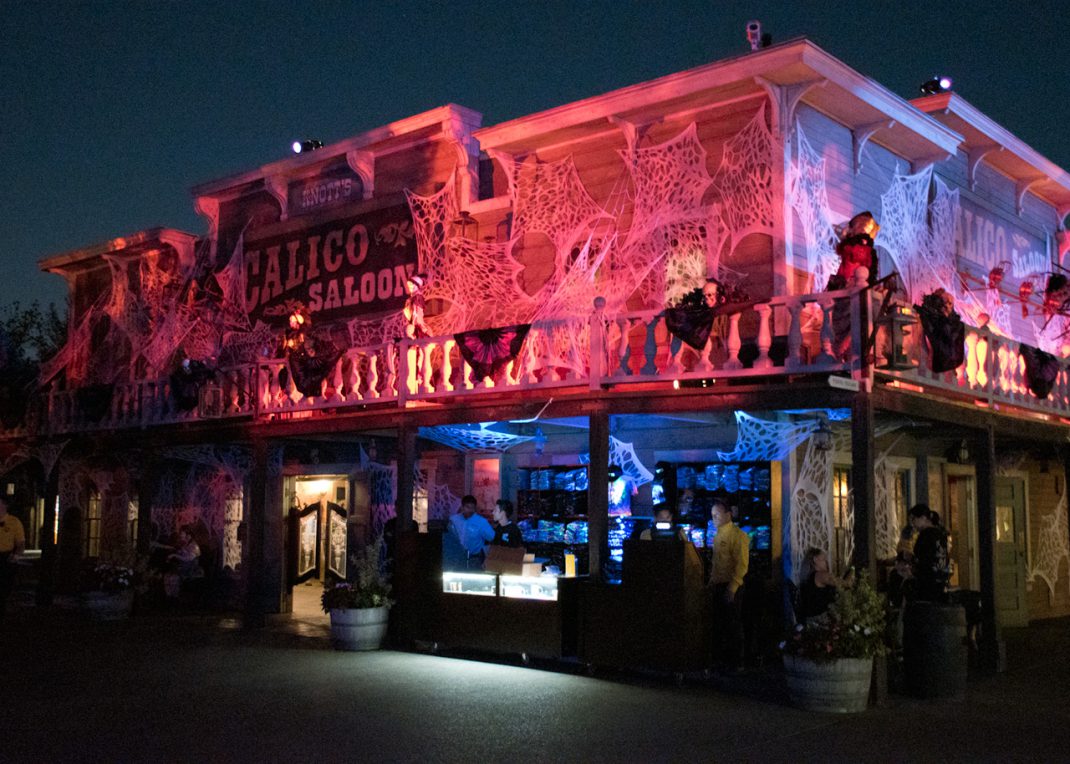 Knott’s Scary Farm, the progenitor of theme park wide Halloween events, is back for 2017 with some new mazes as well as updates to its returning ones. Also, there are hints that old habits are coming back for the better! Should you attend this year’s Scary Farm? Read on to learn more.

Knott’s Scary Farm feels like an event in a sort of transition. When park management changed several years ago, the new boss laid out rules that Scary Farm decorations, facades, etc should not interfere with day operations. As a result, the park ended up moving four of its haunted houses to the backstage area which, no matter how they try to theme it, is just a big parking lot. Also gone were the in-ride haunted experiences found within the Calico Mine Ride and Timber Mountain Log Ride. Before this, haunted houses were constructed in the park proper, which gave guests reasons to visit each of the park’s themed zones. Also, Scary Farm decorations and overlays were up during normal business hours, meaning that guests coming to visit the park during the day would be enticed into returning for the Scary Farm to see what it was all for (I know that’s one of the reasons my family started attending back in 1991).

There has been another change in park management, with new directives. The result is that this year’s Knott’s Scary Farm feels like a harbinger of great things to (hopefully) come next year! The decorations, facades, and overlays are starting to return. The Timber Mountain Log Ride now has an in-ride overlay which feels like a welcome return to the event’s roots. The park’s venerable Ghost Town zone has a slew of cobwebs and creepy crawlies attached to buildings and other things. The sheer number of cobwebs alone gives me goosebumps and was a great call by park designers! Next year, I hope to see even more of a return to yesteryear and that they bring those haunted houses from the backstage area into the park again. Also, we’d love to see a haunted experience in the Calico Mine Ride again. 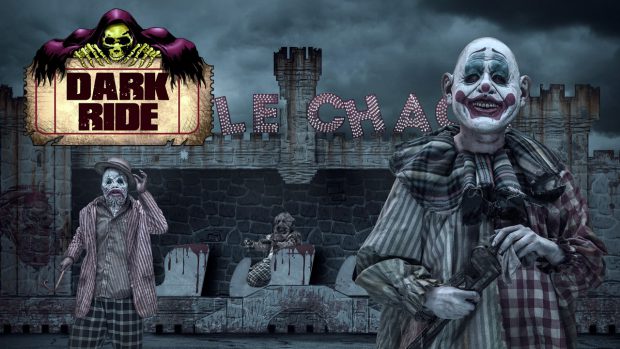 Moving on to the Scary Farm’s new mazes, we have Pumpkin Eater and Dark Ride. Pumpkin Eater is a gruesome maze with lots of gory eye-candy. It puts guests on the trail of a dark and mysterious creature known as the Pumpkin Eater that terrorizes a small town. The maze looks great, has some terrific scares, and is a great addition to the Scary Farm lineup. Dark Ride sends guests through a broken down carnival dark ride that has been taken over by shunned circus performers and carnival workers. The maze does a great job of presenting its fictional dark ride to guests, even having a faux ride track, animatronics, and corny jump scares that one finds on the real thing. My only complaint, if you could call it that, was hoping that guests would actually get pushed around the maze in a ride car in the way that Jon Cooke, designer of the maze, was in the Scary Farm preview event – even if only a part of the way through.

The returning mazes all have something new about them – some gimmicks working better than others, so I wanted to start with the best of them: Trick or Treat: Lights Out. Remotely-controlled flashlights and lanterns have been a hit-or-miss technology in the haunted attractions industry. They are prone to interference, breakage, and the elements at large. Simply put: The usually don’t work! In the case of my walkthrough of Trick or Treat: Lights Out, it worked splendidly. They have turned the lights of the returning maze off and given each guest a remotely-controlled flashlight. Throughout the course of the maze, your light will flicker, change intensity, hue, and even vibrate for feedback! The technology has never been presented better than in this maze and it gave a whole new life to the experience. Of course, now the issue will be to see if the Scary Farm can properly maintain the lights if they want to use them again next year (or through the end of the run, for that matter). 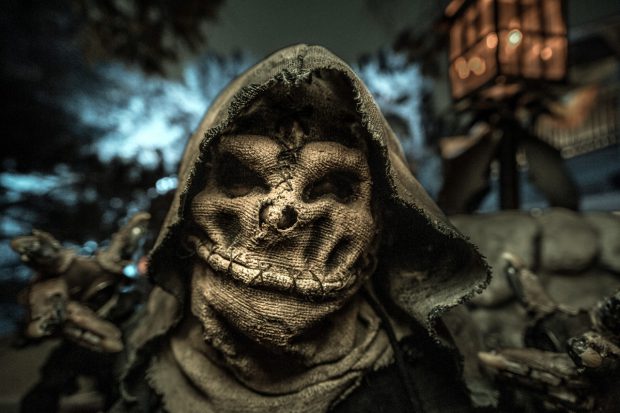 Shadow Lands, which was one of my favorite mazes in 2016, is back with some new route changes, decor updates, and new creatures. There isn’t much more to say about Shadow Lands, save for the fact that it is still awesome in every way a haunted house can be awesome! Special Ops: Infected is back with some new set pieces, including a tank! The fast and furious zombie shooting haunted house has a leader board now so you can track your number of kills. It seems like the light guns are holding up well and I think it would be great to see this return again next year. Voodoo also returns and, this time, guests go through the maze backwards. It may seem a bit gimmicky but the reversal of the route does actually give Voodoo new life. It could probably go another year in reverse before needing replacement. Tooth Fairy, a maze in desperate need of replacement, returns with a new Tooth Fairy creature as well as some other new surprises near the end of the maze. It is still gruesome and scary but is showing its age. Paranormal Inc. is another maze which, while still fun, should probably be replaced next year. And, I don’t mean replaced completely – it would be cool to see them do a new maze in the next fictional episode of the Paranormal Inc series. Finally, Red Barn returns with its crew of redneck cannibal folk and is holding its own. It was launched in 2016, and still has something to offer guests in the way of scares.

The street zones have always been a big part of the Knott’s Scary Farm experience, and 2017 is a GREAT year for them. In Ghost Town Streets, the decorations are in full effect and the monsters are doing a great job – even on the always rocky first night of performance. I expect it will just get even better as they settle into their roles. The CarnEVIL area of the park has some new set pieces for the clowns to work with and the Dark Ride maze also gives them some material as they can assault the guests waiting to get inside. Camp Snoopy, known as The Hollow during the Scary Farm, is killing it thanks to its characters creating backstory. Last year, the witches of the Hollow began doing impromptu shows, fleshing out their backstories and adding a lot of flavor to the zone. This year, they have park-backing and special effects to work with as well! Fiesta de los Muertos is back, and does a great job given the brightness of the area and lack of fog to use as concealment. With the heart that the scare actors put into this zone, I hope park management will give them some new set pieces and decor next year instead of using the area to prop up a DJ stage and dance zone (who comes to the Scary Farm to dance?). 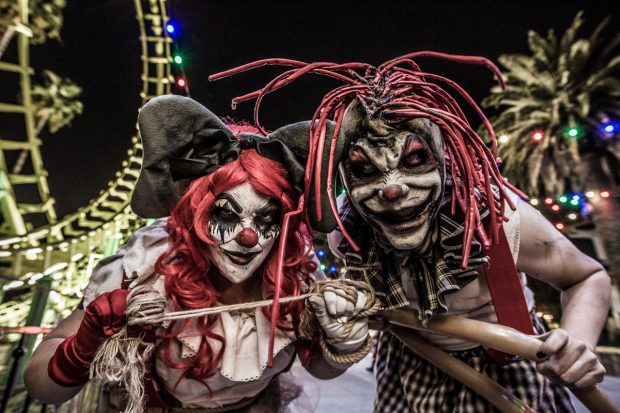 The in-ride overlay has returned for 2017 in the Timber Mountain Log Ride “Halloween Hootenanny”. The decorations stay up during the day, giving guests some fun Fall flavor, while the scares ramp up in the evening. In case I haven’t mentioned this enough in this review: In-ride overlays and haunt experiences are excellent and should be done more next year! Now we just need to get monsters back in the Calico Mine Ride!

Of course, no trip to Knott’s Scary Farm would be complete without taking in Elvira’s show! According to the Mistress of the Dark, this will be her final year at Knott’s Scary Farm, so be sure to check it out! As for her last show – how was it? It was a blast! Lots of yucks, dancing, and more. If you are a fan of Elvira or the Scary Farm, you need to make time to see it. Also returning is the park’s venerable stage show, The Hanging. This year’s show has a ton of material to pull from and manages, more or less, to walk the line between tasteless and funny. It’s not the strongest year I have seen for The Hanging, but definitely not the worst!

Overall, the 2017 Knott’s Scary Farm is terrific, and a bright harbinger of things to hopefully come to the park in 2018. If you like the log ride overlay, extra decorations, etc I urge you to grab someone working for the event during your visit and let them know. It is important to let park management know that these changes are the right course of action for the event. Knott’s Scary Farm runs on various days throughout October. You can find park and ticket information at its official website.